If you flooded during Ida, build back better through flood proofing

If you flooded during Ida, build back better through flood proofing

All of Hoboken’s investments in flood mitigation, however helpful, cannot eliminate future flooding

In the nine years since Superstorm Sandy, the City of Hoboken and the North Hudson Sewerage Authority (NHSA) have invested hundreds of millions of dollars to reduce flood risk. The City’s efforts have been guided largely by a comprehensive flood prevention strategy — Resist Delay Store Discharge — developed by a team of experts through a federal Rebuild by Design grant.

A major piece of the project’s Delay Store strategy has been the construction of three stormwater retention facilities underneath new parks on the west side of town with a capacity to retain 2.7 million gallons of water. Two of these have been built and the third one is under construction. In the past ten years, the NHSA has also built two wet weather pumping stations in Hoboken, with a third on its way.

Yet, according to the NHSA, Hurricane Ida dumped about 150 million gallons of rainwater on Hoboken in an eight hour period, completely overwhelming local efforts to date. It took two days for stormwater to recede completely from the flooded streets. Basements in low-lying areas filled with water resulting in the worst damage since Sandy.

Henri and then Ida, just ten days apart, brought home the reality that major, more frequent rain storms will continue to flood Hoboken despite the best mitigation efforts of the City. Property owners need to be prepared and to make vulnerable flood-prone levels of their buildings flood proof, something that many failed to do after Sandy.

In December 2013, the City of Hoboken amended its flood ordinance and zoning code to ensure that new buildings are constructed to withstand future flooding. These codes require wet or dry floodproofing below what is called the Design Flood Elevation. The wet floodproofing allows water to come into a building and then leave when flood waters recede without causing significant damage. This conforms to the Dutch concept of “learning to live with water.” The use of concrete, ceramic tile, brick and other water-resistant materials meet wet floodproofing requirements.

The Design Flood Elevation (DFE) is the base flood elevation associated with a flood that has a 1% probability of being equaled or exceeded in a given year plus the freeboard which is a margin of safety added to account for waves, miscalculations or environmental changes.

Dry floodproofing, which is the more costly alternative, involves designing the building so that it keeps flood waters out. In such cases, the building must be constructed to resist the hydrostatic pressure that would be exerted outside the structure by rising waters.

Both types of flood proofing involve raising heating, electrical and other mechanical systems above the DFE. Where this is not possible, such as an elevator on the ground floor, there could be a protective barrier that would be deployed if a flooding event is anticipated.

After securing a grant from the New Jersey Department of Community Affairs, the City hired the firm of Princeton Hydro to work with City of Hoboken staff to develop Resilient Buildings Design Guidelines which was published in October 2015. This report details how residential and commercial buildings can be flood proofed in accordance with FEMA standards. Case studies are provided on existing buildings that were retrofitted with flood proofing measures appropriate for that site. By undertaking these measures, the building residents were able to realize substantial reductions in flood insurance payments. 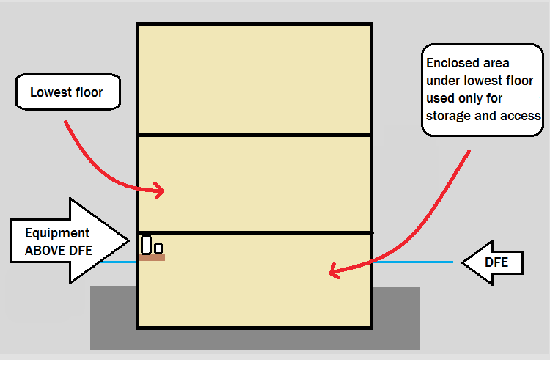 To minimize damage, uses below the DFE are limited to storage, building access, parking, and commercial spaces that are dry flood proofed. From “Resilient Buildings Design Guidelines.”

The report includes recommendations to preserve much of the ground floor features that help to maintain a lively streetscape that exists throughout much of Hoboken. Non-residential uses such as commercial offices and retail spaces are permitted below DFE. Parking and storage are also permitted below the DFE.

To minimize damage, uses below the DFE are limited to storage, building access, parking, and commercial spaces that are dry floodproofed. From “Resilient Buildings Design Guidelines.”

Existing buildings that are not flood-proofed are vulnerable to serious damage. Hoboken and other flood-prone urban communities could further develop this idea by providing greater assistance to owners of existing properties to flood-proof their buildings. Providing a program of technical assistance would certainly be a low-cost approach. Providing some combination of grants or low-interest loans would enhance the success of such a program.

It also remains to be seen if any major infrastructure projects will be initiated to begin separating stormwater from sewerage pipes. These combined systems are a major problem in municipalities throughout the region and contribute to much of the flooding problem. They are also a major source of pollution for the Hudson River and other bodies of water when rainstorms overwhelm sewerage treatment plants and sewerage ends up being dumped into waterways. Thus, the warning: don’t go swimming or boating after a major rainstorm.

Hoboken floods worsen as Ida, Henri put stormwater management strategies to the test
Rebuild by Design floodwalls would have had no impact on Friday’s flash flooding
New York City’s flood hazard maps found to be inaccurate; so what about Hoboken?
Sea level rise will put half of Hoboken underwater by the next century
Are Hoboken’s proposed floodwalls based on overstated risk of another Superstorm Sandy?
Walling off Hoboken’s waterfront meets fierce resistance
Dutch-led team: Resist, Delay, Store, Discharge: a comprehensive strategy for Hoboken
79% of Hoboken falls into FEMA’s new flood zone!