A generation ago, Hoboken’s waterfront was a gritty, industrial maritime port, inaccessible to the public. Today, the city’s public waterfront park along the Hudson River is enjoyed and treasured by all. On the upland blocks, people have invested in some of the most valuable real estate in the region, with condo units selling for upwards of two and three million dollars.

After Superstorm Sandy, the federal government developed a competition to develop innovative solutions in response to the dual threats of extreme weather events and rising sea levels. Some of the world’s leading professionals formed teams and submitted proposals for this program, entitled Rebuild by Design. Hoboken, a densely populated urban community, was hard-hit by Sandy not so much along the higher elevations at the waterfront, but in the lower-lying western portion of town away from the Hudson River. A HUD jury awarded the mostly Dutch OMA team a Rebuild by Design grant and assigned it the task of developing a comprehensive flood mitigation program for the Hoboken area. Last year, HUD provided a $230 million grant to implement this program that featured “resist/delay/store/discharge” components.

As the program now stands, the bulk of these funds will be devoted to the “resist” strategy aimed to prevent another surge from breaching the north and south ends of town. In December 2015, word spread throughout north Hoboken about the five alternative concepts for sea walls, flood walls and other barriers to block another Sandy-like surge. The response was swift and furious. People did not want a wall as high as 18 feet along the waterfront. Nor did they want a barrier running down their historic, brownstone-lined streets.

The New Jersey Department of Environmental Protection (NJDEP) which now manages the Hudson River Rebuild by Design project received over 250 strongly worded comments from the public, filling some 344 pages. Overwhelmingly, people objected to the various “resist” structures. The following excerpts are representative of most of the comments submitted:

Matthew and Carey Begley: I am writing to express my very strong opinion that moving forward with any of the B, C, or D concepts would be a tragic mistake for the entirety of Hoboken. My young family and I specifically moved into Hoboken, due to proximity to NYC, but also because of the beautiful, unparalleled access to the waterfront and its NYC views.

Hartmut Grossmann: The walls destroy the waterfront and thus a core attraction and feature of life of Hoboken. The . . . waterfront of Hoboken is a jewel of the city. It is used by all residents for recreation, exercise and enjoyment and links up with the waterfront in Jersey City, Weehawken and beyond. Plan B essentially destroys access to to the waterfront in the North.

Laura Edelman: The waterfront is a HUGE part of our city. We worked so hard to make it what it is. These plans will ruin our city, our property values. We must maintain our views — it’s too integral to what makes Hoboken special.

Melissa Abernathy: If we need to balance surge resistance versus community access to and enjoyment of the waterfront, I prefer the lower-impact barriers, even if flood abatement is lower.

Cathy McCabe & Jill Popovich: To create a wall of any sort that goes down a tree-lined street like Garden Street or obstructs the open, unobstructed views and access of the waterfront would impact not just those of us that live on the waterfront but all residents that benefit from the beauty. This would forever change the appeal, character and charm that Hoboken has worked hard over the years to create.

Gina Giannasio: I am opposed to any walls that are directly in front of residential or commercial buildings in which the jewel of Hoboken (the Hudson River) is completely cut off from view while walking. The city and several groups worked hard and long to maintain that open view to the public and any design that removes that view is just unacceptable.

Vigorous protests were also submitted by Hartz Mountain the developer at Lincoln Harbor in Weehawken and Jamie Lefrak the developer of Newport in Jersey City, just south of Hoboken.

The public response stunned Mayor Dawn Zimmer who came under attack at several open meetings. The mayor considered the flood prevention measures perhaps the most important legacy of her administration. But to her credit, she responded. She issued a statement on December 15, 2015 that included the following: I have heard and fully understand concerns about impacts to our waterfront and residential neighborhoods. I recognize that the Hudson River is both our City’s greatest treasure and potential threat to our community. For this reason, I want to be upfront that I would not support an alignment that would block access to our waterfront. I am also extremely sensitive to the impact on residential neighborhoods. 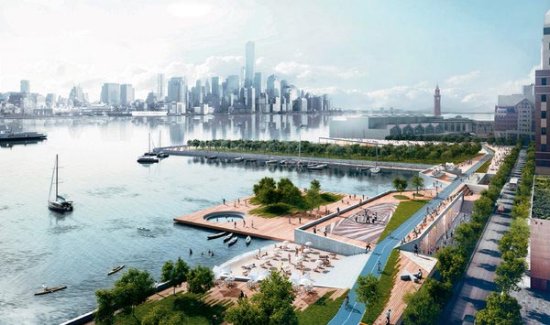 Massive wall at south waterfront depicted in rendering by the OMA team that worked on original Rebuild by Design project for Hoboken.

Mayor Zimmer held nightly meetings with neighborhood groups and condo associations that would be impacted by the “walls.” Instead of the maximum design flood elevations for a 500 year storm, the barriers were lowered to the minimum design flood elevation for a 100 year storm. The wall running along Garden south of Fourteenth Street, was rerouted along Fourteenth and then to the south along Washington Street, a largely commercial rather than residential neighborhood. The favored alternative was set back from the waterfront by a number of blocks to avoid blocking access to and views of the river.

There are now three alternatives and a final decision about the preferred alternative is expected by this spring or early summer. Despite the protests, Alternative 1 consists of a barrier along the waterfront running from Lincoln Harbor in Weehawken to Maxwell Place in Hoboken. This flood wall would range from 8 to 12 feet high and slope down as it ties into higher elevations. This scheme would provide the highest protection from a storm surge event, be the costliest to build and have the most impact on waterfront views and access. The NJDEP and engineers working on the project have said that it is a federal requirement for one of the alternatives to include maximum protection. It is uncertain how big a role public sentiment plays in a final decision. The Commissioner of the NJDEP will have the final say about which alternative is selected.

The other two alternatives are set further back at higher elevations that allow for lower “resist” structures ranging from 3 to 8 feet. The higher barriers along the western portion of the Weehawken Cove would be landscaped open space stepping down to the water. The dilemma posed by these alternatives is that a number of large residential buildings would be situated on the river-side of the flood barrier. In order to be protected these structures would need to implement a variety of flood proofing measures.

The three alternatives will now be tested with a flood modeling program to measure their effectiveness and possible negative impacts. Detailed cost-benefit analyses will also be conducted for each. A big question that needs to be addressed is the likelihood of another surge (scientists have described Sandy as an exceedingly rare event) vs. the cost of building these “resist” flood walls which will likely consume the lion’s share of the federal funding. The “resist” barriers, of course, will do nothing to protect against the typical flooding events that occur during heavy rain storms.