Early in the next century, more than half of Hoboken will be under water. By then, sea levels in the New York-New Jersey-Connecticut region will have risen six feet, permanently flooding over 600,000 residents in coastal communities. As early as 2080, sea levels could be three feet higher filling many towns in the New Jersey Meadowlands with water. Moonachie, New Jersey could be 70% under water. As early as 2030, sea levels could rise by a foot inundating nearly 60 square miles in the tri-state area. Teterboro Airport in the Meadowlands could be permanently flooded. This flooding is not the result of a storm surge or major rainfall event but the gradual but inexorable encroachment of water into coastal areas. And the cause is climate change.

These stark facts are documented in a new report written by the Regional Plan Association (RPA) entitled: Under Water: How Sea Level Rise Threatens the Tri-State Region. According to the report, “Permanent flooding from sea level rise is different than the intermittent flooding from storm surge or precipitation. Intermittent flooding recedes once a storm passes while sea level rise flooding is permanent and can be expected to encroach further inland over time.”

Hoboken began as an island surrounded by wetlands. The New Jersey Meadowlands, a tidal estuary, was once exclusively wetlands. Beginning several centuries ago, as the areas were settled, they were subject to draining and filling. With sea level rise, mother nature will seek to reclaim what she once owned.

In 2012, Superstorm Sandy, a storm surge event never before experienced in our lifetimes, had a devastating impact on the region and sparked many initiatives to respond to future flooding. Although experts warned not to devise remedies based on the last major storm, most projects did exactly that. The RPA report states: “current resilience approaches mainly focus on storm surge and do not adequately tackle the challenge of long term permanent flooding. None of the projects currently pursue a regional approach.”

Global warming is caused by the release of greenhouse gases such as carbon dioxide and methane into the atmosphere. The rising temperature heats ocean waters causing them to expand, resulting in rising sea levels. Over the past century, sea levels have risen about a foot. Over the past several decades, sea levels have climbed gradually at a rate of 0.14 inches annually. In the coming century, the rise will accelerate at an increasing rate. China is the leading contributor to greenhouse gases, followed by the United States.

China, the United States and 193 other countries signed the Paris Agreement of 2015 to limit future greenhouse gas emissions to avoid catastrophic warming. President-elect Donald J. Trump has pledged to withdraw from this agreement. Yesterday, President-elect Trump appointed a climate-change denier and fossil-fuel advocate as head of the EPA, thus guaranteeing that the United States will refrain in the coming years from confronting this crisis.

The reports states: “The flood waters of sea level rise won’t recede once a storm passes. They will be permanent and over time will inundate our streets and homes, intrude into our drinking water aquifers, fill our tunnels, basements and storm drains, saturate our brownfields and other contaminated sites and eventually overwhelm low-lying rail lines and wastewater treatment and power plants. They will permanently change our coastline.”

The report details the low-lying areas and critical infrastructure that will be impacted along the extensive coastlines of New York City, Long Island, Connecticut, and New Jersey.

The first remedy is to follow through on commitments to reduce carbon emissions. All levels of government need to plan now for sea level rise, making well-informed choices and difficult decisions. Then these plans need to be adopted and funded. 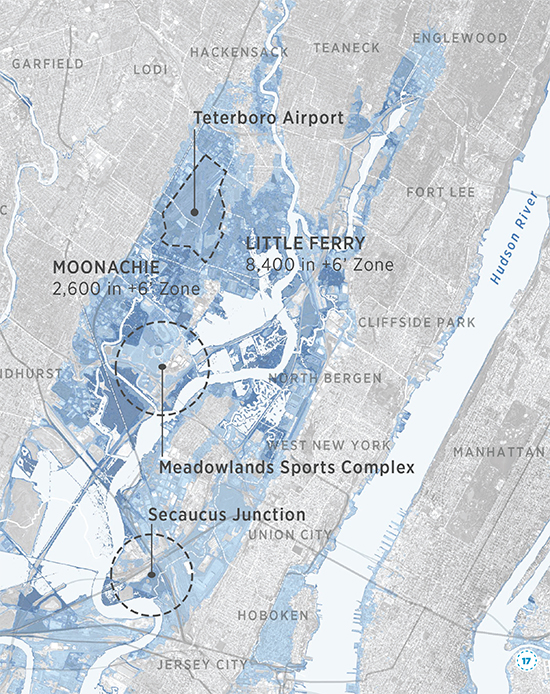 This image from the Regional Plan Association report, Under Water: How Sea Level Rise Threatens the Tri-State Region, shows large portions of the New Jersey Meadowlands and Hoboken that will be under water by early in the next century.

After Superstorm Sandy, HUD initiated a number of Rebuild by Design projects in this region to create innovative approaches to address future flooding. Much of the focus of these projects has been on storm surges rather than sea level rise. In Hoboken, the Rebuild by Design project will undertake a costly, quarter of a billion dollar flood barrier construction project to protect against coastal storm surges. Hoboken has also adopted new building standards that will require new residential units to be built above what is called the design flood elevation, thus protecting new residents from a 100-year storm. Lower levels that can be used for parking and commercial units would need to be wet or dry flood proofed.

The Regional Plan Association is an independent urban research and advocacy organization focusing on the tri-state region of New York, New Jersey and Connecticut. RPA seeks to improve the metropolitan region’s economic health, environmental sustainability and quality of life through research, planning and advocacy. Since the 1920s, RPA has produced three landmark plans for the region and is working on a fourth plan that will tackle challenges related to sustained economic growth, climate change, infrastructure and the fiscal health of state and local governments.

Under Water: How sea level rise threatens the tri-state region