Are Hoboken’s proposed floodwalls based on overstated risk of another Superstorm Sandy?

Are Hoboken’s proposed floodwalls based on overstated risk of another Superstorm Sandy?

Since 1970, I have lived and/or worked in a low-lying neighborhood in Hoboken, New Jersey. The property I bought in 1979 faced Newark Street between Park and Willow Avenues. During a storm, especially at high tide, the street and sidewalk would fill with stormwater and sometimes sewerage as well. These waters threatened my front doorstep numerous times, but never flooded the building. For more than 30 years, I had been paying for flood insurance but never had to file a claim. After I sold the property, there was Irene and then Sandy, two storms that far exceeded anything that I had ever witnessed before.

As Hoboken struggles with developing public policies, and most especially the Hudson River Rebuild by Design project that will involve a massive expenditure of funds, the probabilities of experiencing another storm comparable to Sandy is a fundamental issue that needs to be resolved. For this, we cannot rely on guesswork or an emotional response to the suffering and damage that occurred on October 29, 2012. We need to rely on the best science available. A clear distinction must also be made between a storm surge originating from the ocean and the more typical flooding that occurs in Hoboken from a surface water flood caused by heavy rainfall.

For most of us, understanding the science is a daunting task. Try wrapping your head around one of the studies that have sought to determine the return date for another Sandy. They are highly technical and filled with terms that are difficult for a layperson to decipher. This is made all the more difficult by the wildly differing conclusions reached by these research scientists. Was Sandy a 1,000 year tidal storm? A 500 year storm? 100 years? There is no clear consensus.

At the July 2016, Rebuild by Design public meeting held at Stevens Institute, Dr. Alan Blumberg an oceanographer who is director of the Davidson Laboratory at Stevens, made a presentation that showed major storms of the past from the years 1788 to 2012. Most of these tidal storms measured around 7 feet above the mean sea level. Sandy exceeded 11 feet! Dr. Blumberg stated that Superstorm Sandy was a 260 year event, that it had a 0.4% chance of occurring in a given year.

This information came from a study, authored by Dr. Philip Orton, also from Stevens, Dr. Blumberg and four other research scientists, entitled A Validated Tropical-Extratropical Flood Hazard Assessment for New York Harbor. Completed in January 2016, the study concluded that the last storm surge comparable to Sandy occurred prior to the year 1700. A number of other scientific studies have been conducted since 2012 assessing the return date of a Sandy-magnitude storm for the New York Harbor. One determined that Sandy was a 850 year event. Another concluded that it was a 1500 year event. A number of rationales were provided as to why Superstorm Sandy was such an uncommon occurrence.

At the opposite end of the spectrum, FEMA’s recent assessment for the area concluded Sandy to be a 100 year storm event. The flood hazard maps produced by FEMA are based on what it calculates to be the 100 year floodplain. If your property sits within that flood zone, certain requirements kick in for flood insurance, building requirements above the base flood elevation, etc. A number of municipalities, including the City of New York, have challenged FEMA’s latest, greatly expanded flood maps, claiming that they overstate the risk. Since the maps were last updated for New York City, FEMA increased the number of residents in the 100 year zone by 83%. The City of New York is making the case that the revised maps produce an unnecessary financial burden on too many property owners. NYC’s appeal was filed last November and prepared by the Dutch engineering firm Arcadis.

The City of Hoboken took the opposite tack from the City of New York. In 2014, after Superstorm Sandy, the City of Hoboken amended its flood ordinance. Instead of challenging the greatly expanded flood maps, Hoboken adopted an earlier revision of the FEMA maps thus forcing developers to build above a yet higher flood elevation. By adopting these maps that now put over 75% of Hoboken in a flood hazard zone, the City has also forced more builders to be subjected to these new requirements. A number of developers have protested, saying that this ordinance is creating an unnecessary burden for them. 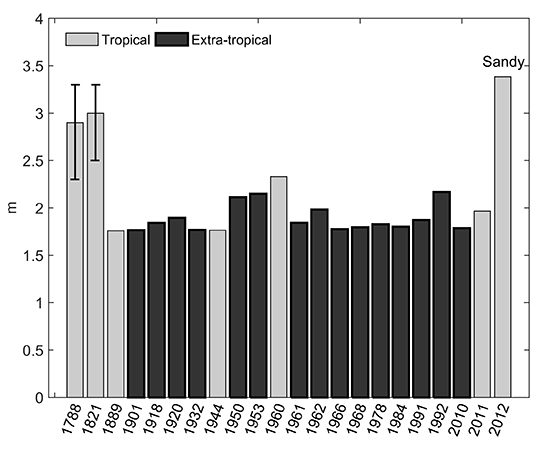 Major storms of the past in the New York Harbor measured in meters from 1788 to 2012. Source: A Validated Tropical-Extratropical Flood Hazard Assessment for New York Harbor by Dr. Philip Orton et al.

Engineers and public officials comprising the Hudson River Rebuild by Design project are calling Superstorm Sandy a 100 year storm surge event. Based on this conclusion and a directive from the federal government, the first priority of Rebuild by Design has been to erect a massive “resist” infrastructure — a series of floodwalls and revetments — to protect the Hoboken area from another surge comparable to Sandy. Engineers working on the project estimate the total hard and soft costs for building this “resist” infrastructure to be between $230 and $275 million. The federal grant provided for this project is for $230 million. The infrastructure is said to have a life of 100 years assuming that about $2 million in annual maintenance can be provided.

Does the probability of another Superstorm Sandy justify this expense for just one part of what was originally designed as a comprehensive approach? What if these funds were to be expended instead on all the other flood mitigation measures? The “resist” floodwalls, of course, will be of no use in protecting the Hoboken area from the regular flooding that occurs during heavy rainstorms.

The City of Hoboken has been undertaking a number of other strategies to provide flood protection. But the excessive cost for the “resist” walls are likely to result in these other strategies being underfunded and the ultimate financial burden on the city could be unsustainable.