Although data from super-storm Sandy was not factored into FEMA’s new maps, they appear to conform closely to the extent of flooding that occurred three months ago. These maps replace the old ones created 25 years ago and are available online. (See link below.)

Remarkably, the new maps do not reflect Hoboken’s experience during Sandy. Nor do they account for the dual threats posed by rising sea levels and the increased likelihood of extreme weather events. Nevertheless, the new FEMA maps alone point to an ominous future for Hoboken. Some businesses in the low-lying areas of Hoboken will not be returning to their ground floor storefronts. One First Street storeowner lost $100,000 worth of inventory and his insurance will only cover a small portion of this loss. The owner says he is leaving Hoboken. Some retail stores and restaurants have bounced back quickly, having made a substantial investment to restore their places of business. But what will happen if they are flooded again and again by future storms?

Residential owners are also suffering serious losses as they replace boilers and electrical systems. The National Flood Insurance Program has been telling property owners who were flooded during Sandy that their ground floor units are “basements” and thus not covered by their flood insurance. The new maps substantially raise the elevation requirements for new construction. For building sites in the new “high hazard zone” along Hoboken’s Hudson River coastline, new construction must be able to withstand the impact of waves in excess of three feet. This new standard would apply to the proposed Monarch Towers project at the Shipyard development, and to the Union Dry Dock and Stevens Institute’s waterfront sites that were at one time slated for private development.

The future development and growth of Hoboken will be profoundly impacted. The future cost of flood insurance could be prohibitive to many.

On January 24, Governor Christie announced that the State of New Jersey will be adopting the flood elevation maps just released by FEMA. These maps are known as the Advisory Base Flood Elevation maps or “ABFEs”. While these maps are advisory in nature and do not reflect flood insurance requirements under the National Flood Insurance Program, they serve as the best available data for ongoing reconstruction efforts.

The ABFEs significantly improve upon the existing base flood elevation maps, established over 25 years ago, which are currently used for insurance purposes. In most cases, the ABFEs reflect a higher flood elevation. According to the advisory maps, a significant part of Hoboken –an estimated 79% of the city’s total area– is at risk of flooding. A closer examination reveals that virtually the entire city, save an eastern portion, falls within the flood zones. This ‘island effect’ mirrors the topographical features of Hoboken’s natural landscape, where the highest elevations are found at Castle Point, the home of Stevens Institute of Technology and along Hudson, Washington, Bloomfield Streets and several adjoining areas.

In order to better understand the ABFE definitions, first we need to define the risk probabilities associated with these flood hazard areas: An “Advisory 1%” is an area where there is a one-percent-annual-chance of a flood equal to or exceeding the base flood elevation. Similarly, an “Advisory 0.2%” is an area designated as having a 0.2%-annual-chance of a flooding event equal to or exceeding the base elevation. Typically, the Advisory 1% is used for building codes and insurance purposes. 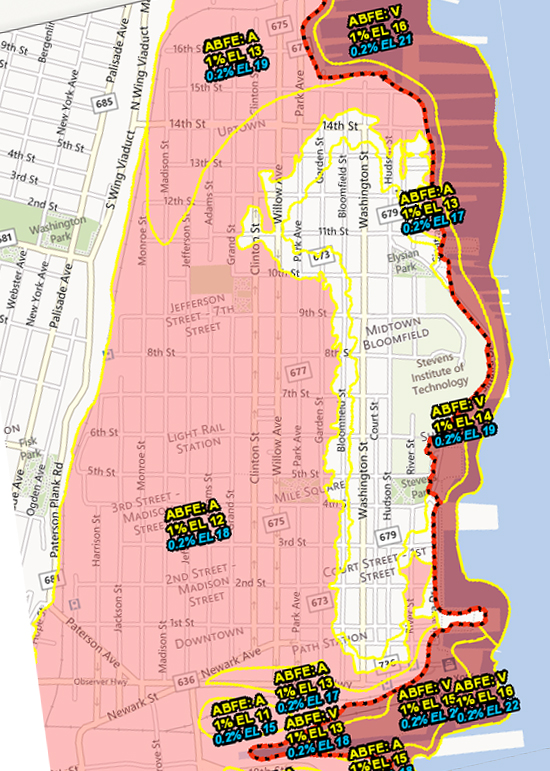 It is important to note that, although the ABFEs were issued following Hurricane Sandy, they do not make use of data received from Sandy’s impact nor do they consider future anticipated sea level rise. FEMA is quick to note that these new maps are “conservative” and based on “sound science and engineering”. FEMA has furthermore suggested that the ABFEs will be almost identical to the final Federal Insurance Rate Maps that are used to determine insurance requirements.

The Fund for a Better Waterfront (FBW) will be examining additional maps to determine where the floodwaters breached during superstorm Sandy. After a careful analysis and in consultation with professional engineers and other experts, FBW will help develop a comprehensive plan to mitigate the impact of future flood events. FBW has been paying close attention to the Netherlands, New Orleans and other communities that have grappled with these problems. The Netherlands, most of which is below sea level, has had 600 years of experience. They invest the bulk of their resources into preventive measures, rather than simply doling out relief money.