New York City’s flood hazard maps found to be inaccurate; so what about Hoboken?

New York City’s flood hazard maps found to be inaccurate; so what about Hoboken?


Joan Golizio, age 81, lives at 625 Garden Street in Hoboken. She has lived on that block since 1957, nearly 60 years. She says the neighborhood has never flooded. When Superstorm Sandy hit in October 2012, the street at the 600 block of Garden was dry. Ms. Golizio’s basement also remained dry.

Her next door neighbors, Aaron Lewit and Lynne Shapiro experienced minor flooding during Sandy. The ground became saturated with water which seeped into their basement to a depth of several inches. The damage they suffered was minimal.

The Federal Emergency Management Agency (FEMA) revised flood maps, which are now preliminary, will go into effect in several years. That will put most of the 600 Garden Street block squarely within FEMA’s flood hazard zone. About 80 percent of Hoboken will be on these expanded flood maps. Any mortgaged properties in these zones will be required to carry flood insurance.

By 2014, the National Flood Insurance Program had incurred $24 billion in debt as a result of Hurricanes Katrina, Rita and Sandy. Flood insurance rates have been climbing steadily. If the federal government ends subsidies to the National Flood Insurance Program, as they have been threatening to do, rates could skyrocket. For homeowners already saddled with mortgages, high taxes and other costs, their homes may no longer be affordable.

FEMA’s flood zone boundaries are for a 100-year storm meaning that there is a one percent chance of experiencing a flood in a given year. The new boundaries are based on a coastal flood study conducted by FEMA Region II for portions of coastal New York and New Jersey. Several years earlier, FEMA set advisory standards for the new maps for the first time since 1983.

This past year, the City of New York successfully challenged its flood hazard maps contending that FEMA’s analysis contained significant technical and scientific errors, overstating the Base Flood Elevations by more than two feet in many areas of the City and unnecessarily expanding the flood hazard area by 35 percent. On October 17, 2016, New York City Mayor Bill de Blasio and FEMA announced an agreement to revise New York City’s flood hazard maps, dramatically reducing the number of people and properties in FEMA’s flood zone. Following the agreement, Mayor de Blasio stated, “Our City needs precise flood maps that reflect real risks, both today and years from now–and we have to do that fairly.”

The FEMA flood maps are supposed to represent a 100-year floodplain. Yet, a January 2016 study conducted by Dr. Philip Orton and Dr. Alan Blumberg from Stevens Institute of Technology and four other scientists entitled A Validated Tropical-Extratropical Flood Hazard Assessment for New York Harbor concluded that Sandy was a 260-year storm. The study was based on an analysis of past storms dating back to the 1700s. According to the study, the last storm surge comparable to Sandy occurred prior to the year 1700. 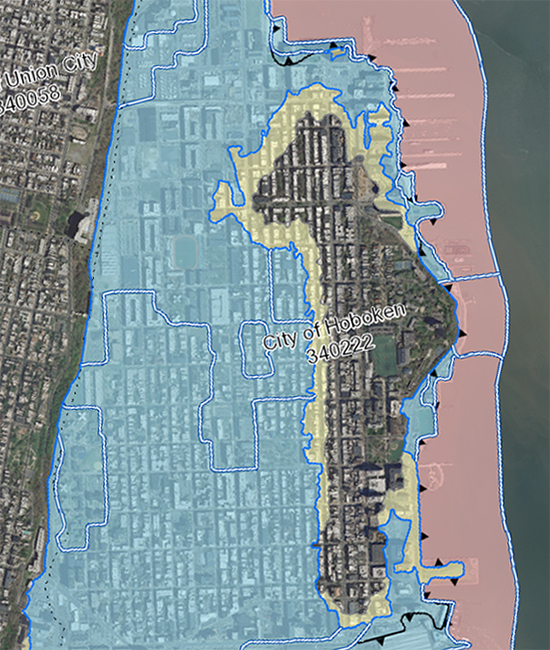 FEMA’s Preliminary Flood Insurance Rate Map puts about 80% of Hoboken in a flood hazard zone. These maps will go into effect in the next several years.

In preparing the scientific and technical analyses for the appeal, the City of New York relied on the expertise of the Dutch engineering firm ARCADIS and additional experts from the consulting firm ATCS and the University of North Florida. According to the appeal document, FEMA’s mapping unnecessarily put about 26,000 buildings and 170,000 residents in the flood hazard zone.

For the Hoboken area, the flood prevention efforts have focused primarily on building a series of floodwalls and revetments to protect against future surges similar to Superstorm Sandy. A $230 million HUD grant, under the Rebuild by Design program, may fall short in paying for the total cost of these “resist” structures. The height of the floodwalls will be designed to protect against a 100-year storm as determined by the FEMA Base Flood Elevations of 2015 done concurrently with New York City’s.