The renowned, award-winning Dutch architect Rem Koolhaas founded OMA (The Office for Metropolitan Architecture) with three other architects in 1975. Projects designed by OMA currently being built include three in China: the Taipei Performing Arts Centre, the Television Cultural Centre in Beijing and Shenzhen Stock Exchange; three in Doha, Qatar; and one in the Netherlands, De Rotterdam. In 2006, Koolhaas designed a skyscraper for Jersey City’s waterfront, an approved 52-story structure to be built in the Powerhouse Arts District. This tower, not yet built, is comprised of four rectangular sections stacked perpendicular to each other. In 1999, AMO, an interdisciplinary research, branding and publication studio based in Rotterdam was created to complement the architectural work of the practice.

OMA teamed up with a Dutch engineering firm, Royal HaskoningDHV; a New York City-based urban design and landscape architecture firm, Balmori Associates; a real estate and economic development consulting firm, HR&A plus the branding and design consultants, 2×4 to submit an application to HUD’s Rebuild by Design competition. On August 9, 2013, the federal Hurricane Sandy Rebuilding Task Force selected the OMA team as one of the ten finalists.

Each of the winning teams picked one of four categories: coastal communities, high density urban environments, ecological and water body networks or a catch-all category of unexpected focus. Since August 9, each of the teams has engaged in an intensive, collaborative process of research, analysis and meetings with local residents and public officials in the Sandy-impacted areas of New York, New Jersey, Maryland, Rhode Island and Connecticut. Each team produced four to five design proposals that were unveiled on October 28 in New York City and Newark, New Jersey. Today, HUD has announced the one schematic design project that will be fully developed by each team in partnership with local stakeholders.

The OMA team’s design, selected by the jury, is entitled Resist, Delay, Store, Discharge: a comprehensive strategy for Hoboken. Superstorm Sandy flooded 75 percent of Hoboken which became the poster-child for Sandy flooding in densely populated urban communities. The OMA team describes its approach as follows: “Our comprehensive strategy deploys both hard infrastructure and soft landscape for coastal defense (resist); recommends policies to enable the urban fabric to slow down water (delay); a green circuit to trap water (store) and water pumps to support drainage (discharge).”

The team’s initial proposals for Hoboken are on the Rebuild by Design website (see link below). Hoboken’s highly impervious surfaces, clay ground and inadequate drainage make the city susceptible to flash flooding. They propose a green circuit on the Jersey City-Hoboken border to the south and west along the base of the Palisades up to a naturally landscaped Weehawken Cove to facilitate drainage combined with rainwater storage units and water pumps. The design also includes a coastal line of defense that utilizes parks and buildings as defensive elements.

While all of the Rebuild by Design teams promote high-minded ideas and HUD stresses the need for innovation, Hoboken needs to attend to some basic remedies in order to alleviate the annual flooding that occurs in low-lying areas. The antequated combined sewer system, portions of which are still comprised of the original redwood sewer lines, is at the heart of the problem. The pumps, green infrastructure and rainwater retention systems are common sense solutions but need to be combined with a sewer system that works. New large scale development projects should provide an opportunity to begin the separation of stormwater from sewerage lines. 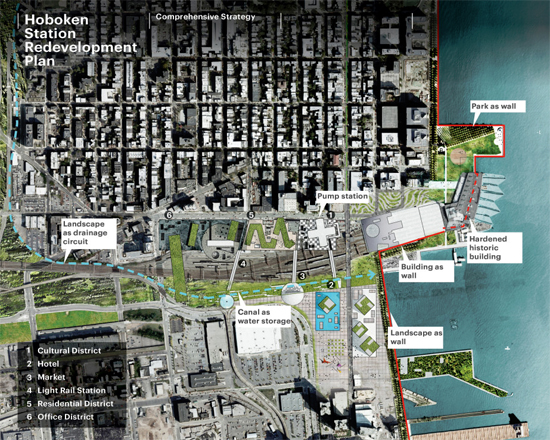 During Sandy, floodwaters breached Hoboken’s southern and northern boundaries but was protected along most of its coastline by the highest elevations in the city at Castle Point and along Hudson and Washington Streets. The surge came into Jersey City and Hoboken unimpeded along the Long Slip Canal and at the Weehawken Cove, filling Hoboken like a bathtub all the way to the base of the Palisades at its western border. The tidal waters began to recede within a matter of hours, but the floodwater in Hoboken had no means of egress and remained for days.

During Sandy, Hoboken was fortunate in that it suffered little structural damage to its buildings. The flooding, of course, damaged sheet rock, destroyed boilers and what was stored in basements and required millions of dollars in repairs, but the total destruction of homes along the shorelines in FEMA’s Coastal High Hazard Aone was not what occurred in Hoboken. Nearly all of the flooding occurred in the “A” zone away from the destructive force of powerful waves. The damage along the coastline was confined mostly to several of the waterfront parks. New residential and commercial development at the waterfront was spared due to the fact that they were built to a suitable elevation and appropriately set back behind the waterfront park and street.

A full description of the ten projects selected for the current phase of Rebuild by Design is provided on the rebuildbydesign.org website.

For the final stage in March 2014, a jury will select the winning projects for implementation. HUD will provide Community Development Block Grant Disaster Recovery funding to ensure that these schematic designs are then built. Design solutions are expected to range in scope and scale — from large-scale urban and multi-functional green infrastructure, to small-scale distributed flood protection measures and resilient residential structures.