On July 20, 2016, auditors from the office of the New York City Comptroller arrived at 101 Barclay Street in Manhattan to perform an inspection of the ground floor public space. The Department of City Planning granted the owner additional height and density in exchange for an agreement to provide a public lobby.

Building security officials stopped the auditors from taking photographs and told them they were prohibited from making further entry into the building’s lobby. Building security informed the auditors that this lobby has been closed to the public for at least 15 years. A prominent sign on the door stated that the lobby is only open to Bank of New York staff and invited guests. 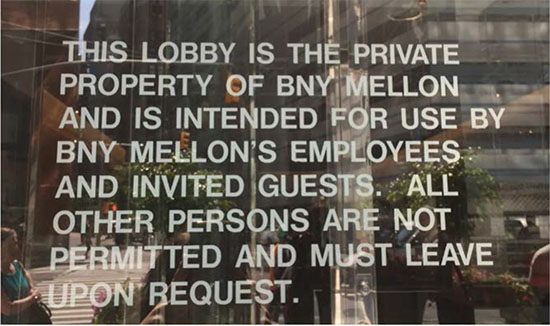 Sign at lobby entrance to 101 Barclay Street in Manhattan where owner was granted zoning bonus in exchange for agreement to provide public space at lobby level.

Auditors also inspected 175 East 96th Street in Manhattan where the property owner built an additional 68,157 square feet in floor area in exchange for an agreement to create a public plaza. A sign at the plaza’s entrance reads “Members Only.” A large wooden fence obstructed public access in one area. Cable fence barriers impeded numerous other entry points.

On April 18, 2017, New York City Comptroller Scott Stringer released Audit Report on the City’s Oversight over Privately Owned Public Spaces (POPS). Stringer’s office inspected all 333 POPS locations in New York City and found 182, more than half, failed to live up to their agreements. In some cases the promised amenities simply did not exist; in others, they were non-functioning. Often restaurants expanded their seating areas usurping or blocking entry to promised public areas.

The report states: “Currently property owners are benefiting financially from approximately 23 million square feet of additional (bonus) floor area in their buildings in exchange for providing POPS at 333 locations in New York City.”

President Donald J. Trump’s lobby in Trump Tower made the list of non-complying POPS. The City of New York allowed Trump Tower a bonus height of 20 stories in exchange for public open space that was to be provided in the lobby. The Comptroller’s audit found that many of the tables that were required as part of the agreement were not provided. Previously, kiosks selling merchandise occupied the public space where seating should have been. The City levied $14,000 in fines and after a year, the benches were finally reinstalled.

The problem of providing “public” space on private property has been well documented over the years. In 2000, Mr. Jerold S. Kayden, a professor of urban planning and design at Harvard, conducted a study with the NYC Department of City Planning and the Municipal Art Society. In his October 2011 op-ed piece in the New York Times, Kayden writes that his study found 40 percent of the 500 public plazas, arcades and indoor spaces “were and are practically useless, with austere designs, no amenities and little or no direct sunlight. Roughly half of the buildings surveyed had spaces that were illegally closed or otherwise privatized.”

The Comptroller’s report makes clear that enforcing the numerous zoning bonus agreements that had been adopted since these provisions were first enacted in 1961 is a logistical nightmare. The Department of Buildings (DOB) enforces the City’s Building Code and Zoning resolutions and is responsible for over a million buildings in New York City. The DOB says that it investigates all complaints, including POPS-related ones. But many of these non-compliant POPS are not recognized by people as being public, and thus do not generate complaints.

The Comptroller’s report found the DOB had failed to inspect 83% of the POPS for compliance for at least four years. Of the locations inspected by the DOB over the last four years, the Comptroller’s office found that only 18 violations were issued to ten POPS sites. The Comptroller submitted a list of recommendations to the DOB. The DOB agreed with some but pushed back on others, such as being proactive in its inspections of POPS rather than simply responding to complaints.

What do Zuccotti Park and Hudson River Walkway have in common?
Will Hoboken Shipyard’s Pier 13 bring bad luck for public access?
With demise of Google’s plan, Toronto has opportunity to create a truly public lakefront
Liberty Harbor North based on tenets of new urbanism
The urban design principles that make for successful waterfronts
Hoboken’s original plan and first parks established in 1804
Architect Craig Whitaker’s reflections on what makes waterfronts successful