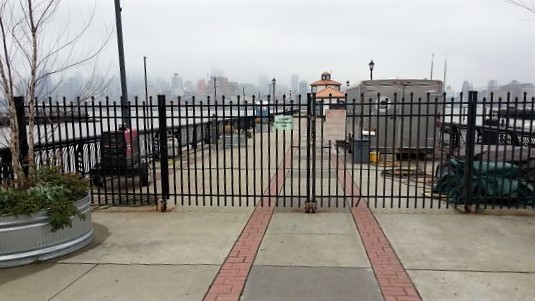 Gated entrance to Shipyard’s Pier 13 sends message to public that this is “private property.”

In 1820, a New Jersey man was collecting oysters along the shores when he was challenged as a trespasser by the upland property owner. The dispute reached the New Jersey Supreme Court, where a justice expressed surprise that the taking of: “a few bushels of oysters should involve in it questions, so momentous in their nature, as well as in their magnitude; …affecting the rights of all our citizens, and embracing …the laws of Nations and of England, the relative rights of sovereign and subjects, as well as the municipal regulations of our own country.” — Putting the Public Trust Doctrine to Work, Coastal States Organization

This New Jersey Supreme Court decision nearly 200 years ago became a landmark case preserving the right of public access to waters that are protected by the Public Trust Doctrine. The issue resurfaced last night as the Hoboken Planning Board considered an application by the Shipyard Associates to operate Pier 13 as a beer garden. The applicant repeatedly asserted that the pier is his private property, a claim the Board appeared to accept. However, the pier extends over the Hudson River, a body of water that is held in trust by the state for the benefit of the public.

In fact, nearly the entire Shipyard development site – comprising 1160 units of housing – is built on what is defined by the State of New Jersey’s Coastal Zone Management Regulations as the “filled-water’s edge” — an area that was formerly flowed by the tides and thus vested with a public title to the land. The state granted private titles to these lands that run concurrently with the state’s public title so that ship builders, ocean liners and other waterfront industries could operate at the coastline. These water-dependent uses are protected by the courts as benefiting the public based on the age-old Public Trust Doctrine.

In the 1970s, as waterfront industries disappeared along the Hudson River, the state of New Jersey struggled with how to deal with the coastline as private residential and commercial developers purchased the land and piers seeking to convert to non-water-dependent uses. The result were amendments to the Coastal Zone Management Regulations (N.J.A.C. 7:7E) allowing private developers to build on these Public Trust Lands in exchange for building their portion of the Hudson River Waterfront Walkway. This 30-foot wide walkway extending 18.5 miles from the Bayonne Bridge to the George Washington Bridge is now largely built and is required by the state to be accessible 24 hours a day, 7 days a week.

A central issue that confronted the Hoboken Planning Board is how do you provide public access to a pier that is primarily controlled by a private developer. The impending regulatory nightmare became apparent as the Board went late into the evening grappling with a long list of conditions for approval concerning hours of operation, noise, limits on occupancy, set up for food trucks, etc. A final vote was put on hold until the Board’s May 22 meeting. Typically, as Board resolutions are filed away and time passes, they become increasingly difficult to enforce.

When a project is developed at the Hudson River Waterfront, the New Jersey Department of Environmental Protection (NJDEP) will grant a waterfront permit that stipulates the terms for phasing in the Waterfront Walkway as the private development proceeds. The state has very specific requirements for perpendicular access along the piers and the granting of easements to the NJDEP. Yet, the Shipyard developer claimed last night that the NJDEP granted a waterfront permit for this site that required no public easements and no provisions for the walkway to extend over the pier.

At the Shelter Bay Club, a private residential gated community in Edgewater, New Jersey, the condo association chose to fence off the “public” Hudson River Waterfront Walkway when they felt it posed a security issue for their homes. The NJDEP spent five years in litigation before the property owners were finally forced by the Court to remove the fence and open the walkway to the public.

Adopted in 1961, New York City’s incentive zoning regulations offered developers the bonus of bigger buildings in return for providing accessible open space. Many projects built under these regulations illustrate the problems inherent in trying to create “public” space on private land. On some sites, for example, owners later removed benches and erected barriers to deter the public from using the space. I.B.M. has been credited with creating a signature “public” plaza at its headquarters on Madison Avenue in Manhattan. However, after being sold to a new owner, many of the public amenities disappeared. The history of the I.B.M. plaza illustrates a city’s limited ability to enforce deals negotiated in years past, often with different owners.

The nature of the water’s edge at Shipyard’s Pier 13 stands in contrast to much of the Hoboken waterfront that has become public parkland: Pier A, the promenade at the South Waterfront, Sinatra Park, Castle Point Park and Maxwell Place Park all of which are open and accessible to the public 24 hours a day and are unquestionably public spaces. Unlike Pier 13, there exists no membership requirement nor any obligation to purchase food or drink. The gated entrance to Pier 13 serves as a reminder that it is “private property.”

The Public Trust Doctrine
Public vs. Private
Privatizing the Planning Process
What do Zucotti Park and Hudson River Walkway have in common?
Meet Me at the Plaza by Jerold Kayden
Shipyard’s plan to privatize pier