Walking the public walk along the dramatically transformed Bayonne waterfront

It was hard to believe this was Bayonne, N.J.

Standing on the waterfront looking at the undulating green hills and flowing grasses of what Sports Illustrated calls “the most audacious golf course in the world,” I could have sworn I was in Ireland or Scotland. Maybe rural Connecticut.

But this was indeed Bayonne. On a recent Sunday in April, I joined The Hudson River Waterfront Conservancy (HRWC) for a beautiful walk along the waterfront walkway at the Bayonne Golf Club. This walk was part of a series the not-for-profit HRWC leads every year as part of their mission to monitor the construction and maintenance of the Hudson River Waterfront Walkway. Led by HRWC Board President Don Stitzenberg , the tour highlighted both the good and the bad of the current walkway along this stretch of Bayonne’s waterfront, illustrating the many issues that arise when public and private interests intersect.

The good? Well, for starters the Bayonne Golf Club is built on a closed landfill, a $130 million, 10-year project that transformed a former garbage dump for harbor sludge into green hills and dunes that so faithfully reproduce the Scottish countryside golfers must walk (no golf carts allowed) to tour the rugged course. The golf club is edged by a partially-complete waterfront walkway that allows members of the public viewing access to the generous vistas of the par-71 green as well as of New York City and the New York Harbor. The developer spent considerable funds building a well-constructed bridge that spans a section of the coastline, not only protecting the recovering fish spawning grounds and nesting areas of the many migratory birds that find refuge there, but also providing a non-intrusive viewing area for avid bird-watchers and other members of the public.

But the contrasts are telling. As I walked east across the bridge I saw the member-only golf clubhouse (reportedly brought over piece by piece from Scotland) and green in front of me, a white heron on the shore below and to my left the relics of Bayonne’s former industrial life. Across the inlet from the golf club, the MOTBY (Marine Ocean Terminal Bayonne) pier looms behind portions of the newly installed public waterfront walkway. It is an enormous former military pier, acres of abandoned military warehouses, boarded up and sectioned off with barbed-wire, that the City of Bayonne bought from the US Navy for $1 and plans to develop.

Container cranes from the neighboring shipping terminal pirouette in the distance, and along with the Cape Liberty Cruise Port, are a reminder of the vast international commerce that still courses through Bayonne’s working waterfront. Across the 32nd Street overpass, the working class city of Bayonne maintains a median income of approximately $54,000 and a poverty rate of nearly 15%.

So as we continued along the walkway towards the golf club, I recognized that this is difficult terrain for the Public Trust Doctrine, the 400-year old legal principle that protects the river and the water’s edge for the public’s use and a founding tenet of the Hudson River Waterfront Walkway. Private developers are mandated by the State of New Jersey to build, maintain and provide public access to the walkway along their property. Compliance is a persistent problem facing not only the Hudson River Waterfront Walkway, but also other privately owned spaces where developers agree to provide public access in exchange for additional development rights. These are, by agreement, public spaces. However, in New York City, for example, the rate of compliance is a dismal 50%. While many developers find themselves in violation of this law, they continue to reap the financial rewards.

And so it is in Bayonne, where The Bayonne Golf Course has not completed the final portion of the walkway that should run along the water’s edge on their property, a violation that was the subject of a suit by the NJDEP. The parties reached a settlement that allows the golf club to build the final section of the required walkway only when the adjacent property is redeveloped. Additionally, the settlement allows the club to keep the private floating dock they use when ferrying in members in from Manhattan, a feature also built in violation of walkway regulations. HRWC opposes the settlement, noting that the neighboring property contains a large number of working gas tanks, and it may be many years before that property is redeveloped, thus leaving the Bayonne Golf Club’s last segment of the public walkway unfinished and inaccessible to the public for the foreseeable future. Meanwhile, the golf club uses the waterfront for their driving range, heliport, and garbage dump and pedestrians enjoying a stroll face a frequently closed gate and a “private property” sign.

However, on that sunny Sunday in late April, we found the gate open, and as the HRWC has done every year since the settlement, we walked past the sign and in silent protest strolled onto the dirt and gravel walkway that hugs the shore of the golf club. While in past years the club dispatched security to stop the tour, this year we were left alone to walk between the rolling green hills of the golf club and the sandy beach below.

About ¾ mile from the beginning of the walkway, Don Stitzenberg addressed another common problem found along the walkway, where developers may follow the letter, but not the spirit, of the walkway regulations. The group stopped to look at a sign announcing a fishing pier and kayak launch – both features required by law – but saw only a peninsula of rocks leading down to a garbage can. The site illustrates how developers frequently discourage public access: there is no fishing pier and the “launch” is too far from the entrance to realistically carry a kayak there, or launch from such a rocky shoreline. 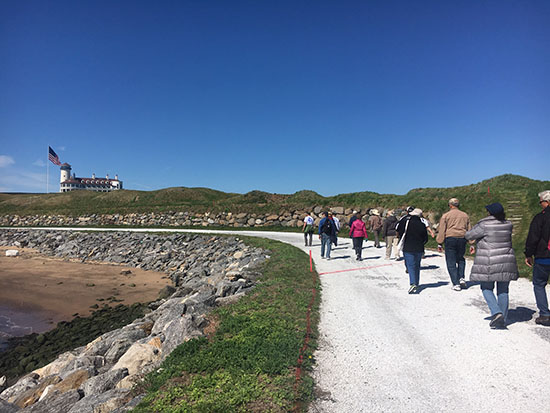 Touring the contested portion of the walkway with the Hudson River Waterfront Conservancy along the Scottish links-style Bayonne Golf Club built over a former garbage dump. 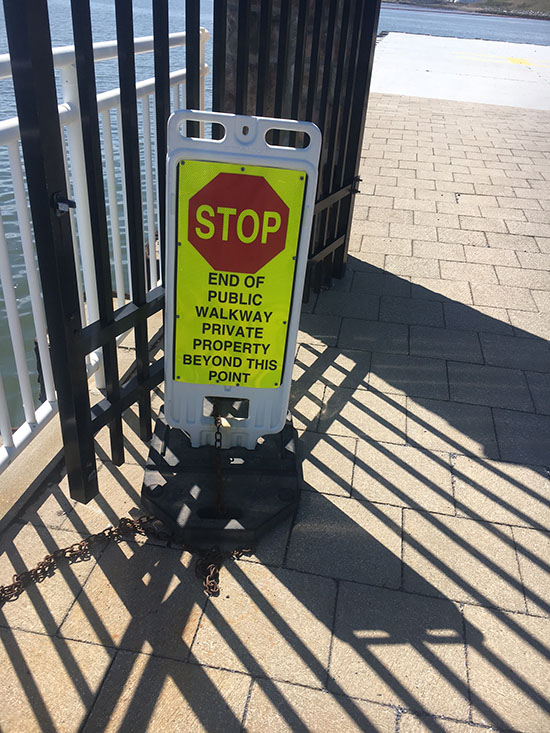 The Hudson River Waterfront Walkway ends prematurely at the Bayonne Golf Club where people using the public walk are met with a fence and sign reading “private property beyond this point.”

Maintenance is also a familiar sticking point, not just in Bayonne but all along the Hudson River Walkway. While some segments are well constructed with cement pavers supported by solid sheet piling construction and can withstand the often harsh elements found along the waterfront, others, built with the less expensive black top and rip rap, degrade quickly. Since individual developers are tasked with maintaining their segment of the public walkway, there is little continuity in terms of quality and condition, making enforcement a challenge for the NJDEP.

FBW understood from the beginning, based on sage advice from its architect and urban planner Craig Whitaker, that creating “public” space on private land would be problematic. The solution was simple. Instead of settling for the 30-foot public walk required by the state, make it a continuous, waterfront park, clearly delineated from the upland private development by an extended public street system. In Hoboken, where much of the waterfront park has been built, no one would question your right to be there.

The next Hudson River Waterfront Conservancy walk is Sunday, May 7th, when they will explore the walkway along the southern end of Liberty State Park, the Liberty National Golf Club and Port Liberte. See www.hudsonriverwaterfront.org for more details and a full schedule of walks.

Half of NYC owners fail to live up to public space agreements
What do Zuccotti Park and Hudson River Waterfront Walkway have in common?
Jane Jacobs helps explain what makes a better waterfront
William H. Whyte on what makes public spaces fail and what makes them succeed
Plan for the Hoboken Waterfront