When Hoboken Mayor Dawn Zimmer came into office in 2009, she promised to be a strong advocate for creating public open space. Yet, after five years in office, her administration has made little progress. The southwest parks plan will yield less than an acre once the court rules on a price for that parcel condemned by the City. The administration’s negotiations to acquire the former industrial site in northwest Hoboken has dragged on for years without resolution. As the population of Hoboken continues to grow and attracts many families with children of all ages, the need for new open, public spaces is more pressing than ever.

On September 15, the City of Hoboken unveiled its alternate proposals for the central waterfront from Fourth to Eleventh Streets. This project, titled Frank Sinatra Drive Visioning and Concept Plan Design, fails to even mention opportunities to create over six acres of new parkland east of Sinatra Drive at the water’s edge. Two key sites could provide the final connections for Hoboken’s waterfront park, thus making it continuous from the Hoboken Train Terminal to the Weehawken border.

The success of Hoboken’s waterfront to date can be measured by the fact that we have created an unquestionably public space — that is, a public park — along the water’s edge, available to people from all walks of life, for generations to come. This is in stark contrast to other municipalities along the Hudson River waterfront that have accepted the 30-foot state mandated walkway as the standard. To the north, this walkway often abuts private enclaves and in Jersey City it runs adjacent to high rise towers, with no clear separation between the public and private spaces.

For decades, FBW has proposed the concept of a continuous public park at the water’s edge. In Hoboken, most of this park has been built, including Pier A Park, Pier C Park, the promenade from Newark to Fourth Streets, Sinatra Park, Castle Point Park and Maxwell Place Park. These new pubilc spaces have more than doubled the amount of Hoboken’s parkland.

The public input provided for the Sinatra Drive project overwhelmingly favors more open space similar to the stellar model provided at the South Waterfront. The good news is that Hoboken’s past success financing and developing the waterfront parks should provide the inspiration to complete the goal of a continuous, public waterfront park. This will require some complex negotiations and long-term planning, but it is certainly doable.

Earlier this year, the mayor cut the ribbon for the newly rebuilt walkway and soccer field at Sinatra Park. This portion of the walkway includes a mere dozen small, ornamental trees that will provide no shade during the heat of summer. (This walkway connects to another segment of the waterfront walkway to the north on Stevens Institute property supported on piles over the Hudson River that is completely barren of any vegetation.)

The City of Hoboken is now poised to further extend this bleak landscape plan in its current redesign for Sinatra Drive. The September 15 presentation showed a paltry 18 trees along “The Point” (north of the Stevens Institute waterfront parking lot and south of Union Dry Dock).

The City’s recent and current plans stand in stark contrast to the hundreds of trees at Hoboken’s South Waterfront. Most are London Plane trees that form a lush canopy over the waterfront promenade, the bike path and Sinatra Drive. 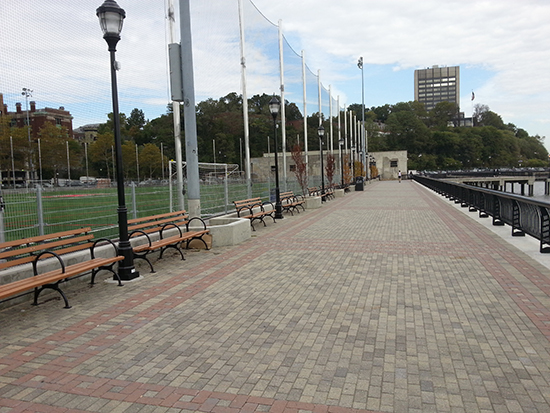 The City of Hoboken created a bleak landscape plan for the newly reopened Sinatra Park along the Hudson River waterfront. 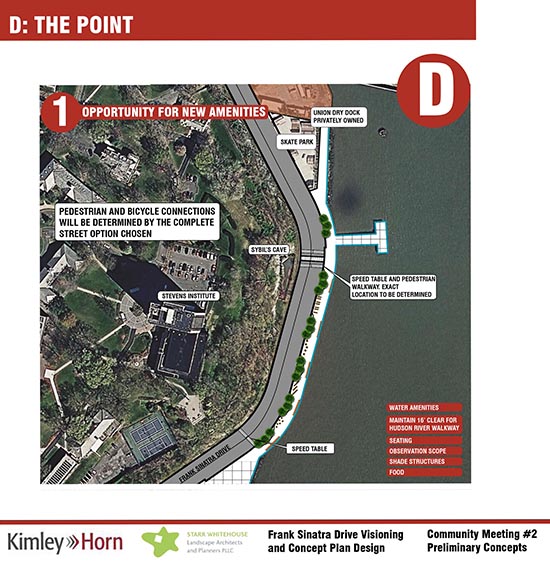 A mere 18 trees is shown in the City’s plan for Sinatra Drive at Castle Point.,