On September 15, the City of Hoboken and its consultants unveiled plans for the redesign of Sinatra Drive at the central waterfront from 4th to 11th Streets. These plans fall woefully short of the high standards set at Hoboken’s South Waterfront. The beautifully landscaped Pier A Park has won awards from the American Society of Landscape Architects and the Waterfront Center. Last year, the New Jersey Chapter of the American Planning Association designated Hoboken’s South Waterfront as one of its 2013 Great Public Places in New Jersey, citing it as a testament to “forward-thinking planning.”

The City’s plans for the central waterfront, are best described as short sighted, in great part because the administration has been moving forward and making decisions unilaterally without speaking to the key stakeholders; unlawfully usurping a significant portion of Stevens Park for a roadway; ignoring previously mapped street rights-of-way for 4th and 5th Streets; failing to develop a funding strategy; and failing to include a logical strategy for securing additional parkland.

For the last 24 years, the Fund for a Better Waterfront (FBW) has relied on the best thinking available regarding planning and urban design, founded on the principle that the water’s edge belongs to the public. Unfortunately, the persistent advocacy of these ideas and principles has had little effect on the current administration. The following highlights the most glaring shortfalls:

Illegal intrusion of road into dedicated public park Stevens Park, first established by Col. John Stevens’ 1804 map for the City of Hoboken and then called Hudson Square, is not mentioned in the consultant’s current Existing Conditions Report for this project. The boundaries for this park were well established by 1889. Yet, the City’s proposal to keep the current convoluted road pattern usurps a significant portion of this public park as provided by the Stevens family to the City of Hoboken. FBW’s attorney has determined that the City’s proposal is unlawful.

Mapped street rights-of-way ignored Fourth and Fifth Streets were mapped as public rights-of-way in the 1800s running in a straight line from Hoboken’s western border to the Hudson River. By ending both streets in “T” intersections with Sinatra Drive makes them conform to the National Association of City Transportation Officials “complete streets” standards providing for typical Hoboken intersections that would serve to slow vehicular traffic, helping to make the waterfront safer and more pedestrian and bicycle-friendly. Only one of the three alternatives presented for Fifth Street reflects what was mapped originally.

Park Plan falls short The plan calls for new open space on Stevens Institute property west (upland) of Sinatra Drive which is private land. No discussions took place between the City and Stevens concerning this unrealistic proposal. There is a potential to add up to six acres of additional public parkland at various points along the central waterfront on the river-side of Sinatra Drive. No such provisions were included in the City’s plans.

Funding strategy not included Essential to the project’s ultimate success is to have a plan for securing the grants required to build the project. The City’s consultants routinely do this for other clients and know what is required to get in line for federal transportation funds that are the largest pot of money available for these type of projects. During past administrations, the City of Hoboken and even private developers have been highly successful in securing the tens of millions in funding from state, federal and other sources to develop Hoboken’s waterfront park, streets and other infrastructure. This plan is incomplete without citing potential funding sources. 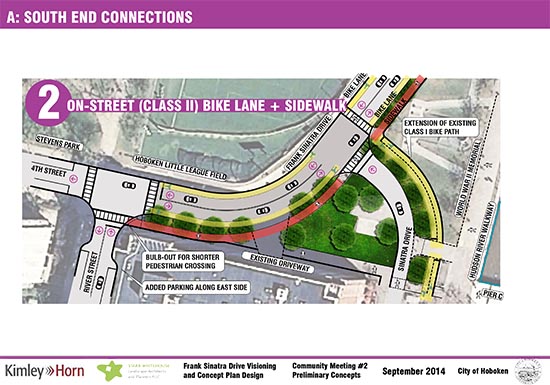 The City’s three options for Fourth Street are all essentially the same. All three unlawfully run a roadway through a portion of Stevens Park provided by the Stevens family to the City of Hoboken.

City has failed to engage with major project stakeholders To make this project successful requires the City to be fully engaged with the property owners (Stevens Institute, Union Dry Dock, Maxwell Place, etc.), Little League parents and coaches, the American Legion, cycling organizations and other public interest groups. The City has ignored the groups that have most at stake along Hoboken’s central waterfront. Much of the input provided by the City’s own online public survey designed to identify key issues for the central waterfront fell on deaf ears.

The solution is straight-forward. Take the exceptional features of the South Waterfront – the public park, generous canopy of trees, lively streetscape, etc. — and extend them throughout the central waterfront. FBW has repeatedly offered to assist with ideas that reflect what would best serve the public and community as a whole, but the City has shown little interest. This project will become an opportunity squandered unless the City changes course.

Make your opinion count. Take the online public opinion survey by clinking on this link: Sinatra Drive Complete Streets Redesign. Please do so today. The deadline is this Friday, October 3. Before taking the survey, you may want to review the consultant’s September 15 presentation and boards (Public Workshop #2). Links to these materials are provided on the same webpage.