In 1990, FBW began to develop its Plan for the Hoboken Waterfront. The first step in the planning process was to extend Hoboken’s traditional street grid to the waterfront. Designating where streets will be located is the fundamental first step of any rational city planning process. It determines the size and shape of the blocks to be privately developed and the boundaries for public parks and squares.

Col. John Stevens owned the land but also had the vision for what Hoboken was to become. In 1804, he hired a surveyor, Charles Loss, who surveyed the land, mapped the streets, designated the blocks and lots, and set aside four public squares, including Hudson Square (renamed Stevens Park in 1955) and Church Square Park. The Charles Loss map was filed with the County Clerk’s office, making it the town’s first official map. The Loss Map of 1804 became a powerful tool, shaping the future development of Hoboken.

The City of Hoboken incorporated and adopted a charter in 1855. Hudson Square and Church Square Park were included in the 1855 Charter and ordinances that followed clearly designated the streets. The numbered east-west streets from First to Fifth ran in a straight line from the City’s western boundary to the Hudson River. As the town grew, City officials employed surveyors and expanded the map, further extending the uniform street grid and adding two uptown parks: Elysian and Columbus. After 1855 and into the early 1900s, the City’s plat map was periodically updated and filed with the County Clerk.

Col. Stevens, the founder and father of Hoboken, was not just an attorney and inventor, he was also a city planner. He required those purchasing his parcels of land to use masonry construction and build to a minimum of three stories. His mapping of Hoboken and his “building design guidelines” have had a lasting legacy on the town and its architecture.

Col. Stevens died in 1838 but in the 100 years that followed, City officials held fast to the plan that he had established. On August 29, 1889, the State of New Jersey Riparian Commissioners provided to the City of Hoboken a tideland grant for the land under water (or formerly under water) in front of Hudson Square. The conveyance was made upon the condition that the City of Hoboken and its successors forever maintain the square and lands fronting on the tide water as an open public square.

At the same time, the City also entered into an agreement with the Hoboken Land & Improvement Company (HLIC) to construct a roadway at the eastern border of Hudson Square that would remain a public street forever. It was later named Shore Road. The mayor at the time, August Grassmann spoke of the importance of this new street, fully accessible to the public, connecting Fourth Street to Fifth Street and a future roadway to the north and keeping Hudson Square intact. The riparian grant and the HLIC agreement both stipulated that no buildings could be erected at Hudson Square or the land on piers to the east that would block views to the Hudson River.

The Hoboken Railroad Warehouse and Steamship Connecting Co., also known as the Hoboken Shore Railroad, was founded in 1895. This short line served a large industrial clientele running the length of Hoboken’s waterfront. In 1910, the company applied to the City of Hoboken for a franchise to extend the railroad south from Fifth Street. The U.S. Government bought the railroad on July 1, 1917 for use by the U.S. Army as the Port of Embarkation at the Hoboken piers from Newark to Fourth Streets. At the onset of World War I, the Government confiscated these piers, owned by two German shipping companies. To move the rail cars to the piers at the south waterfront, the train tracks cut through the southeast corner of Hudson Square.

The railroad operated in a limited fashion in the 1960s and 70s, and filed for abandonment in 1978. On July 28, 1975, the railroad granted an easement to the City of Hoboken for Shore Road (later to become River Road and then renamed Sinatra Drive) north of Fifth Street. In 1976, the City repaved the roadway following the tracks of the Hoboken Shore Railroad, and it became accessible to vehicular traffic. At the time, the City of Hoboken took no action to alter the street pattern or park that had been mapped in this vicinity during the 1800s. As a result, the route of Sinatra Drive between Fourth and Fifth Streets did not follow an existing public right of way for a street. 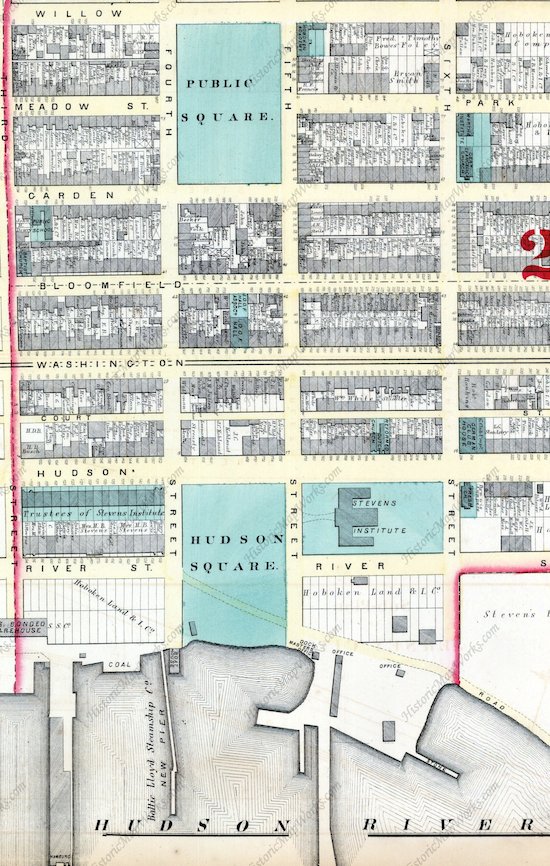 Excerpt from 1873 Hopkins plat map for City of Hoboken showing Hudson Square extending from Hudson Street all the way to the Hudson River.

The City of Hoboken is currently working on a redesign of Sinatra Drive from Fourth Street up to Eleventh Street. Col. Stevens’ plan for the city, the historic record and prior acts of the City provide important precedents that cannot be ignored in the redesign of this waterfront drive.