A once-in-a-century opportunity for Hoboken’s waterfront

A once-in-a-century opportunity for Hoboken’s waterfront

For most of the last century, Hoboken was a bustling port city and maritime industries flourished on its waterfront. But by the 1980s, the ocean liners, merchant marines and ship repairers had nearly all disappeared, leaving an abandoned, derelict waterfront. As a result, Hoboken was provided a once-in-a-century opportunity to transform its riverfront into something spectacular.

In this vein, the City of Hoboken is currently undertaking a project that will transform its central waterfront from Fourth to Eleventh Streets. The project is entitled, Sinatra Drive Visioning and Conceptual Design Plan. If done successfully, Hoboken will have a world class waterfront and a public resource available to all for generations to come. For the mayor and council, it represents an opportunity to establish a lasting legacy: the implementation of a waterfront plan that would make Hoboken a source of civic pride and a model to be emulated.

The quote attributed to the famous architect and urban designer Daniel Burnham, “Make no little plans. They have no magic to stir men’s blood” certainly applies to this project. Making this a project to simply redo Sinatra Drive is to squander a great opportunity. Rather, it should be a plan that takes all of the extraordinary features of Hoboken’s South Waterfront and extends them northward. This includes the expansive public waterfront park with its generous canopy of trees, the pedestrian-friendly street, the bike path and the clear delineation between public and private spaces. The success of the plan for Hoboken’s South Waterfront began with its streets. The east-west streets lead directly to the Hudson River and the waterfront park. Each street terminates with a T-intersection replicating the character of typical Hoboken streets and forcing traffic to slow.

There are several sources of state and federal monies that would pay for the implementation of a grand plan such as this. In fact, the tens of millions in past funding that were used to redevelop Hoboken’s waterfront, required very little municipal tax money or bonding. In order to take this project from “the drawing boards” to actual implementation, the administration should apply for the necessary funds that would cover the cost of a comprehensive plan, including the landscaping and new public open space. Restoring the streets between Fourth and Fifth as originally mapped will produce other benefits to the City. It will provide the additional open space needed to expand Hoboken’s Little League facility and to make the left-field line regulation-size. There is also an opportunity to make much-needed improvements to the World War II memorial. 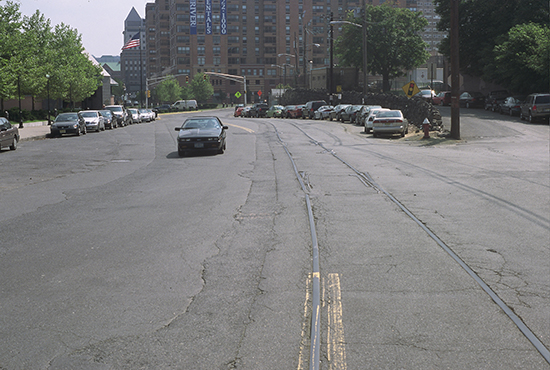 The successful implementation of an exceptional plan for our central waterfront will provide a lasting monument that will be a credit to today’s political leaders and city officials. As the City of Hoboken undertakes this project, we all need to ensure that this is not an opportunity squandered.