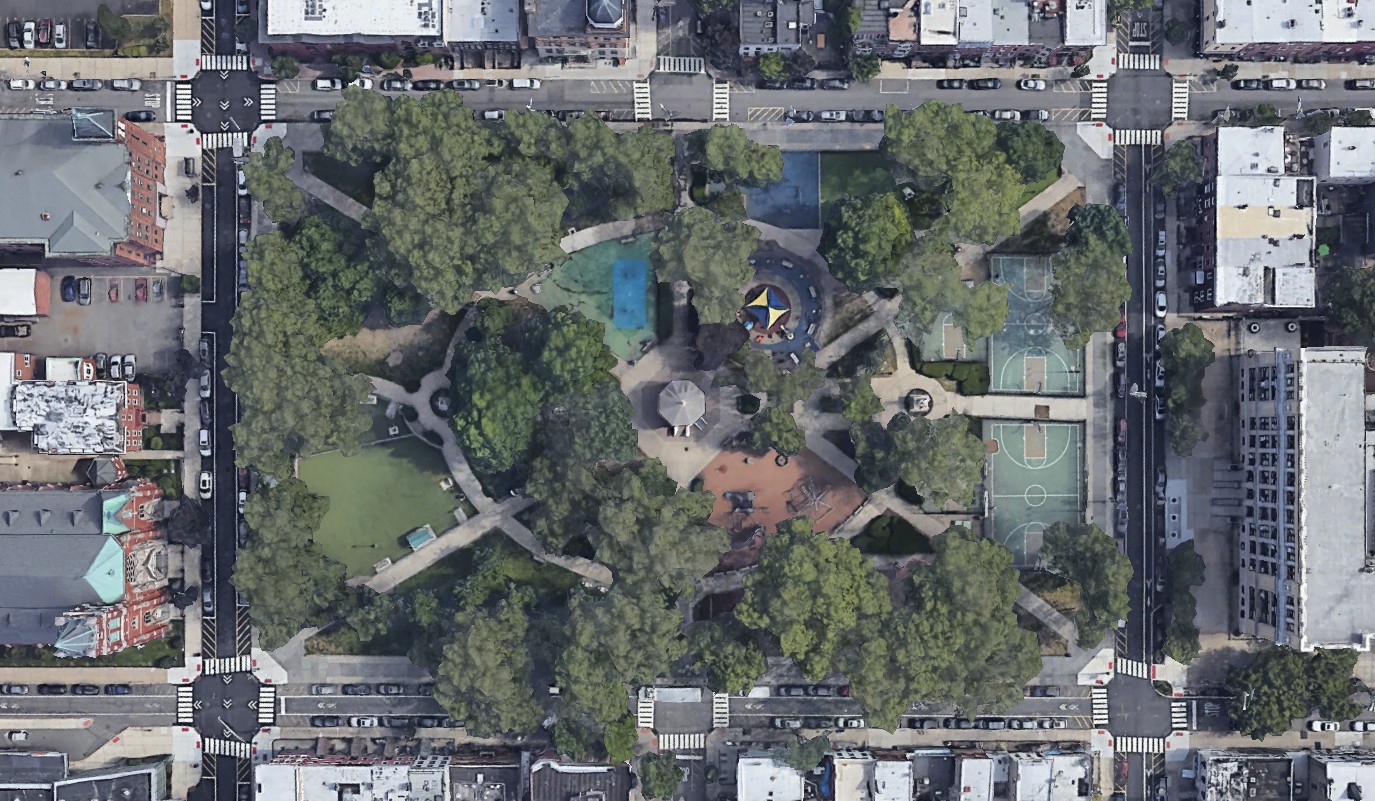 A birds-eye view of Church Square Park, one of the original Hoboken parks, established in the late 1800s.

National Arbor Day was observed this past Friday, April 29. For a group of Hoboken residents, it was an opportunity to take a tree tour of this mile-square city led by urban forester and ecologist Mary Charlotte Gitlin, sponsored by the City of Hoboken and the Hoboken Shade Tree Commission.

At the start of the tour, Ms. Gitlin explained that there are no native trees in town since originally, Hoboken was mostly a tidal swamp. And the intense urban and former industrial development of Hoboken left no natural tree habitats.

Yet today, Hoboken has thousands of trees to enjoy. Traveling via the Hop bus to various Hoboken parks and observing street trees along the way, the diversity of tree life was impressive. Although trees were just beginning to leaf out, Ms. Gitlin was quick to identify the various species.

At the first stop, Pier A Park, she pointed out the London plane, lacebark elm and ginkgo trees. The ginkgos on Pier A form a uniform grove, also referred to as a bosque, and are part of the 9-11 memorial dedicated to the 56 Hoboken residents who lost their lives in that tragic event. Beyond the ginkgos on the waterward end of Pier A are a grove of London plane trees planted in the late 1990s. The lacebark elms, also known as Chinese elms, are planted in a 4-block long row to the west of the walkway from Newark Street up to Fourth. Additional rows of London plane trees line the walkway as well as the edge of Sinatra Drive from Newark to Fourth. There are more than 300 shade trees planted at Hoboken’s South Waterfront.

The tour included two of Hoboken’s new resiliency parks, Southwest Park and 7th and Jackson Park. These open space areas have underground stormwater retention systems. During major rainstorm events, they retain millions of gallons of rainwater to alleviate flooding that occurs periodically in the western portion of Hoboken. At the latter park, there was a bald cypress and a swamp white oak, known for their ability to tolerate wet conditions. Also, there was a variety of American elm, selected for its resistance to the Dutch elm disease.

At Elysian Park, established in the early 1900s, there was a remarkable diversity of trees on display. The redbuds and crabapples were in bloom. Ms. Gitlin also pointed out linden and horse chestnut trees. At this point in the tour, everyone was able to identify the London plane trees.

Among the tour goers were Maggie Mallan, an officer of Friends of Elysian Park, and Jim and Rose Perry, members of Friends of Church Square Park. Ms. Mallan said there is an opportunity for people to make donations in order to have a tree planted when a space opens up in one of these parks. At Elysian Park, we saw a young linden dedicated to the memory of William and Mary Perry. This was made possible through a generous donation from their son and daughter-in-law, Jim and Rose Perry.

At the last stop, Church Square Park, we stood by a Norway maple. Across the street, there was a honey locust, another tree that survives well in an urban street environment. Also across the street, in front of the Demarest School were a row of young London Plane trees.

The London plane trees are found in abundance at Hoboken’s South Waterfront and also in Hoboken’s first parks: Stevens, Elysian, Church Square and Columbus, planted there originally more than 100 years ago, a testament to their ability to survive the rigors or urban life.

My organization, the Fund for a Better Waterfront, has been lobbying to extend the rows of shade trees at the South Waterfront to the north along Sinatra Drive from 4th to 11th Streets as part of the City’s current Sinatra Drive Project.

Throughout the tour, Ms. Gitlin explained the many benefits that shade trees provide our urban environment: they lower temperatures through transpiration; they absorb groundwater thus reducing the amount of rainwater going into the sewer system; they reduce pollution in the air; and they capture carbon and emit life-sustaining oxygen. All these benefits, of course, are in addition to the natural beauty they provide.

The City of Hoboken is currently undertaking a mapping and inventory of its tree population. Once completed, the public will be able to access this information online. The Hoboken Shade Tree Commission has a program to encourage Hoboken residents to plant street trees in front of their homes as well as care for the existing trees along their streets. Property owners are responsible for the street trees in front of their buildings. The City’s website provides instructions for how this can be done.