Pier A Park and the promenade from Newark up to Fourth Streets held up remarkably well after the punishing surge of the Hudson River during superstorm Sandy. The morning after, the 97 London Plane trees comprising the grove on Pier A and multiple rows along the promenade were all left standing. The 9-11 memorial ginkgo trees also were left intact. Just two of the trees growing between the bike path and the walkway were uprooted.

In 1994, when devising the plans for this park, landscape architects Henry Arnold and Cassandra Wilday devised an innovative planting technique that has allowed the trees, grass and shrubs to thrive. Throughout Pier A Park and underneath the paved walkway is a three foot depth of a specially formulated structural, “air-entrained soil” that has allowed the roots of the trees to quickly spread spread horizontally, thus providing for great stability. Mr. Arnold stated, “The key to all of these plantings is the large volume of soil to support and nurture the trees as a group.”

Several other portions of Hoboken’s waterfront parks did not fare so well. Pier C Park was seriously damaged. Recently opened, Pier C Park is built like an island on piles and platform over the Hudson River with mounds of earth and a children’s playground. Styrofoam blocks used as part of the underlying structure were knocked loose and scattered about the park. About 95% of the $20 million cost for this park was for the construction of the piles and platform. The park is now gated off at the two entrances.

At Maxwell Place Park, the former site of the Maxwell House Coffee Plant, about one-third of the London Plane trees were down at the river-end of the earthen peninsula. At the Weehawken Cove at the northern portion of the Hoboken waterfront, a large sail boat was lifted by the surging tides and grounded upon the Hudson River Waterfront Walkway. Throughout the waterfront parks debris and driftwood is scattered about. Any problems with piles and bulkheads may not be evident until engineers have an opportunity for a closer inspection.

Henry Arnold is the author of Trees in Urban Design (Van Nostrand Reinhold, 1994). In 1999, the American Society of Landscape Architects bestowed upon Pier A Park an honor award for design. That same year, the Waterfront Center based in Washington, D.C. designated Pier A Park the winner of the Excellence on the Waterfront honor award. The park got a third award from the New Jersey Society of Landscape Architects.

A number of factors exacerbated the storm. Sandy arrived in New Jersey at high tide during a full moon. Instead of heading back out to sea, the hurricane’s path was northeast, making landfall and bringing the surging waters with it. Fortunately, little rainfall occurred during this extreme weather event; otherwise unprecedented flooding in Hoboken would have been worse. 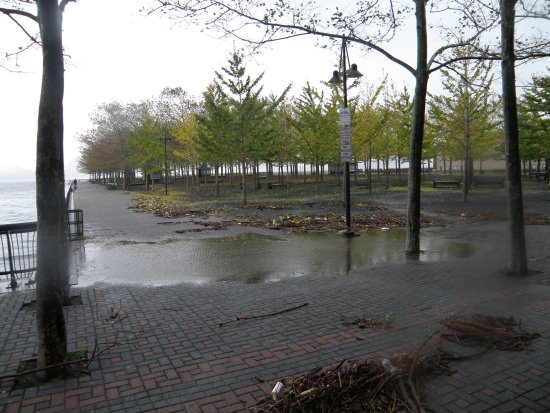 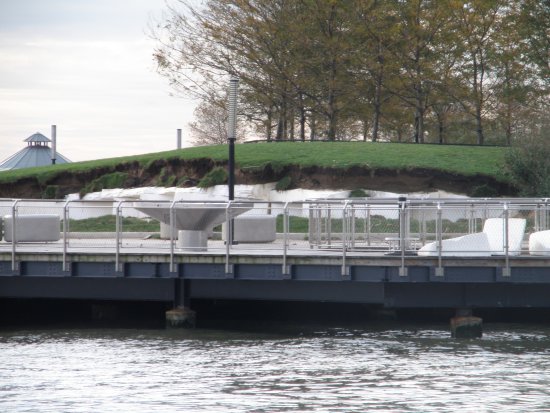 Dutch Dialogues: a model for Hoboken
Flood insurance rates will skyrocket
Monarch Towers now in FEMA’s Coastal High Hazard Flood Zone
79% of Hoboken falls into FEMA’s flood zone
Post Sandy: After repairing the damage, then what?
12-Point Plan in preparation for the next Sandy
Sandy, the day after – Hoboken waterfront pics
The Long Slip Canal and protecting Hoboken from the next surge
Roots over the river