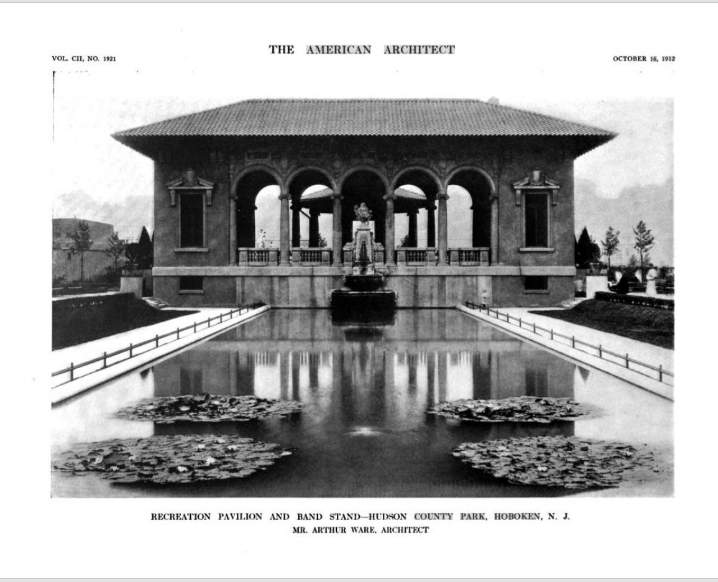 Walking through Columbus Park, one is struck by the pavilion, designed to be the centerpiece of the park, and the massive London Plane trees planted throughout. The roof cornice of the pavilion projects out six feet, supported by heavy cypress beams. An October 1912 article in The American Architect calls the park, originally named Hudson County Park, “A Playground for Little Children.”

The article states, “Time will bring out the effect which has been sought — an avenue of trees flanking either side of the promenades leading to the Pavilion, providing a setting for it, and at the same time enhancing the vistas on the central axis, and connecting the sunken garden about the Lily Pool.”

In 1912, the London Plane trees had just been planted. Today, more than a 100 years later, the trees have become immense, some with trunks three feet in diameter and heights of fifty feet. The landscape architect for the park was Charles Nassau Lowrie, who was active in the “City Beautiful” movement and past president and founding member of the American Society of Landscape Architects. For thirty years, Lowrie was the landscape architect for the Hudson County Park Commission. He designed Lincoln Park and Pershing Field Memorial Park in Jersey City and Stephen R. Gregg Hudson County Park in Bayonne.

Today, the pool is gone as well as the band stand that stood behind the pavilion. The western portion of the park design has also been eradicated. Yet, the park is still remarkable and has been lovingly maintained by the Hudson County Parks Department. The London Plane trees are a testament to the original design of Lowrie who could envision what they would look like today.

The London plane tree is a hybrid between the native American sycamore and the non-native oriental plane tree that first appeared in London in 1645. It quickly became popular in urban parks and streets due to its rugged ability to thrive in polluted air and ability to withstand drought and other adversities. The Worcester Tree Initiative said of the London plane tree, “Beyond its reputation as a survivor, this tree is simply worth admiring. The unique bark and interesting branching give it amazing visual appeal—whether summer or winter.”

These same trees can be found in abundance in Hoboken’s first parks, Church Square Park and Stevens Park. When the park at the Hoboken South Waterfront was built in the late 1990s more than 174 London plane trees were planted from Newark to Fourth Streets and a grove of 97 at Pier A Park. The design has garnered numerous awards, including one from the American Society of Landscape Architects and another from the New Jersey Society of Landscape Architects.

Lowrie lived from April 8, 1869 to September 18, 1939. He graduated from Yale’s Sheffield Scientific School in 1891. His projects outside of Hudson County included the Red Hook Housing Project in Brooklyn, the city plan for Columbus, Ohio, the first master plan for Penn State and the master plan for the University of Connecticut. He was also on the 1939 New York World’s Fair staff. 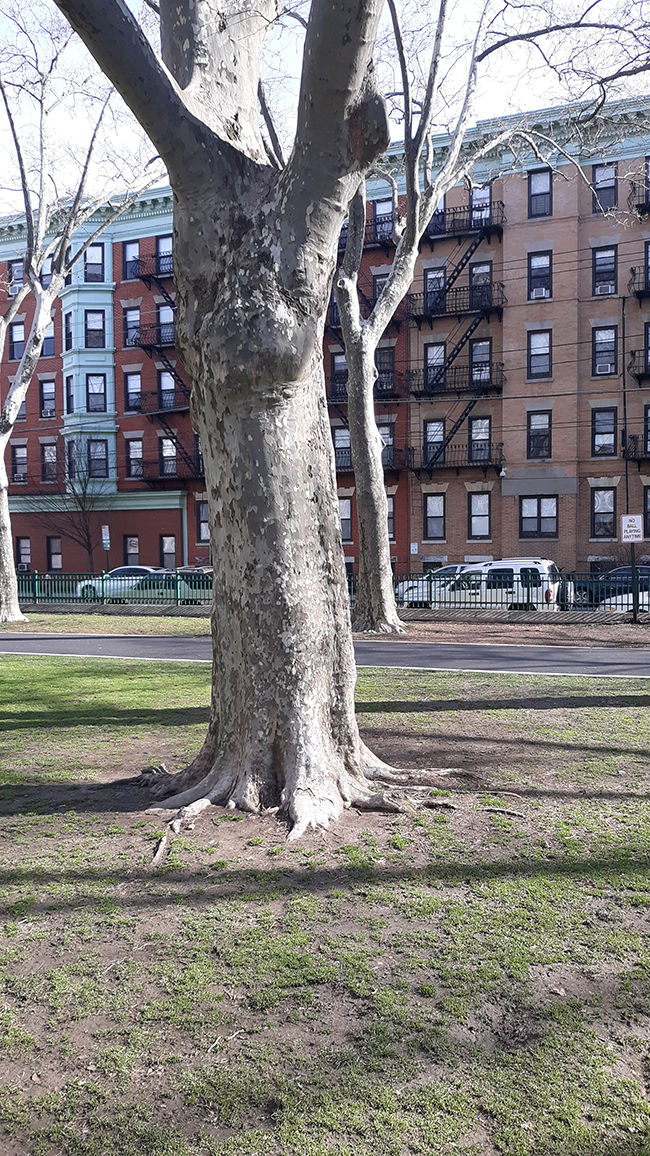