The Hoboken Planning Board will review the Rail Yard Redevelopment Plan and hold a public hearing on Tuesday, December 2 @7 p.m. in City Hall.

Hoboken residents will often point to the high-rise towers at Newport in Jersey City looming to the south of town, saying, “that’s not the kind of development we want to have in Hoboken.” In fact, over the past 30 years, many battles have been fought over high-rise development proposals in Hoboken. Most of those projects were defeated through referenda, litigation or public pressure. A few, amid much controversy, such as the 27-story W Hotel at Hoboken’s South Waterfront, were built.

The administration of Mayor Dawn Zimmer has deliberated for over five years on a redevelopment plan for the Hoboken Rail Yards that would run south of Observer Highway from Marin Boulevard to the Hoboken Train Terminal, covering some 10.2 acres. On October 28, the City unveiled an amended redevelopment plan that resembles Newport in Jersey City, not Hoboken, with towers nearly as tall as the terribly out-of-scale W Hotel, on over-sized blocks.

The failure to extend Hoboken’s street grid to the south through the redevelopment area will result in the commercial portion of the project becoming what resembles a commercial office park. Most of Hoboken’s north-south streets, including Washington, Bloomfield, Garden and Clinton do not connect through this proposed new development site. As a result, there are not clearly delineated development parcels on Hoboken-size blocks. The lack of a connected street system also creates problems with traffic circulation, forcing yet more traffic onto the already overwhelmed Observer Highway. Putting through the north-south streets is also the most important step in preventing an uninterrupted wall of buildings facing Observer Highway.

As Hoboken developed over the past 200 years, its urban character became manifest. Rows of buildings fill out the perimeter of blocks on small lots, hugging the front property line. Most buildings cover 50 per cent of the lot, thus leaving the interior of each block as private open space. Most buildings are brick or brownstone and are from three to five stories high, creating a human scale to the town that is one of its most endearing qualities.

The amended Rail Yard Redevelopment Plan fails to reflect these signature Hoboken characteristics. Understandably, structures along Observer Highway would be built to a larger scale since it is the city’s widest street. Also problematic is the Redevelopment Plan’s residential buildings arranged in an odd configuration that no developer would ever build in that manner. The project requires distinguished architecture, on an appropriate scale, facing Observer Highway in order to create a notable entrance into town.

The major changes in this amended Redevelopment Plan involve the addition of flood mitigation measures and provisions for increased development and building heights in return for constructing LEED (Leadership in Energy and Environmental Design) certified buildings. The incentive for LEED certification allows for an additional 125,000 square feet of development and two additional stories for the commercial towers between Park Avenue and Washington Street. This would result in two 20-story towers and one 24-story tower, rivaling the tallest buildings in Hoboken and far exceeding the typical human scale of the town’s architecture. Building to LEED standards should be a requirement of this project, not an incentive for yet taller buildings. 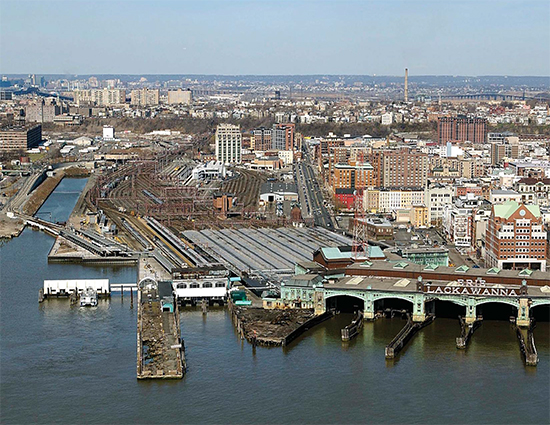 The Redevelopment Plan proposes “new” open space in the Warrington Plaza at the Hoboken Train Terminal. Yet this plaza has been listed in Hoboken’s public open space inventory since the 1970s. Only recently has the plaza been usurped for a New Jersey Transit parking lot, possibly violating prior state Green Acres agreements. Other smaller plazas provided in the redevelopment plan would create unusable private open space that would lie in the shadow of the northward facing buildings.

Also, unclear are what give-backs could be provided to the City by New Jersey Transit in exchange for authorizing the Redevelopment Plan. Both the City of Hoboken and New Jersey Transit are recipients of large federal grants for flood mitigation. The City will get $230 million for a comprehensive city-wide plan and New Jersey Transit, $146 million for the rail yards and train terminal. The Redevelopment Plan does not make clear how these or other grants will come into play for the Rail Yard project. If the City is not able to state clear goals for benefits it will receive from this development, it is likely to negotiate a bad deal for Hoboken.

At their November 5th meeting, on “first reading,” the Hoboken City Council voted to approve this Redevelopment Plan. By doing so, the Council referred the plan to the Hoboken Planning Board for a hearing and to receive the Board’s recommendations. Then the plan returns to the Council for a final vote. The Planning Board hearing is scheduled for Tuesday night, December 2nd.

It would be a mistake to underestimate the significance of this project. The scale and importance is equal to the development of Hoboken’s South Waterfront along Sinatra Drive from First to Fourth Streets. This project, if done right, could create a grand entrance at the south end of Hoboken and be a great addition to our community.