The life and potential death of the Hoboken Cove

The life and potential death of the Hoboken Cove


Angel Martinez and his friends can often be found at the public fishing pier in the Hoboken Cove a few hundred feet from the Union Dry Dock property. For them, this is a special place, removed from the hubbub of urban life, out over the mighty Hudson River with first-rate views of the Manhattan skyline. Most of what they find there are migratory fish: American shad, striped bass, blueback herring, Atlantic sturgeon, shortnose sturgeon and American eel.

All of these fish spend most of their adult life in the Atlantic Ocean and swim up the Hudson River to spawn, except for the American eel. The American eel migrates from the fresh waters upstream down into the ocean to lay its eggs. The New Jersey Department of Environmental Protection (NJDEP) has categorized all of these migratory fish as “species of concern.” Two of these — the Atlantic sturgeon and shortnose sturgeon — are currently on the federal “endangered species” list.

In 2004, a group of local kayaking enthusiasts founded the Hoboken Cove Community Boathouse. The developers of the Maxwell Place residential development donated four acres of their land on the river-side of Sinatra Drive North to the City of Hoboken for a public park and built the boathouse in the park that stores the group’s kayaks just above a natural sand beach at the Hoboken Cove.

Today, Jon Miller is President of the Hoboken Cove Community Boathouse. Mr. Miller has kayaked up and down the Hudson River many times and says that the natural sand beach at the Hoboken Cove is unique. There is no other comparable beach south of the George Washington Bridge along the Hudson River coastline on either the New York or New Jersey sides. The Hoboken Cove also provides an area protected from the powerful currents of the Hudson due to its location bounded on the south by Castle Point, a natural outcropping of serpentine rock, and on the north by an earthen peninsula at Maxwell Place Park. As a result, the beach and the Cove provides a safe, inviting environment for kayakers of all ages and skill levels to enjoy the Hudson River.

The Hoboken Cove Community Boathouse is an all-volunteer organization that provides a free program putting over 6,000 kayakers into Hudson each year. Currently, this is the only location along New Jersey’s Hudson River coastline where such a program exists. The boathouse is also home to the Ke Aloha Outrigger Canoe Club. The two groups sponsor the popular Polynesian Festival and Hudson River Cup Races that bring hundreds of visitors to the Hoboken Cove and includes boat races, hula dancing, live music and free kayak safety clinics.

The natural beach and protected cove brings Noelle Thurlow’s group, Resilience Paddle Sports, to this site as well. Ms. Thurlow and her staff offer paddleboarding classes. She also teaches environmental classes for children that catch and release various marine wildlife. Ms. Thurlow, who is working on her Master’s degree in Conservation Biology, has also conducted a 3-year biodiversity study at the Hoboken Cove and nearby waters. She has identified a total of 72 species of marine and shore wildlife at Hoboken’s north waterfront.

Noelle Thurlow has spoken before Hoboken City Council and at the April 20th “Rally to Protect Our Waterfront” at the Hoboken Cove giving an eloquent and passionate plea to protect the marine and shore wildlife at this site. Her January 2018 study, entitled Biodiversity of the Hoboken Waterfront – A survey of species richness, urban impact & sustainability, has provided documentation needed to convince public officials that the Hoboken Cove is an ecologically significant area that must be protected.

Ms. Thurlow has observed horseshoe crabs mating and laying their eggs at the Hoboken Cove beach, one of the few areas where this is possible along New Jersey’s Hudson River coastline. This species serves a critical role in the area’s marine ecosystem and the NJDEP has long recognized that protecting horseshoe crab spawning habitat “is critical to the survival of hundreds of thousands of shorebirds as they migrate to Arctic breeding grounds each spring.”

Noelle Thurlow has also identified an “endangered species” shortnose sturgeon after it had washed up on the beach at the Hoboken Cove. From the Union Dry Dock site, Ms. Thurlow also viewed in the river channel another federal “endangered species,” a mammal, the humpback whale. In her study, she has spotted a number of shore birds — the osprey, American kestrel and blackcrowned night-heron — all categorized by the New Jersey Division of Fish & Wildlife as “threatened.” The Conserve Wildlife of New Jersey website lists the common tern in the “special concern” category and states that the diamondback terrapin has been recommended by the State of New Jersey for “special concern” status. Ms. Thurlow has seen the common tern at the Cove and observed several times each year the diamondback terrapin swimming near the Union Dry Dock piers.

Various studies have documented that natural sand areas sloping into the river support a greater diversity of wildlife than vertical, hard-edged engineered structures consisting of bulkheads, cribbing or riprap. Most of New Jersey’s urban Hudson River coastline consists of a hard edge. The beach at the Hoboken Cove is also in an intertidal zone thus encouraging a richer, more diverse marine habitat. This environment provides marine vegetation and smaller marine species that serve as an important food source for larger fish.

Today, the shortnose sturgeon is in danger of extinction throughout its range. The primary threats to this species include habitat degradation, water pollution and dredging. The coastal waters of the NJ/NY Harbor Estuary is an understudied and poorly understood area in regards to the fate of juvenile fish like the shortnose sturgeon and striped bass. Although most research is focused on the spawning habits of sturgeon in the Upper Hudson, little attention has been paid to the natural shoreline areas such as the Hoboken Cove that is likely a key environment for juvenile fish to live and seek shelter before they migrate to the rougher waters of the ocean.

According to NOAA Fisheries, following spawning, the Atlantic Sturgeon males may remain in the river or lower estuary until the fall; females typically exit the rivers within four to six weeks. Juveniles move downstream and inhabit brackish waters for a few months consuming a diet of crustaceans, worms, and mollusks. When they reach a size of about 30-36 inches, they move into near shore coastal waters. 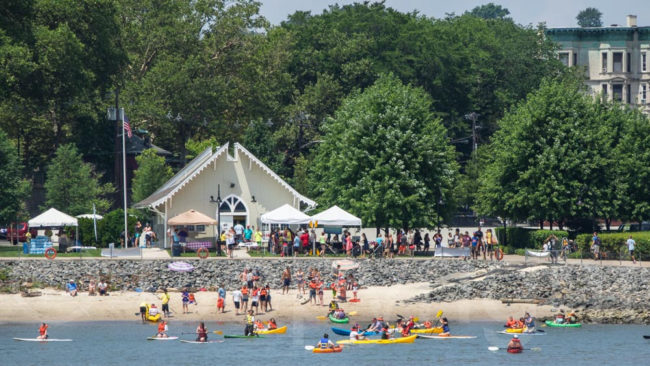 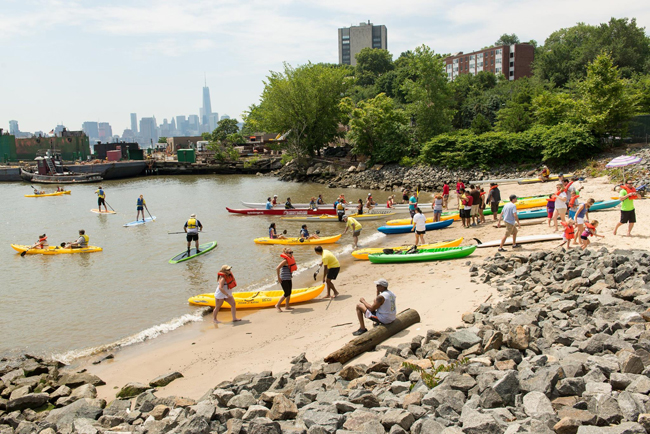 The Hoboken Cove beach with Union Dry Dock in background on City of Water Day sponsored by the Waterfront Alliance.

Since the Atlantic and shortnose sturgeon are both on the federal “endangered species” list, the Army Corps of Engineers is required to scrutinize carefully NY Waterway’s application to locate a ferry maintenance and refueling facility at the former Union Dry Dock property. They will also need to ensure that NY Waterway’s application does not violate the state NJDEP Coastal Zone Management regulations protecting various marine and shore wildlife as well as public access and use of waterfront areas. The Fund for a Better Waterfront has provided all of the information contained in this article — plus much more — to the Army Corps, making the case that a full Environmental Impact Statement must be undertaken.

If the state and federal government permit an industrial ferry refueling/maintenance facitilty at the former Union Dry Dock site, it would be the death of the Hoboken Cove. Dredging would be required. It would result in frequent, high-speed ferry traffic 18 hours daily, 7 days a week, resulting in corresponding wakes and turbulence. The diesel refueling and inevitable spills would foul both the air and the water with hazardous chemicals. Oil, lubricants, grease and sanitary wastewater would be introduced to the site, some of which would find its way into the surrounding waters. The Hoboken Cove would no longer be hospitable or safe to the marine life, nor the fishermen, kayakers, paddleboarders, skateboarders and families that now depend on this unique site for their recreation needs.

Also note, just this past January, NY Waterway spilled over 300 gallons of diesel fuel one-third of which flowed into the Hudson River at its Weehawken refueling site and in August 2016, The New York Times reported that a NY Waterway ferry collided with a group of 10 kayakers in the Hudson River, injuring five, near 39th Street in Manhattan.