In 1996, the Hoboken Planning Board approved the Shipyard Associates’ planned unit development (PUD) for 1160 units at Hoboken’s north waterfront. This massive project is fully built, but apparently 1160 units are not enough for developers Michael and David Barry. The Barry brothers now want to add two 11-story towers at the pier at the north end of this site which was designated as open space in the original 1996 Planning Board PUD approval.

In May 2011, Shipyard Associates submitted their proposal to New Jersey Department of Environmental Protection (NJDEP), applying for a waterfront development permit.  A number of parties have written to the NJDEP voicing their strenuous objections to the towers including Hoboken Mayor Dawn Zimmer, the Fund for a Better Waterfront (FBW) and the Hudson Tea Building.  The towers would take away badly needed open space, block views to the Hudson River and the New York City skyline, and add yet more units to an over-developed part of town.

FBW has successfully fought a series of proposals to build on the piers in Hoboken beginning in 1990 with the 33-story commercial complex proposed by the City of Hoboken and Port Authority of New York & New Jersey. In that same year, FBW unveiled its proposal for a continuous public park at the water’s edge in Hoboken. Pier development would thwart the opportunity to make that park continuous for the entire length of Hoboken’s 1.5 mile waterfront. In 2001, FBW and other groups succeeded in getting Shipyard Associates to withdraw its proposal to build 120 townhouses on the 16th Street Pier, as an amendment to the 1996 PUD approval.

On August 25, 2011, Shipyard Associates submitted their application to the Hoboken Planning Board for an amended site plan approval. A decision from the NJDEP is expected in early November. 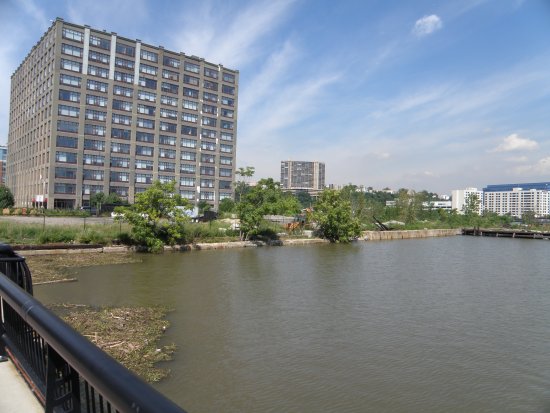 This pier in the Weehawken Cove is the site for the Shipyard Associate’s proposed Monarch twin towers.

The Barry brothers now want to add two 11-story towers at the pier at the north end of this site which was designated as open space in the original 1996 Planning Board PUD approval.