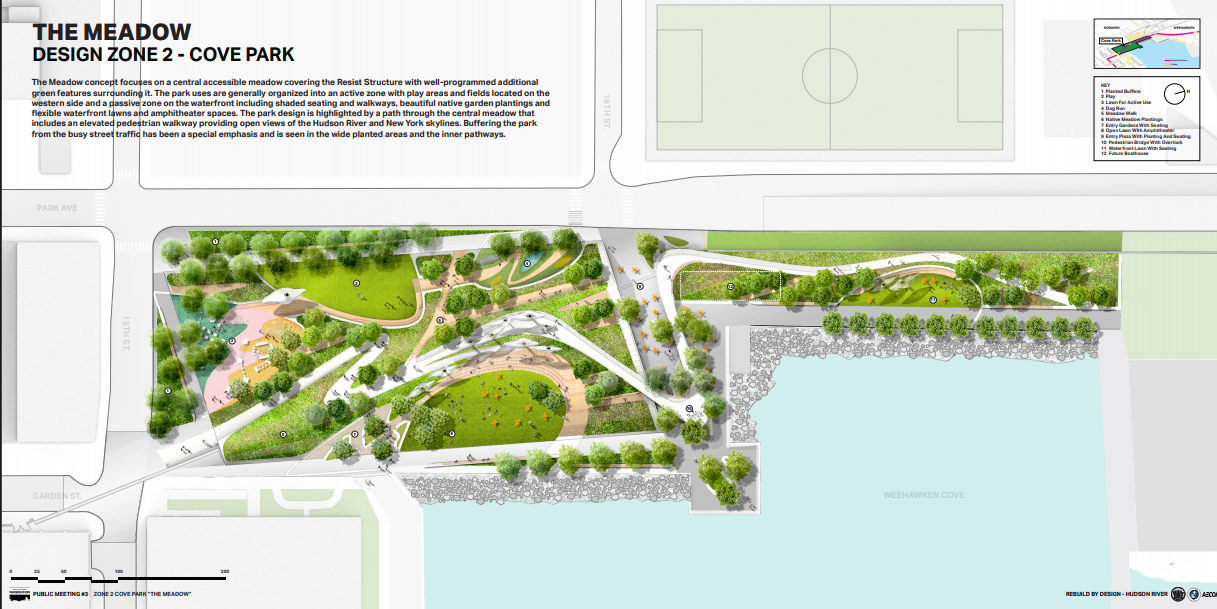 One of two alternate landscape plans for the Rebuild by Design park at the Weehawken Cove that ends abruptly at the Weehawken municipal boundary where the Hartz 18-story towers have been proposed.

Update: At the October 29 meeting, in a dramatic turn of events, the Weehawken Planning Board voted unanimously to deny Hartz Mountain’s application to build the two high-rise towers at the Weehawken Cove.

In March, Hartz Mountain Industries, the developer of Lincoln Harbor, submitted an application to build a massive project at the Weehawken Cove abutting the planned Rebuild by Design park in Hoboken. Neighboring residents from Weehawken, Union City and Hoboken have attended the Weehawken Planning Board hearings objecting to the building heights — two 18 story towers exceeding 200 feet — and scale — nearly 100 percent lot coverage.

In 2012, 800 linear feet of the Hudson River Waterfront Walkway (HRWW) was completed around the Weehawken Cove funded through a federal grant of $3.2 million and $515,000 from the Hudson County Open Space Trust Fund. The grant monies were provided because this was considered a “gap site” for the state-mandated 18-mile public walkway between the Bayonne and George Washington Bridges. Private developers along the Hudson River are required by the State of New Jersey to build their portion of the HRWW as a condition for building on lands termed the “filled water’s edge” where the Hudson River once flowed. Since most of this land is owned by the City of Hoboken, no developers were on the hook to construct this portion of the walkway.

Today, this part of the HRWW provides a link between Hoboken and Weehawken and is heavily traveled by walkers, runners, cyclists and scooter riders. This protected inlet of the Hudson River, a short distance from the Lincoln Tunnel and the densely developed surrounding area, provides a tranquil public space for all to enjoy.

The Hudson River Rebuild by Design project is poised to take this open space to the next level by building a four-acre public park behind the waterfront walkway at the western edge of the Cove that will also serve as a barrier to future storm surges with the flood wall concealed within the landscape design of the park. This $230 million federally funded project began several years after Superstorm Sandy in 2013, originally entitled Resist Delay Store Discharge, a Comprehensive Strategy for Hoboken. The “resist” flood wall will protect the low-lying Hoboken/Jersey City border at the south and the Hoboken/Weehawken border at the north, both of which were conduits for the unprecedented flooding of the Hoboken area during Sandy.

Despite the intense planning for this project that has been ongoing for the past six years, the surge protective park ends abruptly at the Weehawken side of the municipal boundary and becomes an exposed ten foot wall, running behind these proposed towers. While state and local officials, teams of consultants and the public have engaged in a vigorous, open public process, the Township of Weehawken paved the way for intense private development at the Weehawken Cove on the river-side of the “resist” flood barrier.

In 2016, after creating a new redevelopment plan for Lincoln Harbor, the Township of Weehawken granted authority to the Planning Board to set the standards for building heights, lot coverage, and number of units. This project abuts the HRWW’s 30-foot easement to the east and south and the 15-foot NJDEP easement for the flood wall to the west. The structure, with 7-stories of parking at its base, covers nearly the entire site.

Fortunately, opposition to the project has been growing. The Fund for a Better Waterfront is now represented at the hearings by its land-use attorneys from Miller, Porter & Muller of Princeton, New Jersey. Nearby property owners are also represented by counsel in opposition to this application.

The Weehawken Planning Board ruled that one of the objector’s attorneys, Daniel Steinhagen of Beattie Padovano, had a conflict of interest since his firm represented the Township of Weehawken up until recently. Mr. Steinhagen participated in the first hearing and subsequently wrote to the Planning Board’s counsel on May 28, 2019, spelling out the myriad legal problems posed by this application including the following:

A portion of the project site is in Hoboken. This will require additional approvals from the Hoboken Planning Board. A NJDEP waterfront permit is pending and has also been challenged by objectors.

Hartz has been developing the Lincoln Harbor portion of the Weehawken waterfront for over 30 years. Until recently, most of the development has been commercial. In the past few years, however, Hartz has begun to fill up the undeveloped parcels with residential projects including the 589-unit Estuary, the 236-unit Harbor 1500 and the 573-unit 800 Harbor Boulevard (currently under construction), located directly north of the proposed 344-unit 18-story towers. With scores of units also being built at Weehawken’s waterfront north of Lincoln Harbor, the population of Weehawken has grown over 18% in the past 8 years.

The next Weehawken Planning Board hearing for this development application is scheduled for August 20 at 7:30 p.m. at the Weehawken High School.