June 21 update: Judge Patrick Arre denied the motion for summary judgment filed by City of Hoboken and other plaintiffs on Friday, June 21 at the William J. Brennan Court House in Jersey City, New Jersey. The court ruling means that the Hoboken Planning Board must now hold hearings and rule on the Monarch application.

In its brief to the Court filed on May 15, the City argues, “This case is a classic example of bait and switch, in which a developer tells the public what it wants to hear in order to obtain governmental approvals — until the time comes to actually make good on those promises.” The City of Hoboken joined by the Fund for a Better Waterfront (FBW) and the Hudson Tea Building Condo Association filed a motion seeking summary judgment against the defendant developer Shipyard Associates.

Beginning in 1997 and throughout the approval process, the developer assured the City of Hoboken that it would provide public recreational and waterfront access improvements at the “North Pier” at the northern end of the site as part of its 1160-unit Shipyard project. Now that all of the residential and commercial units have been built, the developers argue that they were never bound by the agreement they signed with the City in 1997 and were always free to change their mind at any time. In its brief, the City responds: “Shipyard’s disdainful view of 1997 Agreement is not supported by the law.”

Summary judgment would allow the judge to make a ruling based on the facts and legal merits of the case, thus avoiding a lengthy trial. The motion filed seeks a decision declaring that 1997 Agreement remains in full force, finding Shipyard to be in breach of the 1997 Agreement and enjoining Shipyard from conducting any development on what is called Development Block G or the North Pier other than what is in strict accordance with plans referenced in the 1997 Agreement.

In 1997, the Hoboken Planning Board granted approval to build the 10-acre Shipyard Project comprised of 1160 residential units on prime real estate at Hoboken’s northeast waterfront. In conformance with the Board approval, the Shipyard Associates signed a developer’s agreement with the City of Hoboken that included provisions to build the last portion of this site, about 1.4 acres of land and pier, as open space with tennis courts, a tennis pavilion plus a portion of the state-mandated Hudson River Waterfront Walkway within two years of completing the final units.

By 2011, after completing the 1160 unit development, David and Michael Barry of the Shipyard Associates sought to renege on their 1997 agreement by proposing to build two high-rise towers, dubbed the Monarch, in place of the promised open space, thus adding another 78 units to their project.

In March 2012, the City of Hoboken filed suit against the Shipyard Associates seeking to enforce the 1997 developer’s agreement and charging “breach of contract.” Subsequently, Judge Patrick Arre allowed the Fund for a Better Waterfront (FBW) and the Hudson Tea Building Condo Association to intervene in the case in support of the City’s case. 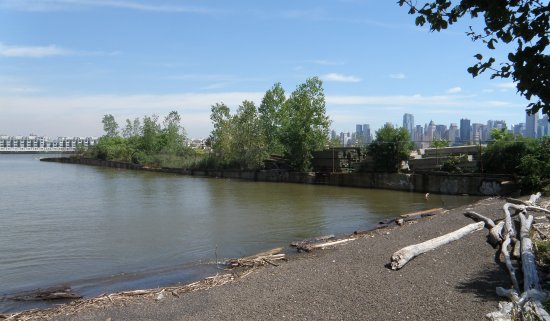 Development Block G at the Shipyard, an open space pier proposed for 2 towers.

As of this year, the Monarch project has an additional hurdle in that the project is sited squarely within FEMA’s new Coastal High Hazard Flood Zone. In Section 3.18 of the New Jersey Department of Environmental Protection (NJDEP) Coastal Zone Management Rules (N.J.A.C. 7:7E) multi-family residential development, including hotels and motels, are prohibited in the Coastal High Hazard Zone. In January, FEMA revised its flood maps for the first time in 25 years, thus greatly expanding flood zones that dictate certain building and flood insurance requirements.

At the end of 2011, the Shipyard Associates obtained a waterfront permit from the NJDEP to build the Monarch towers. FBW, the City of Hoboken, and the Hudson Tea Building all filed an appeal of the waterfront permit. A year and a half later, this case, to be heard before the state’s Office of Administrative Law, is still pending.

Last year, the Shipyard application for the Monarch project was denied by both the Hudson County Planning Board and the Hoboken Planning Board. The appeals of these decisions were also consolidated before Judge Arre who will be ruling soon on the motion for summary judgment.

City of Hoboken 5-15-2013 brief
City’s complaint filed in Superior Court of NJ
County stuns developers with “no” vote
Can the waterfront walkway be a “street”?