FBW proposes a landscape plan for the Sinatra Drive Project

The perimeter of Hoboken, including its waterfront, has been dubbed a “green circuit.” Yet, preliminary plans unveiled last May by the City for the Sinatra Drive Project bordering the Hudson River, lacked a plan for street trees. In response, the Fund for a Better Waterfront (FBW) hired the Princeton, New Jersey landscape architecture and urban design firm, Arnold Associates, to develop a landscape plan for Sinatra Drive.

After securing two New Jersey Department of Transportation grants last year totalling $1.2 million, the City of Hoboken awarded a contract to the engineering firm Kimley-Horn to design and oversee the reconstruction of Sinatra Drive. The grants provide for a protected bicycle pathway along the ¾ mile of roadway from Fourth Street up to Hudson near Eleventh.

In July, Stephen Lederach of Arnold Associates presented FBW’s street tree plan to City officials. The plan includes a row of shade trees lining Sinatra Drive spaced about every 24 feet that will eventually form a canopy covering the sidewalk and bike path. Mr. Lederach stressed the need to provide the proper volume of soil to support and nourish the trees, allowing them to thrive in the years ahead.

Currently, Sinatra Drive is a barren landscape with few trees north of Sinatra Park around Castle Point on the river-side of the street, providing no relief for pedestrians during the dog days of summer. The overly-wide traffic lanes on Sinatra Drive encourage speeding and unsafe conditions for cyclists and pedestrians.

The Sinatra Drive Project will narrow the traffic lanes to 11 feet each way. The two-way bicycle pathway will be the NACTO-recommended 12 feet wide with a median separating the cyclists from the roadway. The sidewalk on the river-side of Sinatra Drive will be up to 10 feet across.

At Union Dry Dock, FBW proposes a row of trees to be planted along the sidewalk with soil beneath extending 9 ½ feet from the curb to the eastern edge of the sidewalk to a depth of 3 feet. A 3 foot wide row of granite cobblestones would provide a permeable surface for the trees. (See first image above.) North of Sinatra Park, FBW proposes a landscaped swath east of the sidewalk with another row of shade trees. (See second image above.) An added design feature would be the addition of granite cobblestones in the median separating the bike path from the roadway. 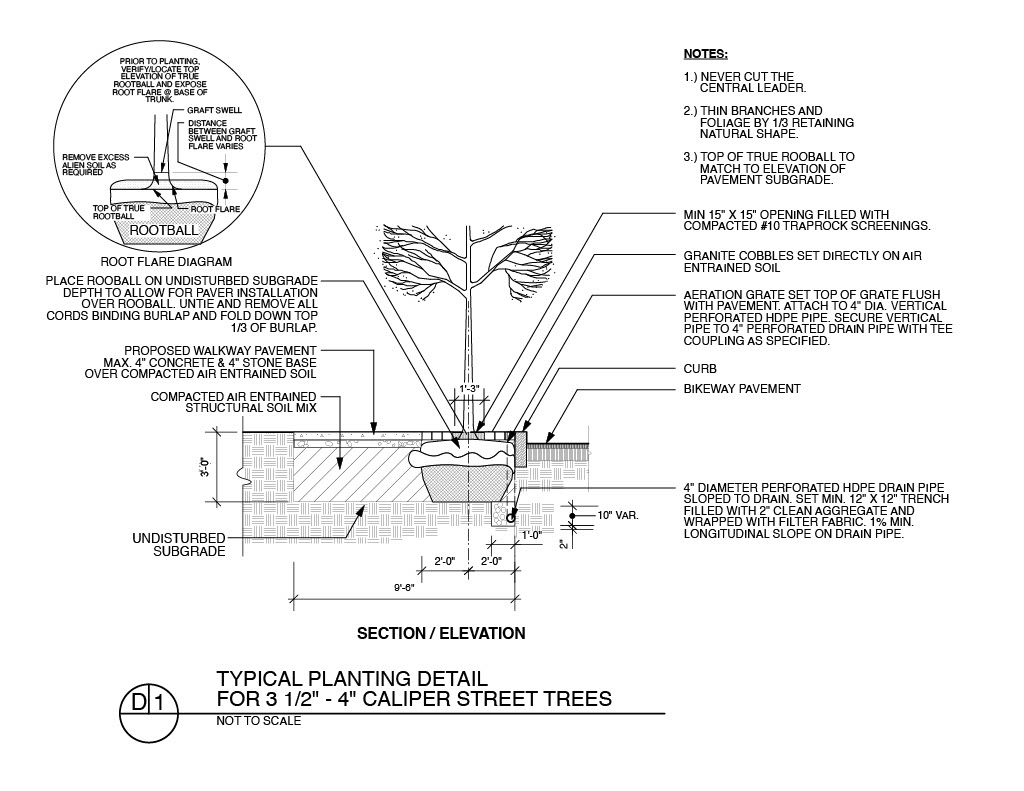 Planting detail for street trees prepared by Arnold Associates for the Fund for a Better Waterfront.

FBW’s landscape plan will connect the generous, lush plantings at Hoboken’s South Waterfront up to Maxwell Place Park. In the 1990s, Arnold Associates designed and implemented the plan for the South Waterfront from Newark to Fourth Streets with over 300 shade trees. This exceptional landscape design garnered awards from the American Society of Landscape Architects as well as the Waterfront Center in Washington, D.C.

The Kimley-Horn/City plans unveiled in May showed that up to 70% of the existing on-street parking spaces on Sinatra Drive could be lost. Although most people access the Hoboken waterfront on foot, a City survey indicated that 30% come by car. Finding ways to make Hoboken’s waterfront accessible to all, even those who come from the west side of town or from surrounding communities, has been a priority for FBW.

Last December, the City signed a generous $623,100 contract with Kimley-Horn to implement the Sinatra Drive Project. Although the contract promised to show several alternatives for various sections of Sinatra Drive, the firm proposed just one alternative or several that were essentially the same for a number of the sections. Kimley-Horn is an engineering firm specializing in transportation issues with 5,000 employees in 100 offices across the country.

Kimley-Horn had a prior contract to redo Sinatra Drive in 2014 during the Zimmer Administration. The project stalled and was never completed at that time.

Construction is scheduled to begin next year. The next public meeting on this project will be scheduled in the weeks ahead.

In praise of London plane trees in London . . . and in Hoboken
Hoboken’s South Waterfront is a model for trees in urban design
FBW memo to City re: May 11 Sinatra Drive Project
The Sinatra Drive Project is an opportunity to upgrade the long neglected central waterfront
Col. Stevens vision for Hoboken still valid 200 years later
Editorial: A Once-in-a-century Opportunity
Plan for the Hoboken Waterfont
Hoboken’s first parks established in 1804
Roots over the river