After a contentious, multi-year battle, City will acquire Union Dry Dock, one of the final missing links in Hoboken’s waterfront park

After a contentious, multi-year battle, City will acquire Union Dry Dock, one of the final missing links in Hoboken’s waterfront park 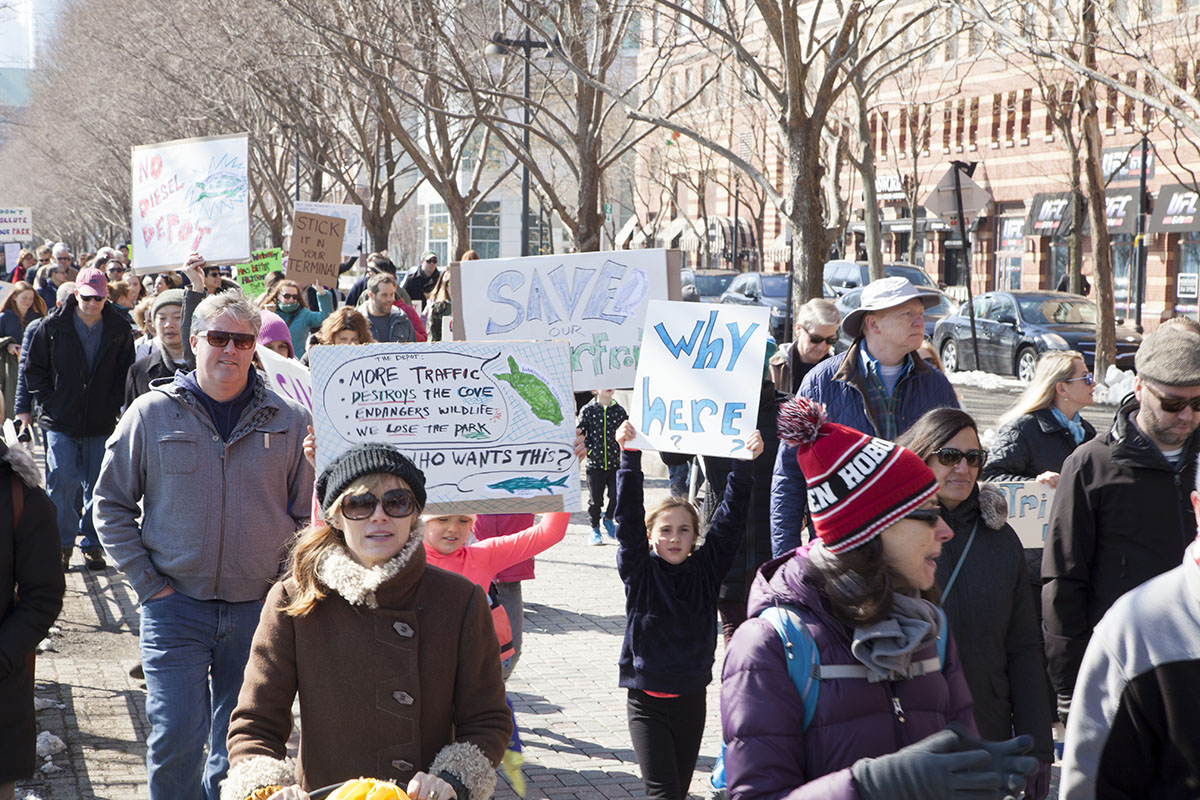 Protesters in the 2019 March on March 9 to Save Your Waterfront.

In November of 2017, NY Waterway sought to relocate its ferry refueling/repair operation to one of the final, unfinished portions of Hoboken’s continuous, public waterfront park. The ferry company’s acquisition of the Union Dry Dock property began a battle royale, pitting Mayor Ravi Bhalla and an outraged community against NY Waterway, Governor Murphy and NJ Transit.

In a settlement announced on June 17th, Governor Murphy supported Hoboken’s effort to secure the land for public open space. NY Waterway has agreed to rebuild its facility in Weehawken aided by proceeds from the sale of the Union Dry Dock property plus additional funds committed by NJ Transit.

Thirty years ago, controversy raged over how the first portion of Hoboken’s waterfront would be developed. Voters rejected a City of Hoboken/Port Authority development proposal in two referendums, the first in 1990 and the second in 1992.

After the 1990 referendum, local residents established the nonprofit Fund for a Better Waterfront (FBW) charged with the mission to develop an alternative plan for Hoboken’s waterfront. FBW hired architect Craig Whitaker who laid out the unifying element of the plan: a continuous, public park at the water’s edge. By the late 1990s, the first portions of this park were built for a six block stretch of the south waterfront.

Now, three decades later, the recent agreement allowing the City to acquire the Union Dry Dock site will secure one of the final missing links in Hoboken’s waterfront park, connecting Castle Point Park to Maxwell Place Park. It will complete the city’s last portion of the state-mandated Hudson River Waterfront Walkway. It will add more than three acres of public open space with unimpeded views to the Hudson River and Manhattan skyline. It will open up the opportunity to extend the protected bicycle pathway ending at Fourth Street all the way up to Eleventh Street.

The Union Dry Dock Company, a small barge repair operation, had sought to sell this site numerous times over the past twenty years. FBW has closely monitored the various proposed transactions. Fortunately, a developer withdrew his proposal in 2009 to build high-rise towers there that would have thwarted the opportunity to complete the continuous park.

In 2016, as the asking price came down, FBW urged City officials to acquire the site. Mayor Zimmer’s administration did not respond. So FBW launched a petition drive in the summer of 2017. After collecting several thousand signatures, FBW submitted the petition to the Mayor and City Council. Again, the City failed to act.

By November 2017, the stunning news broke that NY Waterway had acquired the Union Dry Dock property. Ravi Bhalla had just been elected Mayor of Hoboken and Phil Murphy had been elected Governor of New Jersey. NJ Transit was poised to buy the site and lease it back to NY Waterway to be used for refueling and repairing its diesel ferry fleet. Thus began a contentious, sometimes acrimonious battle.

Mayor Bhalla mobilized his administration to counter efforts by NY Waterway and NJ Transit. FBW was able to partner with the City and worked to enlist support from neighborhood residents, the Hoboken Cove Community Boathouse and other civic groups. In December 2017 and again in April 2018, Mayor Bhalla and the Hoboken community packed two NJ Transit Board meetings successfully averting votes to acquire the Union Dry Dock property.

The City of Hoboken threatened to take the Union Dry Dock property by eminent domain. The Governor’s office pushed back, forcing the City to back down.

NY Waterway ran ad campaigns attacking the City of Hoboken, accusing it of trying to steal its property. NY Waterway falsely claimed it was being evicted from the Weehawken site where it currently operates. That site is owned by Romulus Development whose principals own NY Waterway.

In July 2018, the Army Corps of Engineers held a public hearing on NY Waterway’s permit application. There was a full house, over 400 people, who provided hours of testimony in opposition to the application. Just a handful of speakers supported NY Waterway. On March 9, 2019, FBW organized the March on March 9 to Save Your Waterfront, with Mayor Bhalla leading the way, attended by over 400 people.

The City of Hoboken will cover the $18.5 million acquisition cost through two bonds. A $14.5 million bond will be paid off by revenue from the municipal Open Space Trust Fund created by a public initiative vote in 2007. A Memorandum of Understanding between the City and NY Waterway for the site acquisition will come before the Hoboken City Council on July 7.

FBW will sponsor a celebratory Connect the Waterfront march up to Union Dry Dock on Saturday, July 10, City of Water Day beginning at noon. All are invited to join.

Meet Phil Murphy’s inside man: The guy with access to the governor The Record 10-31-2018
Gov. Phil Murphy, Hoboken Mayor Ravi Bhalla at odds over Union Dry Dock vote – The Record 4-3-2018