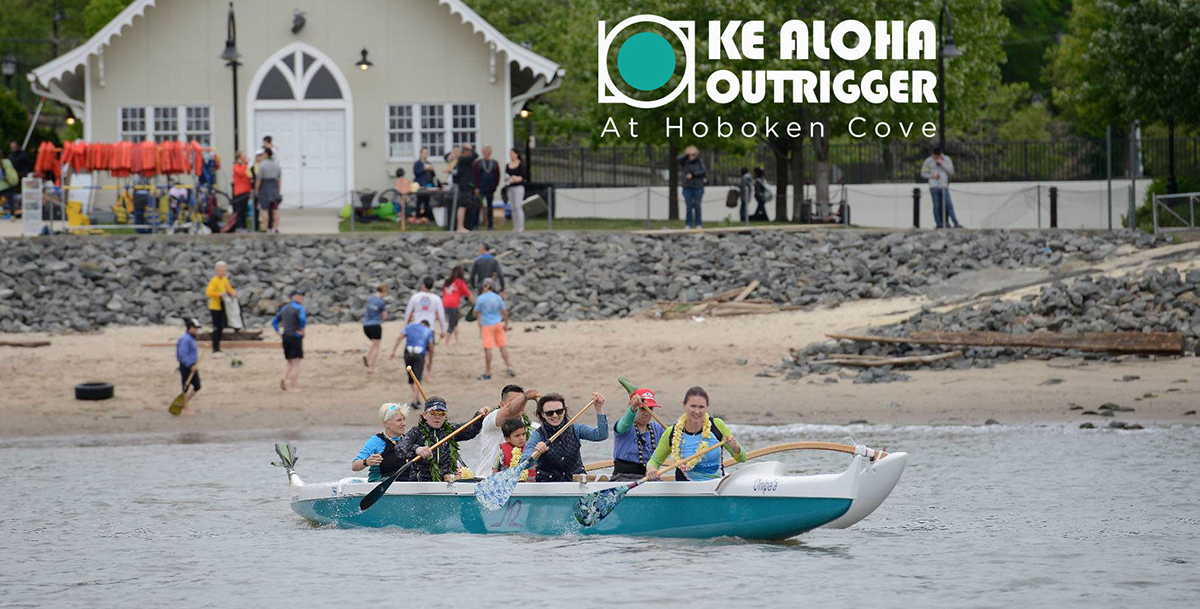 Around 200 AD, Polynesian paddlers followed the migratory patterns of birds to discover the Hawaiian islands. Their discovery was made possible by outrigger canoes. The technological innovation of the outrigger, a float projecting over one side of and parallel to the canoe, provided the stability needed to traverse the dangerous waters of the ocean. Since that time, the history of Aloha state has been inextricably tied to the ocean and outrigger canoes.

This rich tradition has now come to Hoboken, brought to us by the Ke Aloha Outrigger Canoe Club. They have partnered with the Hoboken Cove Community Boathouse in Maxwell Place Park to provide an opportunity for the public to learn and participate in this human-powered boating experience that is thousands of years old.

Ke Aloha Outrigger attracts people throughout the metropolitan region. Ilona Rayan lives in Valley Stream, Long Island, and works in Manhattan. After work during the summer, she often comes to the Hoboken Cove to participate in the Ke Aloha Outrigger programs. This is part of her heritage as she was born in Papua New Guinea in the Pacific Islands where outrigger canoeing began some 3,000 years ago. “This sport is about community and working together,” Ms. Rayan explained. “It is an opportunity to get in touch with nature and to de-stress.”

In this urban environment, the Hoboken Cove is an ideal spot for launching canoes and kayaks for it has a natural sand beach, the only one south of the George Washington Bridge along the Hudson River. When Maxwell Place Park opened in 2007, the park included a boathouse that became the home to the Hoboken Cove Community Boathouse an all-volunteer group that provides an opportunity for free kayaking to 6,000 people annually.

Currently, the future of the Hoboken Cove Community Boathouse and Ke Aloha Outrigger Canoe Club is at risk. In November 2017, NY Waterway purchased the adjacent Union Dry Dock property for refueling and repairing its fleet of 47 ferries. If allowed to go forward with its plans, there would be ferry traffic 18 hours a day, 7 days a week, producing wakes and hazardous diesel fumes. The ferries consume huge amounts of diesel fuel requiring frequent refueling. The City of Hoboken as well as civic and environmental groups throughout New Jersey have united in opposition to this incompatible activity. For thirty years, the Fund for a Better Waterfront has been working toward its vision of a public park and accessible riverfront the length of the city of Hoboken, including the 3-acre Union Dry Dock site.

On Saturday, July 27, 2019, Ke Aloha Outrigger and the Hoboken Cove Community Boathouse held their 3rd Annual Hudson River Cup and Ohana Festival. The Hudson River Cup is the first race of its kind on the Hudson. Experienced and elite paddlers competed in two races starting at the Hoboken Cove. Paddlers in outrigger canoes and surf skis raced an 8-mile course to the Statue of Liberty and back. Paddlers in sea kayaks and stand-up paddleboards traveled a 5-mile course to the Colgate Clock in Jersey City and back.

In Hawaiian, Ke Aloha, means “love is all around.” The Ke Aloha Outrigger organization describes this as love for the culture, the environment and for each other. On Saturday, the Polynesian Ohana Festival celebrated this culture and history in Maxwell Place Park with hula dancing provided by Aloha Hula NYC and Hawaiian music by Bill Wynne, winner of the Aloha Festivals Hawaiian Falsetto Singing Contest.

Newark, New Jersey, resident Naomi Morton was at the festival assisting at the Outrigger’s Arts & Crafts booth. Ms. Morton said that Ke Aloha Outrigger offers opportunities during the summer to get into the Hudson River five days a week. She took up this sport three years ago and is now a Ke Aloha Outrigger coach-in-training. Recently she paddled in one of the Ke Aloha treks, 40 miles round-trip to Sandy Hook. She has also been a strong advocate for preserving the Hoboken Cove as a public recreational space. “NY Waterway does not belong here,” she stated. “It would be replacing something that’s irreplaceable — a unique recreational opportunity.”

In addition to the Hudson River Cup and Ohana Festival, Ke Aloha Outrigger Canoe has a series of educational and training programs to teach people about its canoeing tradition. Embayment Days provide the public an opportunity to take an afternoon trip on an outrigger canoe. Its programs provide in-depth training on the paddle stroke and roles of each crew member, emphasizing the importance of athleticism, teamwork and camaraderie. The public can sign up for these programs through the Ke Aloha Outrigger website.