NJ Transit has repeatedly sought to acquire the prime real estate at Hoboken’s north waterfront — the Union Dry Dock site — for a ferry maintenance facility. This state agency first attempted this in 2012 but backed down after fierce opposition from the community and local elected officials. The NJ Transit Board of Directors was scheduled to vote to approve the acquisition in the final days of the Christie administration and again last April after Governor Phil Murphy came into office.

Again, Hoboken residents, Mayor Ravi Bhalla and other elected officials fought back and the NJ Transit Board postponed voting on the acquisition. The Union Dry Dock property, formerly a small operation that repaired barges, is surrounded by three parks: Castle Point, Elysian and Maxwell Place; the campus of Stevens Institute of Technology and thousands of residential units. In 1990, the Fund for a Better Waterfront (FBW) first proposed the concept of a continuous, public waterfront park for Hoboken and for the past two years has pushed to complete one of the final missing links at Union Dry Dock.

In November 2017, Hoboken and its elected officials were stunned by the news that the private ferry operator, NY Waterway, had acquired the Union Dry Dock property for $11.5 million. At the same time, NJ Transit announced that it would buy the site and lease it back to NY Waterway to be used to refuel, repair and store its ferry fleet. No previous discussions or notice concerning this proposed transaction had taken place between the state agency or the ferry operator and Hoboken’s local officials.

Throughout the recent controversy, NJ Transit failed to mention that it had conducted a study in 2009 entitled Ferry Berthing and Maintenance Facility – Alternative Site Analysis. The study, recently obtained by FBW through an OPRA (Open Public Records Act) request, identified five sites along New Jersey’s Hudson River coastline that were deemed more suitable for a maintenance facility than the Union Dry Dock site.

The Hoboken Train/Ferry Terminal, owned by NJ Transit, was determined by far to be the optimal location. Two Weehawken locations — the Port Imperial Ferry Terminal and the Port Imperial Marina — were ranked two and three. Ranked fourth was the Greenville Pier in Jersey City and fifth was the Bayonne Peninsula, also known as the Military Ocean Terminal at Bayonne (MOTBY). Union Dry Dock came in sixth. The remaining three sites included in the study were in Jersey City: the Morris Canal, Cross Harbor Railroad and Hugo Neu.

NJ Transit ranked each alternative by evaluating a number of criteria. According to the study, the use of the Hoboken Terminal for a ferry maintenance facility is “consistent with its transportation and maintenance functions.” While other sites could require a lengthy permitting process, NJDEP and the Army Corps permits were expected at the time of the 2009 study to be in place within a few months and detailed plans for the site had also been completed. Upon completion of the barge installation, vessel berthing capacity would be 18, far exceeding the other sites. While most of the other sites required costly dredging, no dredging would be required at the Hoboken Terminal. There would also be no land acquisition costs since the property is owned by NJ Transit.

One of the oft-repeated talking points of NY Waterway is that Hoboken’s Union Dry Dock site is the only viable location for it’s maintenance facility. NY Waterway has also gone on the attack, accusing Hoboken officials, who have sought to make the site part of Hoboken’s waterfront park system and have threatened eminent domain, of bringing the ferry operation to an end. The 2009 study, however, exposes the bogus nature of these arguments.

The fact that the study was completed nine years ago also points to the failure of NJ Transit and NY Waterway to act on its findings and secure the most appropriate site in a timely manner. There is an opportunity to do this now, thus preserving the Union Dry Dock property as public open space, something the Hoboken community overwhelmingly chooses to do.

Concerning the Union Dry Dock site, the study states, “NJDEP and Army Corps permit acquisitions are required and will be complicated by the required dredging action. It is anticipated that they will result in a lengthy construction lead-time and potentially a two year delay.” The Union Dry Dock and Repair Co. was required to dredge periodically to continue its operation, a costly and environmentally risky undertaking. The barge repair company last dredged the site in 2008. In its recent waterfront development application to the NJDEP, NY Waterway falsely claimed that dredging was not required at the dry dock site.

The study also points out that there is limited berthing capacity at Union Dry Dock and limited access to mass transit for ferry employees. The exorbitant purchase price also caused the Union Dry Dock site to rank below the five other locations. The 2009 study lists the Greenville Pier as owned by the Port Authority of New York and New Jersey and City of Bayonne, as owner of the Bayonne Peninsula.

The 2009 study also states, “NJ Transit and the Port Authority have invested more than $200 million in ferry facilities in Hoboken, Weehawken and Manhattan to provide safe and reliable ferry service.”

The copy of this NJ Transit study provided to FBW through its OPRA request redacted the cost numbers citing the need to protect “proprietary commercial or financial information . . . that would give advantage to competitors or bidders.” 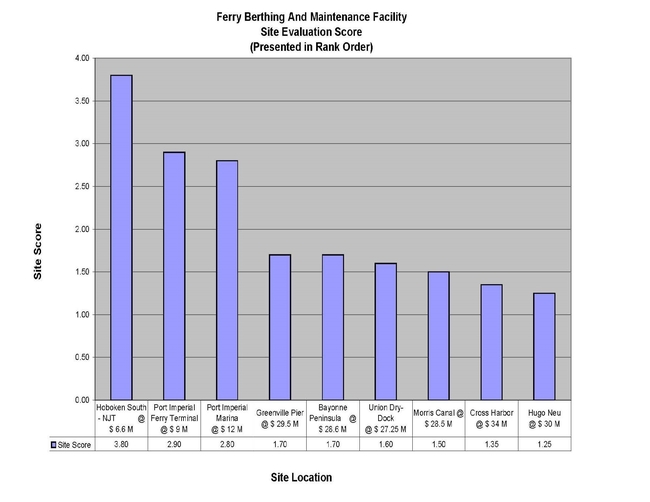 Site evaluation scores for the 9 sites studied by NJ Transit for locating a ferry maintenance facility. 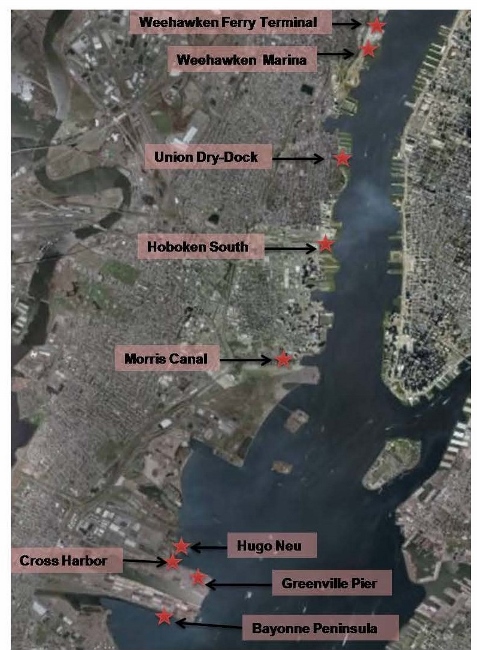 The City of Hoboken has offered to purchase the Union Dry Dock site from NY Waterway for slightly more that the $11.5 million that the ferry company paid in November 2017. As a result, Hoboken can make NY Waterway whole once the State of New Jersey and NJ Transit secure a more appropriate location for the ferry maintenance facility. The City can then move forward with its plans to connect a critical link in Hoboken’s contiguous, waterfront park.