Waterfront hotel behind Post Office would bring many benefits to Hoboken

The final vote by the Hoboken City Council on the City’s redevelopment plan for the post office site is scheduled for this Wednesday, April 19 at 7 p.m. There will be a public hearing preceding the vote. FBW is urging the City Council to approve this plan.

The 1995 redevelopment plan called for the following:

The proposed hotel, facing Sinatra Drive between Newark and First Streets, adheres to these principles. It would bring life and activity to the streetscape, replacing a grim view of the Post Office loading dock and surface parking area. There is an opportunity for a ground floor restaurant and retail space. Generous sidewalks on Newark Street, Sinatra Drive and First Street will replace non-existent or overly narrow sidewalks. Additional street trees will be planted along Newark and Sinatra.

KMS Development has had a contract with the United States Parcel Service (USPS) to do this project for the past four and a half years. Developing USPS properties has been one of their specialties and, as part of this project, they will be able to preserve this historic landmark building and its postal operation. Loading docks for postal trucks will be provided off First Street under the hotel building. KMS and its architects have also been especially sensitive to developing a project that is in harmony with the existing development at the South Waterfront and the Hoboken community.

There are additional positive features of this project as follows: 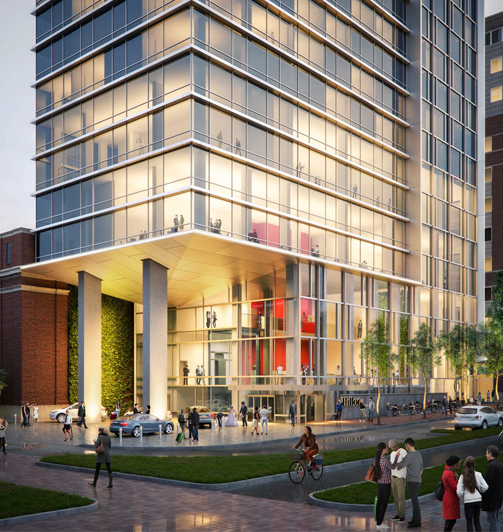 Architectural rendering of street level for the hotel proposed behind the Hoboken Post Office by Cooper Carry.

The Fund for a Better Waterfront originally proposed a development project on this very site as part of its 1990 Plan for the Hoboken Waterfront. Finally, after a 27 year wait, KMS Development along with the City of Hoboken’s newly introduced Post Office Redevelopment Plan have provided an opportunity to make this happen. Hopefully, this opportunity will not be squandered.