Hotel would vastly improve a premiere site at Hoboken waterfront

Hotel would vastly improve a premiere site at Hoboken waterfront


From Hoboken’s award winning South Waterfront, one site remains an eyesore: the rear of the Hoboken Post Office with its loading dock and parking for postal vehicles. Along Sinatra Drive and Newark Street, there is no public sidewalk. The sidewalk at First Street is so narrow as to be nearly impassable. The lively streetscape to the north with ground floor retail and front doors facing the street is nonexistent between Newark and First Streets.

For four years now, there has been a solution to this problem. KMS Development Partners has a contract with the United States Postal Service (USPS) to build a hotel. The hotel would be set back more than 20 feet to align with the buildings to the north from First to Fourth Streets. All of the public sidewalks adjacent to the hotel would be restored. Along Sinatra, additional street trees would be planted. A ground floor lobby with some retail would be built, albeit at a higher elevation to comply with the City’s new flood standards. The drop off for the hotel would be on Newark Street, just west of Sinatra, thus avoiding curb cuts along Sinatra across the street from Pier A Park.

KMS has worked with the USPS to develop several of its properties including one in Philadelphia, Pennsylvania and another in New Brunswick, New Jersey. The development of the Hoboken site would update the antiquated Post Office facilities thus allowing it to continue operating for many years to come. The parking and loading for the smaller postal vehicles would be below ground, with an entrance from River Street, just north of the Post Office building. Larger postal trucks that deliver during the early morning hours would have loading docks off First Street that are inside the facility, sufficiently deep to keep trucks from blocking the sidewalk.

The site, of course, is ideal for reducing the need for cars and parking since it is adjacent to one of the best mass transit hubs in the region, providing easy access to the PATH train, New Jersey Transit trains and buses, the Hudson Bergen Light Rail Train and New York Waterway ferries. Typical of similar hotels in the area, only 25% of the hotel rooms would require a parking space. There is already an excess of available parking in the neighborhood. The three municipal garages on Hudson Street provide over 1800 parking spaces and the underground parking for the new buildings along Sinatra Drive nearly doubles that number. The greatest demand for hotel parking, on evenings and weekends, coincides with the lowest demand for public parking. KMS has proposed off-site valet parking.

Hotels for an urban setting such as this, typically contain at least 250 rooms. Consultants to the City have proposed drastically reducing that number to a level that would make the project economically infeasible. The building footprint for the hotel is just a fraction of the building footprints for the 3 blocks to the north. Thus, instead of a massive, monolithic building that fills up a large, city-block, the hotel measures just 150 feet wide and takes up less than ⅓ of the block. KMS has proposed a building height that is compatible with the buildings to the north along Sinatra Drive. 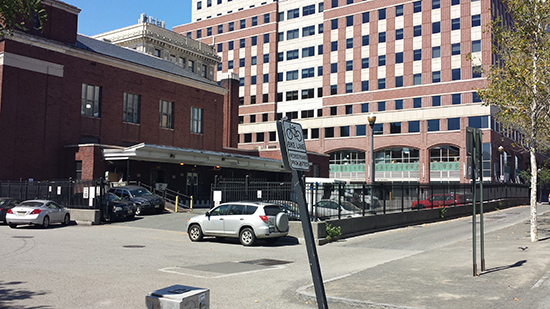 Proposal to build hotel offers opportunity to upgrade unappealing site across from Pier A Park.

The City Master Plan recommends maintaining postal services while moving the loading dock function and diversifying uses at the Post Office site. It specifically encourages hotel development in this area which is within walking distance to the nearby Hoboken Terminal and the improvement of Sinatra Drive. Further, hotels are a Principal Permitted Use in the District.

The hotel’s architecture will provide a welcome addition to the waterfront, facing Sinatra Drive and a world-class waterfront park. It will also add $1.6 million in annual tax revenues to the City’s coffers without an unpopular PILOT. The hotel will handle its own garbage and recycling and put no strain on Hoboken’s school system.

FBW’s 1990 Plan for the Hoboken Waterfront showed this parcel developed, similar to what is being proposed today. For several years, the City has failed to act despite the USPS and a developer having been ready to build. KMS and its architects have been highly responsive to altering its plan to improve the streetscape and make the project compatible with neighboring projects.

The City of Hoboken has moved at glacial pace to implement its redevelop plans, thus jeopardizing the project. If the Hoboken City Council, which also acts as the Redevelopment Authority, fails to adopt a plan for this site before the end of the year, the opportunity for it to be developed may be lost for many years to come.