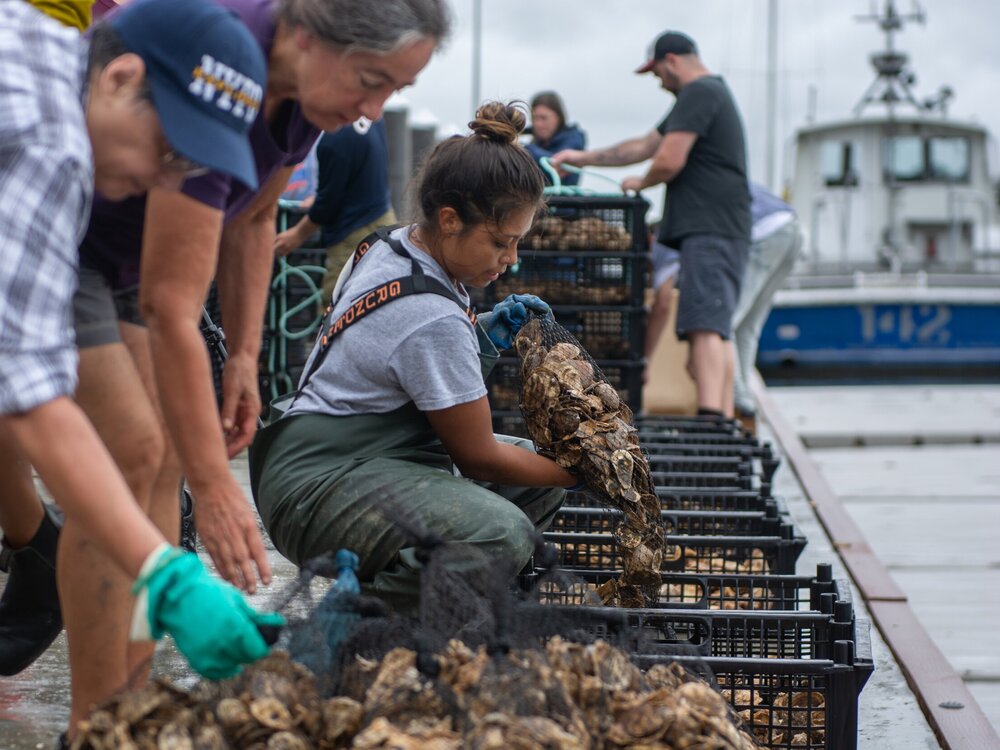 At our November 12th event, the Fund for a Better Waterfront will bestow its annual Riparian Award to the Billion Oyster Project

If you recently ordered up a plate of oysters at a New York City oyster bar, there is a good chance your discarded shells are on their way to the Billion Oyster Project’s hatchery on Governors Island. There are seventy restaurants in New York City that supply oyster shells to the Billion Oyster Project’s ambitious program to clean the waterways and revitalize the ecosystem of the New York-New Jersey estuary. How? By repopulating a billion oysters on 100 acres of reefs within the next ten years.

A single oyster can filter from 20 to 50 gallons of water a day. Like fish, bivalve mollusks breathe through their gills, collecting their food and filtering the water, thus playing a highly beneficial role in the marine ecosystem. The oyster forms its two unequal hinged shells by secreting calcium carbonate.

Like coral reefs, oyster reefs provide an ideal habitat for hundreds of other marine species. Mussels, barnacles, sea anemones and the like settle on oyster reefs, thus creating an abundant food source for fish and other marine life. The Billion Oyster Project recently found Pipefish, Pufferfish, Skilletfish eggs, crabs and a Red Beard Sponge among their fifteen recently established oyster reefs in the waters surrounding the five boroughs.

In 1609, when Henry Hudson arrived in the pristine waters of the New York-New Jersey estuary on his vessel, the Half Moon, there were 350 square miles of oyster beds. These massive reefs provided a natural defense system to protect against storms. The reefs act as buffers, and combined with the seagrass and marsh vegetation, they inhibit coastal erosion. The reefs can have a dramatic impact in reducing wave energy. After the storm surge of Sandy, with nearly all these reefs gone, this concept has been revived.

Founded in 2014, the Billion Oyster Project was the brainchild of Murray Fisher and Pete Malinowski. Mr. Fisher now serves as Chairman of its Board and Mr. Malinowski, who grew up on an oyster farm on Fishers Island, is the Executive Director. They met at The Urban Assembly New York Harbor School, a New York City public high school, where Murray was the Director and Malinowski taught Aquaculture. Both shared a vision for restoring New York Harbor’s degraded ecosystem and teaching future generations to share in their passion.

On its website, the Billion Oyster Project describes how the oysters are able to propagate:  “In the wild, young oysters — or spat — must settle on a hard surface to survive. Oyster, clam, and scallop shells provide that hard surface and are rich in calcium carbonate — making them the perfect substrate for oysters to settle on. And, thanks to New Yorkers’ lasting love for oysters, these shells are a plentiful local resource.”

So to meet its goal of a billion oysters, millions of shells are required. The BOP’s Shell Collection program is bringing in 8,000 lbs. of shells per week for seeding new oysters, which also saves tons of shells from being dumped in landfills. The shells arrive at Governor’s Island at The Urban Assembly New York Harbor School where students, staff and volunteers help prepare shells to accept oyster larvae. At the proper stage of their growth, shipping containers full of growing oysters are brought to the various sites where reefs are being formed.

In the 1800s, New York City was the oyster capital of the world. The world’s voracious appetite for oysters and the fouling of the waters, both industrial pollution and the dumping of sewage, nearly made oysters extinct in the New York Harbor by the early 1900s. The passage of the federal Clean Water Act in 1972 marked the turning point and the water quality of the New York-New Jersey estuary has gradually improved since then.

You can’t eat oysters in the New York Harbor yet. When it rains, untreated sewage still flows into the waterways. Nevertheless, in just six years, the work of the Billion Oyster Project has shown great progress, and they continue to educate thousands of students and volunteers, future stewards of our maritime environment.

The Billion Oyster Project
The NY-NJ Estuary: past & future home to a billion oysters
The Public Trust Doctrine
Plan for the Hoboken Waterfont