Stevens Institute of Technology began construction of its parking garage beneath the Babbio Center 14 years ago. The only problem was, the Hoboken Planning Board had not approved the garage, only the Babbio Center building. What followed was a contentious, often bitter battle over a number of Stevens’ waterfront development proposals. The Fund for a Better Waterfront (FBW) argued against these proposals, contending that they were ill-conceived, poorly planned and impractical. In 2002, Stevens filed suit and launched a campaign to discredit FBW. in an attempt to silence the organization.

After stop-work orders, legal wrangling and a long-controversy over blasting the serpentine rock that contained asbestos, Stevens submitted an application to the Hoboken Planning Board for a massive 725-car parking garage stretching from 5th to 6th Street along Sinatra Drive. FBW contested that application arguing that it would greatly diminish the quality of Hoboken’s waterfront and afford stellar views of the Hudson River and New York City skyline for parked cars, thus failing to make to best use of this prime waterfront parcel. By 2004, the Hoboken Planning Board approved the project.

Stevens never acted on those approvals and in 2007 unveiled a new garage proposal that responded to some of FBW’s concerns. The garage was reduced in size to 535 parking spots and was fronted with academic facilities facing Sinatra Drive, thus eliminating the bleak, exposed parking garage facing Hoboken’s popular waterfront park. The Hoboken Zoning Board approved the garage application in 2009 by granting 19 variances. FBW appealed that decision to the Hoboken City Council objecting to the rerouting of Fifth Street, a public street right-of-way through the Stevens property, and allowing Sinatra Drive to be an over-wide thoroughfare rather than a pedestrian and bicycle-friendly roadway adjacent to Sinatra Park. The Hoboken City Council failed to act on FBW’s appeal.

In September 2009, the New Jersey Attorney General announced a 16-count lawsuit against Stevens Institute President Hal Raveche and the Stevens Board of Trustees alleging financial malfeasance. A settlement reached in early 2010 forced Raveche to step down as President. After a national search, Stevens hired a new President, Nariman Farvardin who took over in July of 2011.

Again, Stevens never moved forward with the 2009 approvals to build the garage. Last October, Stevens filed yet another application for this site requesting amended site plan approval and an extension of the variances granted in 2009. This application limits the project to phase 1, completing a 436-car parking garage leaving unresolved the various issues pertaining to Fifth Street, Sinatra Drive and a building that would hopefully provide a pleasing facade fronting Sinatra Drive.

Several years ago, the City of Hoboken hired Kimley Horn, a transportation engineering firm, to develop a new plan for the waterfront from Fourth to Eleventh Street. This firm was to redesign Sinatra Drive to make it pedestrian and bicycle-friendly. After prodding from FBW, Fifth Street was included in the project. But since September of 2014, the project has stalled and Sinatra Drive from Fourth to 11th Streets remains a by-pass road with speeding traffic. The City’s failure to properly align and narrow traffic lanes now makes Stevens application for amended site plan approval for the parking garage problematic. 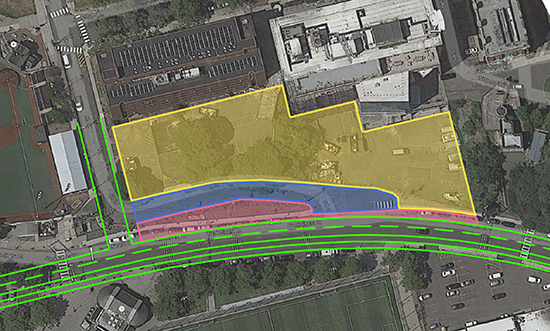 By bringing Fifth Street straight down to Sinatra Drive, following the current public right-of-way, Stevens would gain an additional 16,300 square feet of land that could be developed, on one of the most valuable, undeveloped parcels left on Hoboken’s waterfront. Image by FBW.

Since FBW was founded in 1990, it has stressed the importance of clearly delineating public street right-of-ways in order to define parcels that will be privately developed. This is a critical first step in the planning process. The last street at the waterfront, Sinatra Drive, also provides a clear separation between those upland private blocks and the public, waterfront park on the river-side. FBW has proposed to Stevens and to the City to bring Fifth Street straight down to Sinatra Drive following the mapped right-of-way that has existed since the 1800s. This greatly enhances for Stevens the value and development potential of the block where the parking garage has been proposed. (See image above.)

The issue is further complicated by the City’s failure to update its zoning code. After the City invested heavily in creating a new master plan in 2001, it failed to take the next step in revising the zoning to conform to the newly adopted master plan. When FBW appealed the 2009 Zoning Board approvals that included 19 variances, it stated in its brief:

“The Fund joins Stevens in its desire to construct a parking garage. The need for additional parking is beyond debate. But, the Fund wants the proposed garage and the Ordinance enabling its construction to be in harmony with the Hoboken waterfront. That harmony does not now exist and to the extent that the R-1(E) Zoning Ordinance was, and is, the Governing Body’s ‘vision’ for harmonious development that ‘vision’ was completely ignored by the Zoning Board’s recent decision. . . The Fund also asks that the Governing Body authorize a review of the R-1(E) Zoning Ordinance so that a parking garage may be constructed on the Stevens’ campus that is sensitive to its location along the Hoboken waterfront.”

To date, Hoboken’s Mayor and City Council have failed to respond to this request.