All are invited to the public scoping meeting for the $230 million Hudson River Rebuild by Design project to be held on September 24, 2015 from 7:00pm to 9:00pm at the Multi-Service Center, 124 Grand Street, Hoboken. The meeting is your opportunity to provide input on the project scope and priorities.

On Friday September 4, the New Jersey Department of Environmental Protection (NJDEP) released its Draft Scoping Document for the Hudson River Rebuild by Design project. This comprehensive flood mitigation program encompasses Hoboken, a portion of Weehawken to the north and a sliver of Jersey City to the south. The deadline for commenting on this document is October 9 and there will be a public scoping meeting on September 24, giving everyone an opportunity to respond, helping to shape the future development of this critical flood mitigation program.

According to the document, HUD’s $230 million block grant for this project will only cover Phase 1 based on a HUD directive from last October. The funds will be utilized for the feasibility, design and environmental analysis of the comprehensive Resist, Delay, Store, Discharge project. The implementation will give priority to the “Resist” component which consists of coastal barriers such as bulkheads, seawalls, berms and levees that would serve to avert future surges like Superstorm Sandy. The “Delay, Store and Discharge” portions of the project will be the focus of subsequent phases, assuming funding is available.

The Fund for a Better Waterfront (FBW) will be submitting comments on the Draft Scoping Document and encouraging others to do so as well. Here are some preliminary items that we are exploring:

HUD’s Rebuild by Design program was born after Superstorm Sandy engendered unprecedented flooding and destruction along the New York-New Jersey coast in October 2012. Originally, Rebuild by Design was a competition bringing together multidisciplinary teams of engineers, designers, planners, government officials and researchers in a collaborative process to formulate innovative solutions to the threat of future flooding.

On August 9, 2013, HUD selected the team headed by the Dutch firm OMA (Office of Metropolitan Architecture) as one of the ten finalists in the competition. Ultimately, HUD picked one of the OMA team’s projects originally entitled Resist, Delay, Store, Discharge: a comprehensive strategy for Hoboken to be awarded the $230 million Community Development Disaster Recovery Block Grant.

Reviewing the Draft Scoping Document can be a daunting task for the layperson. It is filled with acronyms, a complicated process and a bewildering array of federal, state and local requirements. But public review and input are also essential components. A Citizen Advisory Group (thus the acronym CAG) has been formed and is meeting regularly to provide oversight and encourage public involvement. One of the members of the Citizen Advisory Group, an environmental planner, advised the group to make sure the needs and purpose sections of the document be written correctly. I was selected to serve on this committee. 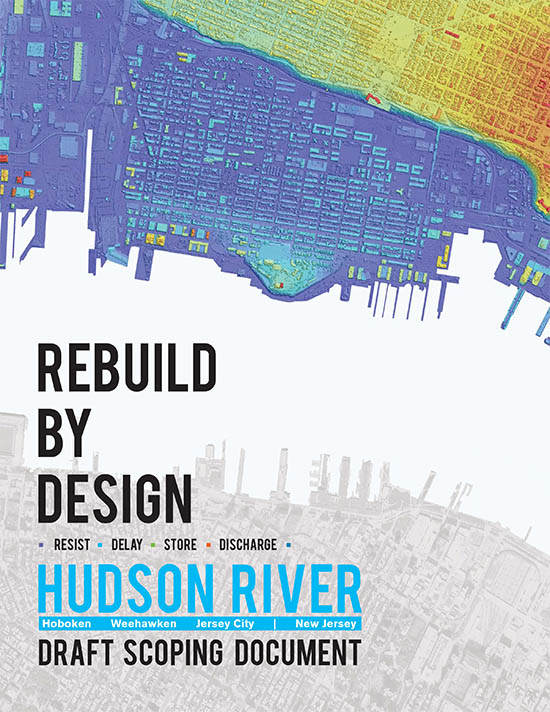 Here are some additional questions concerning the project: 1) Do stormwater-sewer outfalls not function at high tide? Don’t they include flood-gates that prevent the Hudson River waters from backing up through the North Hudson Sewerage Authority’s sewer system during high tide or if a surge occurs? 2) According to the Draft Scoping Document, the 2011 storm Irene was both a major rain event and a surge. How much of the flooding was due to the rain vs. the surge? 3) Why isn’t the Shades neighborhood in Weehawken, which experienced some of the deepest flooding during Sandy, identified as a “flooding hotspot”? 4) In addition to the new wet weather pump on Observer Highway, which can handle 50 million gallons/day, what is the capacity and function of other pump stations in the target area?

According to the Draft Scoping Document, a Stevens Institute of Technology study of superstorm Sandy estimated that 232 million gallons of flood waters breached along the Long Slip Canal south of the NJ Transit railroad tracks and 191 million gallons entered at the Weehawken Cove. Recent news report indicated that the six-acre BASF site that the City of Hoboken is seeking to acquire through eminent domain would create a stormwater storage capacity of one million gallons.

The Draft Scoping Document states that 66% of the target area falls within FEMA’s flood hazard zones. As of June 30, 2015, National Flood Insurance Program (NFIP) statistics show the City of Hoboken had 9,269 NFIP policies in place (the highest in Hudson County), with premiums of $6,734,044 (the highest in Hudson County and fifth highest in New Jersey). In addition, the overall liability to the NFIP from property owners in Hoboken was over $2 billion (third highest in New Jersey) with an average claim amount of $26,243.