Waterfront industries have virtually disappeared from Hoboken’s waterfront, save one: Union Dry Dock. This barge repair company is located at 901 Sinatra Drive just north of Castle Point and south of the Maxwell Place residential development.  Over the past ten years, various proposals have been floated for the property, but the owners have been unable to consummate a sale.

The latest suitor is Arthur Imperatore, Sr., CEO of NY Waterway. Mr. Imperatore is interested in moving his ferry maintenance and fueling station plus shuttle bus parking from the Weehawken waterfront to this Hoboken site.  The plan is to have New Jersey Transit purchase the property on behalf of this private ferry service.

In his letter, Weinstein claimed that the proposed uses conform to local zoning but it appears that the Hoboken Zoning Ordinance for this district would require a conditional use variance. In the past, however, NJ Transit has insisted that it is exempt from local zoning regulations.

Mayor Zimmer in her letter to NY Waterway and NJ Transit stated the hope of the Hoboken community that this property “would one day become open space and part of the continuous Hudson River Waterfront Walkway.”

The state and federal governments have spent over $200 million to build new ferry terminals/slips in Weehawken and Hoboken. Despite these heavy subsidies, the cost of riding the NY Waterway ferries has rapidly escalated. A one-way ride from Weehawken to mid-town Manhattan is now $9.  Same price from 14th Street in Hoboken to mid-town. 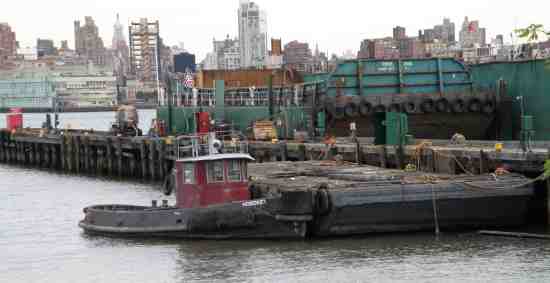 On July 18, 2012, Union Dry Dock sent out a Request for Proposals (see below) soliciting bids to purchase this waterfront property. At least two proposals were received, including one from NJ Transit.

In 2001, Stevens Institute of Technology proposed to construct a soccer field at this site, mostly built on a pile-supported platform over the Hudson River. Later, Union Dry Dock entered into a contract to sell the property for $15 million. The case ended up in court when the prospective buyers backed out of the deal and unsuccessfully sought to recoup their down payment. In 2009, a Hoboken developer, Lawrence Bijou proposed to build four 12-story towers at the site that is zoned for 2 stories. Bijou quickly backed down when community objections were voiced to the project.