The good news and the bad concerning Maxwell Place Park 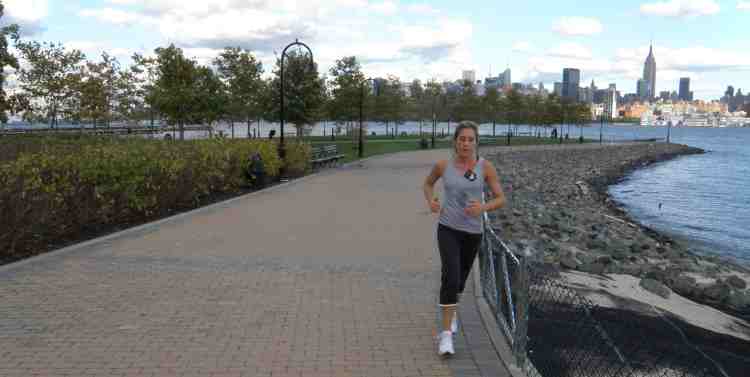 
Yesterday, Hoboken Mayor David Roberts cut the ribbon to officially open the waterfront park at Maxwell Place. What has been in the works since early 2001, prior to Roberts being elected Mayor, is now becoming a reality. The first phase of this park includes a natural beach with a public boathouse, an earthen peninsula that provides a path for the Hudson River Waterfront Walkway, and a children’s play area.

This park is noteworthy for several reasons. The fact that the developers devoted more than 1/3 of their land for a public park is unprecedented along New Jersey’s Hudson River “gold coast” where developers have sought to keep as much of this valuable land for their own use as possible. No variances or increased densities were granted to the developers in exchange for this land which now belongs to the City of Hoboken. In addition, Maxwell Place Park, which will be about five acres when completed, provides a significant addition to Hoboken’s continuous, linear waterfront park. Hoboken’s opportunity to complete this waterfront park for its entire 1.5 mile length, unimpeded by any large-scale private buildings, is now one important step closer.

The Fund for a Better Waterfront (FBW) is responsible for both the original concept of a continuous, public waterfront park for Hoboken (part of its plan for the Hoboken waterfront created in 1990) and the proposal at the Maxwell Place site to dedicate the land on the riverside of Sinatra Drive North for a public park. In 2001, after many years of knocking heads with developers elsewhere on the waterfront, FBW forged a close working relationship with the original developers of the Maxwell House property. The end result of this partnership was a plan for this site that included this public waterfront park.

A number of experts were brought in under the direction of FBW — a planner, a land conservation expert, a landscape designer, a marine engineer and an attorney — to execute the park plan for the Maxwell House site. The agreement included an estimated $9.5 million investment on the part of the developers to build the park to a standard unrivaled by any other park projects in the region. The agreement also included a commitment by the private developers for the Maxwell Place project to cover, in perpetuity, the annual maintenance costs.

Unfortunately, the park that was opened with great fanfare yesterday was not the park promised back in 2001. Once the developers decided to donate the parkland to the City, the City chose to exclude FBW from the process of creating this park. FBW had completed many months of detailed work on the park plan utilizing some of the best professional talent available. Two legal documents, a bargain sale agreement and a deed of conservation easement would have ensured that the park be constructed in accordance with this detailed landscape plan.

FBW is responsible for both the original concept of a continuous, public waterfront park for Hoboken (part of its plan for the Hoboken waterfront created in 1990) and the proposal at the Maxwell Place site to dedicate the land on the riverside of Sinatra Drive North for a public park.

But once the City took over, FBW and other members of the public were kept in the dark as the City allowed the standards for the park to erode. Concrete curbing was substituted for granite. Most of the expansive natural beach was covered with rip-rap. The number and size of trees was drastically reduced. (The FBW park design called for 67 trees for this portion of the park. This included of a double row of London Plane trees lining the walkway, similar to the landscape design at Hoboken’s south waterfront that has received much acclaim.) The quality of the children’s play equipment represents the low-end, not the high-end. There is a dearth of park benches for people to sit and enjoy the remarkable vista of the Hudson River and New York City skyline. The over-all design shows a lack of imagination and attention to detail. The opportunity to create a world class waterfront in Hoboken has been seriously diminished.