Update: The Hoboken City Council at its Monday, November 14th meeting in City Hall voted unanimously to reject the Monarch settlement after a long line of speakers opposed the deal.

The City of Hoboken is ready to sign an agreement that showers tens of millions of benefits on brothers David and Michael Barry, developers of the Shipyard Project and 800-822 Monroe Street.

If approved, the agreement would extinguish the developer’s obligation to build 1.8 acres of open space at the Shipyard Project required by the 1997 Planning Board approvals and developer’s agreement. The cost of repairing the bulkhead, restoring or cleaning up the “Monarch” pier and building the park would be transferred to the City of Hoboken. The agreement would also allow 79 additional units and provide additional profits to David and Michael Barry as redevelopers of their Monroe Street property that could exceed $20 million.

FBW consulted with a marine engineer at McLaren Engineering concerning costs and found that the settlement would relieve the Shipyard Associates from a financial obligation exceeding another $20 million, which the City of Hoboken would incur in three salient ways:

City Council President Jennifer Giattino pulled this settlement agreement from the Council’s November 2 agenda to give everyone more time to review its terms. There has been opposition to the agreement in the Third Ward, surrounding the 800-822 Monroe property (See petition from HARMED, Hobokenites Against Radical & Massive Egregious Development), and from the Fund for a Better Waterfront (FBW) which has been an opponent of the Monarch project from the beginning and has actively participated in the litigation.

Background
In 2011, the Shipyard Associates proposed to build the controversial Monarch Towers project on a pier where they were originally required to provide open space, including tennis courts, a tennis pavilion and another segment of the state-mandated Hudson River Waterfront Walkway. The Monarch project consisted of two 11-story buildings on the final parcel of the 1160-unit Shipyard Project. What has ensued is litigation on multiple fronts for the past five years.

There are four cases pertaining to the Monarch that are now before the Appellate Division of New Jersey Superior Court. The appeal of the NJDEP Waterfront Permit granted to the Monarch Project is scheduled for oral arguments in December. Oral arguments for the other three cases — appeals of questionable lower court decisions pertaining to automatic approvals, enforcement of the developer’s agreement and Hudson County rejection of the Monarch application — are likely to be heard early in 2017, all before the same panel of judges. All briefs were filed earlier this year and the court will conduct its review based on the record established in the lower court. Thus, contrary to the City’s claim, there is minimal cost to pursue the litigation pending in Appellate Court. 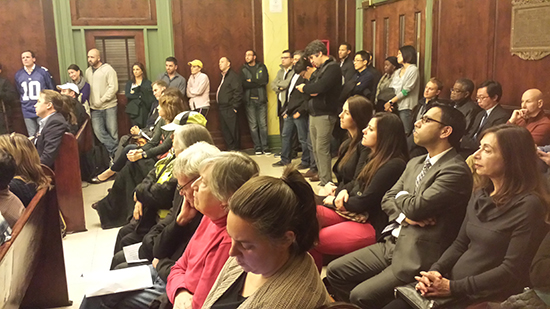 It was standing room only at the Hoboken City Council meeting on November 14. The Council defeated the proposed Monarch settlement in a 8-0 vote.

The Hudson Tea Building Condo Association (HTBCA) is a party in all five cases pertaining to the Monarch Towers. The City is a party in three of the cases. Of the two other cases, the Hoboken Planning Board is the appellant in one and the HTBCA, the sole appellant in the other. FBW is a party in two of the cases and has filed amicus briefs in two others. For many months, the City of Hoboken has engaged in negotiations with the developer without any communication with FBW or HTBCA. FBW first learned about settlement talks after seeing it last month on the City Council agenda.

In a strategy of divide and conquer, the developers are signing an agreement with the City to the exclusion of the other parties in the litigation. If the City Council approves, there will no longer be a united front and HTBCA and FBW will be forced to negotiate on their own with the developer, or in the alternative, pursue the litigation without the City.

There is a sixth case in the courts pertaining to 800 Monroe. In March of this year, Superior Court Judge Jeffrey R. Jablonski granted summary judgment in favor of the Hoboken Planning Board on all counts after the Barrys sought to get Planning Board approval without first being designated as the redeveloper for the site. Dennis Galvin, the attorney for the Hoboken Planning Board, argued in his brief that this was a case of “development by intimidation . . . attempting to bully the Board into ignoring the Law, under threat of automatic approval.” This is the same tactic used successfully by the developers in the Monarch litigation. Subsequently, the developers appealed this decision to the Appellate Division and it too is pending.