Are we devising flood remedies based on a 1,000 year storm?


Hendrick Ovink, a Dutch import and now Senior Advisor to HUD Secretary Shaun Donovan, spoke about the importance of collaboration and long-term strategic planning. Alexandros Washburn, the Chief Urban Designer for the New York City Department of City Planning, presented a series of alternate designs to floodproof his home in the Red Hook section of Brooklyn. Planner Stephen Marks outlined Hoboken’s Community Resiliency Plan that is seeking millions of dollars for sea walls, pumps plus green infrastructure. Helen Manogue, the President of the Hudson River Waterfront Conservancy, urged the creation of a task force to study the problem of long-term capital investment in the Hudson River Waterfront Walkway.

There were many other speakers at the October 8 conference that addressed sustainability for New Jersey’s lower Hudson River waterfront. The Hudson River Waterfront Conservancy and Stevens Institute of Technology sponsored this one-day conference held on the Stevens campus.

By the end of the day, the complexity of this problem proved perplexing. There are no silver bullets. The experts, in fact, often disagree on what the solutions might be. And questions abound about how the successful Dutch efforts can be applied in the States where our leaders are often adverse to long-term planning and collaboration.

Frequently, the conversations that occur during the breaks at these conferences prove the most illuminating. Philip Orton, a research scientist at Stevens Institute was not on the agenda but he attended. We chatted and he pointed out to me that Superstorm Sandy was an exceedingly rare event. Several studies concluded that Superstorm Sandy was a one in a thousand year event. A recent study that came out of NASA’s Goddard Institute for Space Studies in New York and Columbia University’s Lamont-Doherty Observatory found that Sandy’s track stands alone in the historical record dating back to 1851, and that modeling simulations showed such a track is an event that would occur about once every 714 years. This means the average annual probability of another Hurricane Sandy occurring is 0.14 percent.

Clearly, solutions to flooding problems in this region cannot be based solely on the last storm. For 30 years, I owned a property in a low-lying neighborhood in Hoboken, New Jersey. Prior to Sandy, Hurricane Irene in 2011 produced the worst flooding in Hoboken’s recent history. But this was a rain event, not a surge. And prior to that, I witnessed flooding in my neighborhood every year with some nor’easters bringing the water up to my front doorstep. All of this flooding was caused by heavy rains often occurring at high tide, causing Hoboken’s antiquated sewer system to fail.

So this raises the question of how effective seawalls will be, as has been proposed in Hoboken. They would have no impact on future storms unless we experienced another Sandy-type surge. And even then, what if the walls failed or the next surge exceeded their height. (See Philip Orton’s article: Sandy’s Staten Island Flooding Deaths: A Man-Made Disaster? – link below.) The value of sea walls vs. separating the combined stormwater/sewer system vs. stormwater retention systems or other remedies needs to be carefully weighed in light of the probabilities of different types of flooding events. Vast sums of funding could be squandered if they are not spent wisely, based on sound science.

Floodproofing at risk buildings is a critical remedy. Mr. Washburn’s exercise in designing the proper solution for his home focused on this. HUD, in fact, explains clearly wet floodproofing vs. dry floodproofing. Mr. Washburn opted for the wet version which is more affordable and allows the water to come in during a flood. Mechanical facilities are moved to higher floors and lower levels are built with materials that can withstand the impact of standing water. Mr. Washburn, concerned about how his renovation would affect the streetscape, decided to preserve his storefront space rather than convert it to a parking garage. How floodproofing is applied in an urban setting clearly deserves greater attention. Floodproofing protects during floods whether caused by surges or rain events. 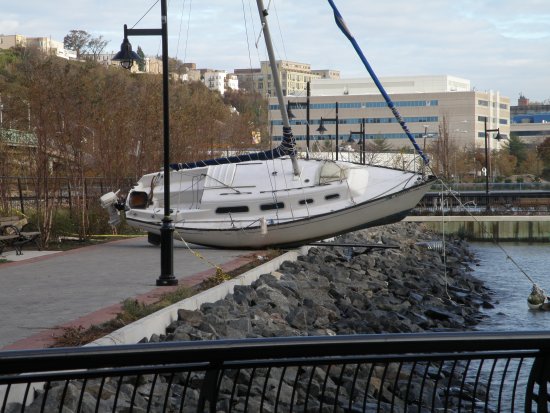 The long-term viability of the Hudson River Waterfront Walkway was a major topic at this conference yet many of the speakers failed to address key issues. In its short life, portions of this state-mandated 30-foot walk have suffered major structural damage due to the relentless currents and saltwater tides of the Hudson. During Sandy, sections of the walkway took another hit. New Jersey’s Coastal Zone Management Regulations require private developers to build their portion of the walkway as a condition of a state waterfront permit. But for both private and publicly funded portions of the walkway, the structural engineering work has proved woefully inadequate in many locations. The state’s design guidelines for the walkway fail to address structural issues. The State Department of Environmental Protection regulations also make building proper bulkheads more difficult and costly.

Since created in the 1990s, the investment of public funds in the Hudson River Waterfront Walkway has been limited. But with billions of dollars coming to the region to deal with storm mitigation, there is an opportunity to build a better walkway that also serves as a first line of defense to tidal flooding. Thus, public infrastructure can be combined with a public amenity that includes aesthetically pleasing landscape design, open space and expansive permeable land areas. Setting private development further back from the river also affords greater protection for these buildings.

Building the walkway and upland projects to the proper elevation is a key element. When Sandy hit the shores of Hoboken, the developments at the South Waterfront, Maxwell Place and the Shipyard suffered little damage due to the fact that they were built to a suitable elevation. The South Waterfront and Maxwell Place buildings are also set back from a waterfront park and a street that provides a buffer from the storm.

Another important lesson can be learned from the waterfront parks that survived Sandy vs. the ones that did not. Pier A Park held up remarkably well while the $20 million Pier C Park did not. (See: The Morning After Sandy: Hoboken’s Waterfront Parks – link below.)