On election day, voters will have an opportunity to approve amendments to the Municipal Open Space Trust Fund (OSTF) that would ensure completion of Hoboken’s waterfront park, as well as other park sites throughout the city.

Currently, the OSTF ordinance allots 2 cents per $100 of assessed property value to the fund each year, generating more than $2 million annually. For an individual homeowner with a property assessed at $500,000, the 2 cent rate means that $100 of their taxes annually goes to the OSTF.

If ballot question #2 is approved, the rate would increase to 3 cents per $100 assessed value (or $150 annually for a property valued at $500,000). This is not a tax increase but instead a change in how taxes are allocated. If the “yes” votes prevail, the OSTF annual revenue stream will increase by 50 percent and will allow for funds to be spent for construction of parks as well as acquisition. Overall, the OSTF represents about 2 percent of Hoboken’s $117 million municipal budget. As long as the City holds the line on total spending and keeps other revenue sources constant, there would be no increase in municipal taxes.

The OSTF started in November 2007, when Hoboken voters overwhelming approved the ordinance by a 10 to 1 margin. For the past 12 years, the city has used the OSTF to help acquire and build 11 acres of new public parkland, almost exclusively on the west side of town (SW Park and the BASF site, also known as NW Park). Yet Hoboken continues to suffer from a deficit of open space. The current ratio of 1 acre per 1,000 residents is well below New York City’s standard of 2.5 acres and the national standard of 6.25 to 10.5 acres per 1,000 residents.

As the residential development of Hoboken continues at a rapid clip, the opportunities to secure and develop parcels for public open space will soon disappear.

On October 3, the City of Hoboken made an offer to acquire the Union Dry Dock site for fair market value, determined to be $13.1 million. If NY Waterway, the owner, declines the offer, the City can proceed to take the site through eminent domain.

For nearly 30 years, the people of Hoboken and FBW have sought to realize the vision of a contiguous, public waterfront park along the Hudson River in Hoboken. The potential is now close at hand to complete several of the last missing links including Union Dry Dock and the Monarch pier. This is a rare opportunity that cannot be squandered. A park at Union Dry Dock would add over three acres of land as public open space along the waterfront connecting Castle Point Park to Maxwell Place Park.

This is what you will find on the November 5 ballot: 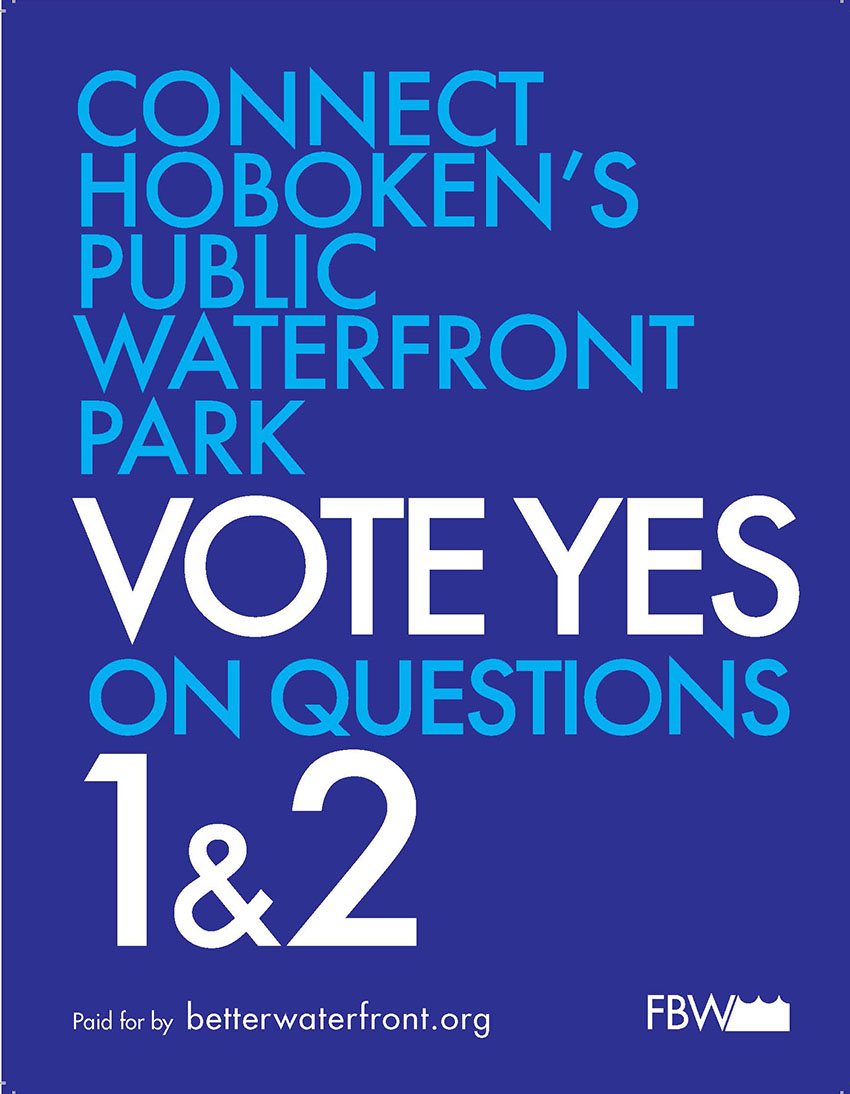