A prophetic vision for successful and failed waterfronts

A prophetic vision for successful and failed waterfronts


10/23/2014 Update: FBW honored Craig Whitaker at its Connect the Waterfront event, presenting him with the FBW Riparian Award, in recognition for his lasting impact on the Hudson River waterfront. Mr. Whitaker has guided the advocacy work of FBW through planning principles that have ensured a continuous, public waterfront park along most of Hoboken’s riverfront. This recognition has been long overdue. In accepting the award Mr. Whitaker addressed the importance of finishing the plan that was formulated some 24 years ago.

The first evening that Craig Whitaker came to Hoboken, we took a walking tour of the waterfront joined by several architects who lived in town. This was in 1990 before any development had taken place along Hoboken’s riverfront. We climbed over giant hunks of concrete and viewed the dilapidated piers and crumbling structures of Hoboken’s maritime past.

The Maxwell House Coffee Plant and Union Dry Dock were still in operation. But the Port Authority piers, Bethlehem Shipyards and Todd Shipyards were all deteriorating relics of Hoboken’s once thriving industrial and maritime waterfront. It was difficult for me to envision what this waterfront could become. Mr. Whitaker, however, had spent his entire professional career as an architect and planner understanding urban design and what made cities work.

At the end of the tour, we went to a local watering hole for a drink and talked about the Port Authority of NY & NJ/City of Hoboken plan for the South Waterfront. We explained to Mr. Whitaker that the state-mandated public walk would extend around the massive developments proposed for Piers A and C. He replied that the piers would be private. After going back and forth on this issue, Whitaker offered to come to Hoboken and give a slide lecture.

The slides consisted of successful (public) waterfronts and unsuccessful ones that remained essentially private. We saw images of the Chicago Lakefront; the Copacabana Beach in Rio de Janiero and the Art Deco District in Miami Beach, all waterfronts easily recognized as public spaces. And we saw images of waterfronts dominated by commercial interests and by private developments that found various ways to exclude or discourage the public from reaching the water’s edge.

A month later, Mr. Whitaker led the members of our group on a tour of the New York City waterfront traveling to a number of spots including Carl Schurz Park and Battery Park City in Manhattan, and Brighton Beach and Seagate in Brooklyn. We witnessed examples ranging from public parks to private, gated communities.

Our organization took to heart Whitaker’s message that the key to a successful waterfront is to map the public street system throughout the site. In Hoboken, this provided well-defined Hoboken-sized blocks for private development. The last street at the waterfront became the line in the sand separating the continuous, public waterfront park from the upland development and ensured that front doors faced the street and the waterfront park.

We won our first waterfront referendum victory in 1990 that defeated the Port Authority/City of Hoboken development proposal at the South Waterfront. That same year, we formed the Fund for a Better Waterfront (FBW) and hired Mr. Whitaker who led a team of volunteer architects, planners, engineers and landscape architects to develop our Plan for the Hoboken Waterfront. After Hoboken voters prevailed in a second referendum in 1992 (it helped that we had a plan showing a better way to develop the waterfront), the City agreed to adopt a redevelopment plan that embraced nearly all of the principles espoused by FBW.

The last parcel is now being built at Second Street between Sinatra Drive and River Street. The waterfront park has been in place now for a number of years, beautifully designed with rows of trees throughout the park and the waterfront promenade. All planning and design principles recommended by Mr. Whitaker now make this portion of New Jersey’s Hudson River “gold coast” a model for successful waterfront development. 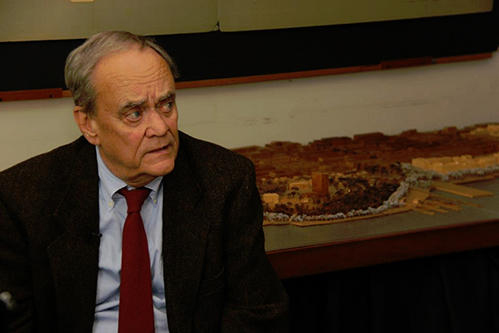 Architect/planner Craig Whitaker with model of A Plan for the Hoboken Waterfront in background.

Since 1990, we have witnessed the intensive development of New Jersey’s Hudson River waterfront. Nearly all of these projects were developer-driven. All of the municipalities save Hoboken failed to map the public streets. In Edgewater, most of the waterfront is lined with private enclaves complete with gates, fences and guard houses. There is no clear separation between people’s private back yards and the “public” state-mandated Hudson River Waterfront Walkway. The walkway can be difficult to access and certainly does not feel like a public park. For Guttenberg, West New York, Weehawken and Jersey City a grand opportunity was squandered. The slide show that Craig Whitaker gave in 1990, long before most of these projects were built, accurately predicted the failure of these projects. He was indeed prophetic.

Mr. Whitaker is the principal of Craig Whitaker Architects based in New York City. He authored Architecture and the American Dream, a book published in 1997 that analyzes American cultural values and their impact on our architecture and cities. His recent design projects include preparation of a self-sustaining reuse plan for Governor’s Island, New York, and a proposed plan for the World Trade Center site that restored some of the former street system and created a mixed-use development. For a fifteen year period, he was the principal architect of Westway in New York City, a multi-billion dollar waterfront project that, if built, would have added the most public parkland to Manhattan since the creation of Central Park. For eighteen years beginning in 1988, Mr. Whitaker, as an adjunct professor, taught urban design at the Graduate Planning Program, Robert F. Wagner School of Public Service at New York University. He received his Masters of Architecture from Yale University in 1965.