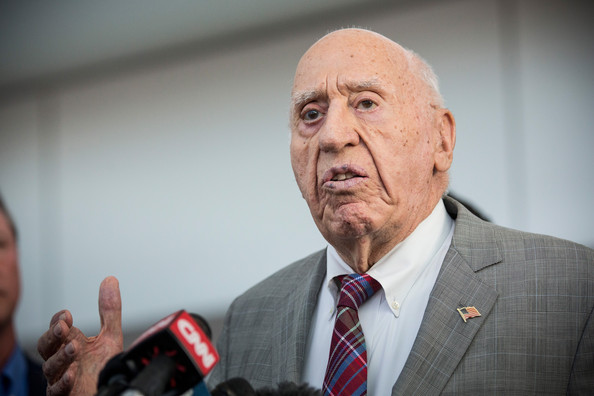 Arthur E. Imperatore, Sr. founder of NY Waterway was born in West New York, New Jersey in 1925. He rose from poverty to the Forbes list of wealthiest Americans through his highly successful trucking firm, A-P-A Transport.

Last June, the NJ Transit Board of Directors adopted its annual budget. Included was a line item, $12 million to acquire the Union Dry Dock site in Hoboken. This news, however, did not reach Hoboken City officials until November when NY Waterway announced that it had acquired the Union Dry Dock property. At the same time, NJ Transit notified the City it would purchase the land and lease it back to NY Waterway. The ferry company’s use of this prime waterfront real estate would be for diesel refueling, ferry repairs, removal of sanitary wastewater and employee parking.

Hoboken residents, with the new-found support of elected leaders, had different plans: completing one of the final missing links for a continuous, public waterfront park in Hoboken that has been in the works for over two decades. A hard-fought battle ensued, led by Hoboken’s newly elected Mayor Ravi Bhalla. People went to Trenton to petition state officials. Letters poured into the NJDEP objecting to NY Waterway’s waterfront permit application.

The next day, January 16, New Jersey’s new governor, Philip Murphy was sworn into office. He had already selected a new Commissioner of the Department of Transportation who would take over as Chair of the NJ Transit Board of Directors and soon announced the appointment of a new Executive Director for NJ Transit.

NJ Transit’s relationship with NY Waterway dates back to the 1990s, shortly after Arthur E. Imperatore, Sr. started his private ferry company. In fact, NY Waterway’s growth depended largely on tens of millions of dollars in government subsidies, in addition to a virtual monopoly it enjoyed in transporting commuters over the water to and from the New Jersey gold coast and Manhattan.

This story is very much a part of Imperatore’s story, a classic rags to riches tale. He was born in West New York, New Jersey in 1925. At the age of 10, he stated his ambition to become a millionaire. In 1947, he started his trucking company with four of his brothers after purchasing an Army surplus truck.

Imperatore conducted exhaustive time-and-motion studies analyzing every function a truck driver or dock worker was expected to perform. He instituted an unusually rigorous screening process for hiring new workers. By the 1980s, A-P-A Transport had become one of the most productive and profitable trucking companies in the country. In 1988, Imperatore made the Forbes list of 400 richest Americans.

In 1981, Arthur E. Imperatore, Sr. invested part of his fortune — $7.5 million — to buy 370 acres of derelict Hudson River waterfront property in Weehawken and West New York from the bankrupt Penn Central Railroad. He had a grand and ambitious vision to build a Venice on the Hudson with canals, townhouses, banks, schools and churches, even an observation tower inspired by Leonardo da Vinci. The price tag to build the project, dubbed Port Imperial, was an estimated $5 billion.

But his lack of experience as a real estate developer proved disastrous. He ended up losing half of his Hudson River waterfront property after falling $8 million behind on a $50 million loan. Today, Imperatore owns just 42 acres of waterfront land in Weehawken. Imperatore had to cede his vision for the waterfront to other developers.

Before losing this vast waterfront tract, Arthur Imperatore grappled with the problem of transporting its new residents to their jobs in New York City. So in 1986, he founded NY Waterway, thus reviving the cross-Hudson water ferries that had lain dormant for nearly two decades. On the first day of operation, only two dozen passengers showed up. They called it Arthur’s folly. Relying on his experience in the trucking industry, however, he pressed on.

Beginning in the 1990s, Arthur Imperatore and his son Arthur, Jr. and stepson Armand Pohan became generous contributors to political campaigns both republican and democratic. From 1990 to 2002, they donated over $150,000 to various candidates.

In 1996, the federal government provided $6.1 million in loan guarantees for NY Waterway to refinance four of its 13 boats and to add a new high-speed 400-passenger boat. In 1998, the New Jersey state legislature eliminated the state sales tax for NY Waterway, a subsidy worth millions of dollars.

In March of 2001, NJ Transit announced an agreement to purchase a waterfront parcel from NY Waterway on which to build a $44 million terminal to be leased back to NY Waterway for a 32-year period. The municipally-owned NY Waterway Midtown Ferry Terminal was built largely with public funds and opened in 2005.

After the destruction of the World Trade Center in September of 2001, the federal government provided $27 million in subsidies for NY Waterway to run ferries from Hoboken to Manhattan which later became the subject of an investigation by the U.S. Attorney’s Office. In December 2001, NY Waterway was awash in cash. Net income jumped to $5.8 million on $47 million in revenue, up from $2 million and $37 million in 2000.

But PATH train service from Hoboken to lower Manhattan was restored sooner than expected, ending these subsidies and greatly reducing ferry ridership. By 2004, NY Waterway was nearly bankrupt. There was talk of a public takeover of the system. William Wachtel of Billy Bey bailed out Imperatore by purchasing the ferry lines in Jersey City and Hoboken. In the following four or so years, NY Waterway continued to operate at a loss.

In December 2011, NJ Transit, as part of its $120 million restoration of the Hoboken Terminal, restored five of original six ferry slips that were in operation up until 1967. NY Waterway was thus provided another new ferry terminal in the historic structure formerly named the Erie-Lackawanna Train Terminal.

By the end of 2016, Arthur Imperatore, Sr. announced that he had bought back the ferry lines that he had sold to Wachtel twelve years earlier. But NY Waterway’s bid to operate the proposed New York City ferry system connecting Manhattan to Queens, Brooklyn & the Bronx was rejected in favor of the Hornblower Cruises.

Arthur Imperatore, Sr. is now 92 years old. The City of Hoboken has sought to invoke imminent domain to acquire the former Union Dry Dock property from NY Waterway. Hoboken is exploring alternate sites for refueling, repairs and other ferry operations. The future of the ferry company is an open question at this point. NJ Transit, under new leadership, is struggling to solve a multitude of problems both operational and financial. Future subsidies for NY Waterway may be postponed for years to come.