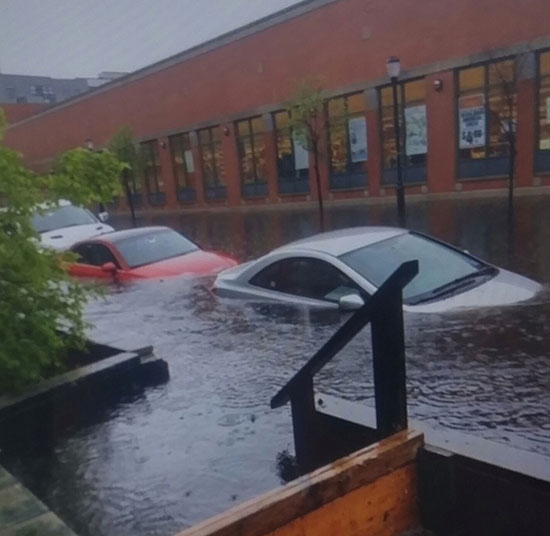 The flash flooding that occurred on May 6, 2017 surrounding the Hoboken ShopRite at 900 Madison Street was reminiscent of Superstorm Sandy.

The torrential rains that hit the region on Friday caused flash flooding in Hoboken reaching depths of several feet in low-lying parts of town. The next day Don’t Sit Home tweeted a photo of a man wading through water up to his knees: “Yesterday felt like a flashback to Hurricane Sandy in #Hoboken. Yesterday’s rain was crazy.”

The ShopRite Supermarket at 900 Madison Street appeared to be surrounded by a lake. Stores at the Monroe Center at Seventh Street reported floodwater coming up through the drains. Drivers were warned to exit Hoboken at the north end due to flooded roadways at the south. Although the two Hoboken flood pumps were operational, the three inches of rain within a several hour period overwhelmed the capacity of the pumps and collection system to remove the floodwaters in a timely manner.

Since Superstorm Sandy hit the region five years ago, Hoboken has been working hard to find solutions to the flooding problem. The federal agency, Housing and Urban Development (HUD) established the Rebuild by Design (RBD) program to develop innovative design approaches for flood mitigation in the northeast United States that was especially hard hit during Sandy.

Hoboken became a beneficiary of this project, one of just ten sites selected. OMA, the Dutch architectural firm, headed up a team of professionals that developed Resist, Delay, Store, Discharge: A Comprehensive Strategy for Hoboken.

But Friday’s storm provoked another wave of anger and questions from residents concerned whether the project is heading down the right track. The recent Draft Environmental Impact Statement for the Hudson River RBD project states that all funds for construction will be dedicated to just one strategy, the Resist component: building floodwalls to protect against a storm surge comparable to what occurred during Sandy. So, the $230 million grant from HUD for the Hoboken area is unlikely to pay for any of the Delay, Store, Discharge flooding remedies, solutions that would address the far more common flooding we experience in Hoboken.

The perennial flooding that occurs in Hoboken is due typically to non-surge storm events, and the Resist floodwalls, scheduled to be completed by 2021, would do nothing to protect against the flash flooding similar to what occurred on Friday. Nor would it provide protection against another tropical storm Irene that struck Hoboken in August 2011 resulting in unprecedented flooding. The RBD floodwalls will only protect against another surge event similar to Sandy. Tidal surges comparable to Sandy are rare events, and in fact past studies have determined that Superstorm Sandy ranged anywhere from a 100-year storm to a 1,500-year storm.

A recent scientific study published this past December in the Journal of Geophysical Research, , entitled A Validated Tropical-Extratropical Flood Hazard Assessment for New York Harbor, determined that Superstorm Sandy was a 260-year event. Dr. Philip Orton, a research scientist at Stevens Institute of Technology, along with Dr. Alan Blumberg, the director of the Davidson Laboratory at Stevens, and four other research scientists authored this study.

In light of these and other similar scientific studies, a critical consideration is this: does the excessive cost of the resist infrastructure (Alternative 3 estimated to range from $230 to $274 million) and annual maintenance (about $2 million) undermine the funding of other flood mitigation strategies that would protect Hoboken from the far more likely types of flooding caused by non-surge storms with heavy precipitation?

Similar projects in New York City have been abandoned after the City concluded that building floodwalls is cost-prohibitive. New York City has more than 500 miles of shoreline to protect. The Rebuild by Design Big U project, originally designed to build a protective system around lower Manhattan from West 57th Street down to the Battery and back up to East 42nd, is now limited to the lower east side of Manhattan which will only protect a small fraction of New York City’s shoreline. Floodwalls to protect Hunts Point in the Bronx, a vital part of the city infrastructure, will not be built due to lack of funding.

People typically cite sea level rise as the rationale for the floodwalls proposed in the Hudson River RBD project. However, in December of last year, the Regional Plan Association (RPA) published Under Water: How Sea Level Rise Threatens the Tri-State Region, which contradicts that rationale, making clear that the floodwalls will not prevent the gradual and inexorable encroachment of water into coastal areas caused by climate change.

Several engineers and public officials have stated that building the floodwalls will remove Hoboken from FEMA’s flood hazard maps. There is no logic to support such claims. Friday’s storm is a case in point where floodwalls would have been of no use in reducing or preventing the flash flooding. The need for flood insurance will continue in order to adequately protect the nearly 75% of properties in FEMA’s flood hazard areas.

Fortunately, the City of Hoboken has been developing flood prevention strategies and securing funding apart from the RBD project. These programs may actually provide the key to making Hoboken more flood-resilient and also could serve as a more cost-effective model. In December 2013, the City amended its flood ordinance and zoning code to ensure that new construction is built to a standard to withstand future flooding.

These codes require a combination of wet and dry floodproofing below what is called the Design Flood Elevation so that the new buildings will be resistant to flood damage. The wet floodproofing would actually allow the water to come into a building and then leave when waters recede without causing significant damage. This conforms to the Dutch concept of “learning to live with water.” Assisting property owners in floodproofing existing structures could provide protection in the event of both major rain storms as well as storm surges.

Much of this article is based on FBW’s comments submitted to the NJDEP concerning the RBD Draft Environmental Impact Statement. For more detailed information, read the full document.