10,000 people take to the streets and waterfront parks of Hoboken in historic protest

10,000 people take to the streets and waterfront parks of Hoboken in historic protest 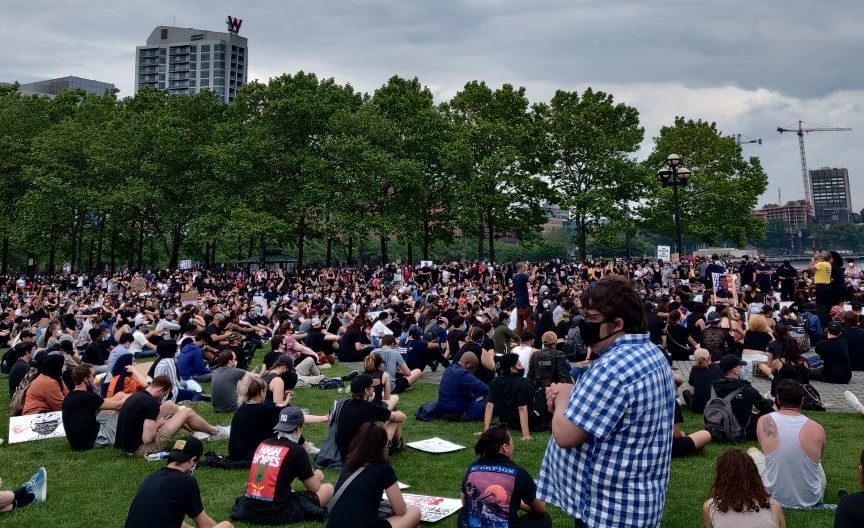 On Friday, June 6, 2020, ten thousand people took to the streets of Hoboken, beginning at Maxwell Place Park, marching along Sinatra Drive to Pier A Park, pausing in front of City Hall, then marching up Washington, west on 6th, east on 3rd, and ending for many at Pier A Park. This historic outpouring of people, organized by a new group, Allies4Justice, was part of a series of public protests that have swept across the country–and around the world–in response to the killing of George Floyd, a black American, at the hands of the police.

When people are compelled to make their grievances heard, they take to the streets, the public square and parks. Typically these spaces belong to the public and no one would question a person’s right to be there. In fact, street systems–public rights-of-way–provide the largest volume of public space in urban areas.

In the United States, a person’s right to express themselves and make their voice heard is enshrined in the First Amendment to the Constitution:  “Congress shall make no law . . . abridging the freedom of speech, or of the press; or the right of the people peaceably to assemble, and to petition the Government for a redress of grievances.” This is a fundamental tenet of our democratic system of government.

In 1990, the Fund for a Better Waterfront (FBW) put forth the vision for a park fronting Hoboken’s riverfront. FBW has stood by the principle that public parks belong to all, no matter your class, color, age or country of origin. The key is to design parks in a manner that they are clearly perceived as public spaces.

Guided by professional advice, FBW’s plan made a clear delineation between the new blocks for private development and the waterfront park. When you cross Sinatra Drive, the last street at the waterfront, you instinctively know, you have entered a public realm, a space that belongs to you.

Elsewhere along the newly developed Hudson River coastline, developers met the minimum requirement of providing a 30-foot public walkway. The walkway in Jersey City, Weehawken and all the way up to Edgewater, typically abuts private development without a public street system to clearly separate the public from private areas. It is hard to imagine a public demonstration, especially of this magnitude, taking place on those waterfronts.

Recent events echo back to the 1960s when riots broke out across the country in communities of color in Los Angeles, Detroit, Chicago and Newark. A commission appointed by President Lyndon Johnson in 1967 found that poverty and institutional racism, not outside agitators, were the root cause of the uprisings. The report detailed oppressive policing practices, a flawed justice system, inadequate housing, high unemployment, unequal education and voter suppression among the causes. It concluded that our country was poised to fracture into two radically unequal societies — one black and brown, and the other white. Some of us are old enough to remember those turbulent times and the events of the past few weeks were a sobering reminder of how much we have failed some fifty years later.

Writing for CityLab on August 13, 2012, Emily Badger asks the question: “What Makes a Public Space Good for Democracy?” Friday’s massive march and rally showed that Hoboken’s Hudson Riverfront park passed the test. In addition to recreation, picnicking, sunbathing and other typical park activities, this waterfront park is also a place to exercise one’s democratic right to protest.