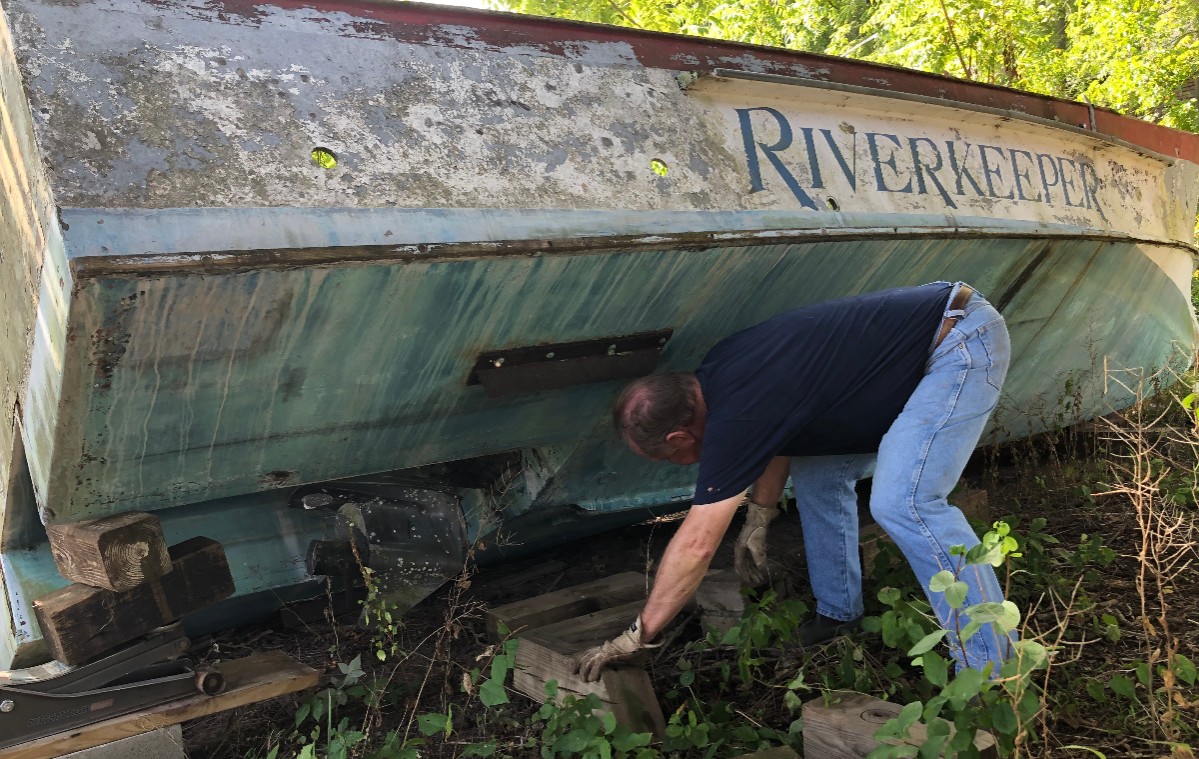 The original Riverkeeper boat launched in 1983 recently recovered in the woods of Garrison, New York.

At its annual Connect the Waterfront event at the Hoboken Elks Lodge, FBW honored the Hudson River Fishmen’s Association with its 2019 Riparian Award.

The Hudson River Fishermen’s Association began in 1966 when a group of commercial and recreational fishermen, including a Sports Illustrated writer named Bob Boyle, organized to combat the industrial pollution they witnessed contaminating the Hudson River. Boyle uncovered two obscure laws, the Rivers and Harbors Act of 1888 and the Refuse Act of 1899, that prohibited the polluting of American waters; the laws not only fined polluters but provided a bounty to those reporting them.

The fishermen resolved to find and prosecute polluters, and within a few years had won several cases that allowed them to build a patrol boat and hire John Cronin as the first Riverkeeper. In 1983, aboard the Riverkeeper, Cronin began patrolling  the Hudson River. In a September 9, 1984 article in the New York Times, he stated, “I have a boat. My job is to investigate the bad and keep track of the good and to try to come up with solutions to problems. I lobby. I patrol. I fish. I do public speaking. I do investigations. I work with scientists, attorneys and politicians.”

Shortly after the launch of the Riverkeeper, Cronin was tracking Exxon’s oil tankers that were making over a hundred trips up the Hudson to remove fresh water. After navigating his boat beside the tankers, he took samples and discovered that Exxon was discharging saltwater contaminated with benzene, toluene and other petro-chemical toxins, directly into the Hudson River. In an April 1984 settlement, Exxon agreed to pay $500,0000 to the HRFA and later, $1.5 million to the State of New York. The HRFA continued to win cases against major industrial offenders, including Penn Central Railroad, Standard Brands, Ciba-Geigy, and Anaconda Wire and Copper.

This was the beginning of what became a world-wide waterkeeper movement. Today, over 340 waterkeeper groups patrol the waterways in 46 countries. The Waterkeeper Alliance is the largest and fastest growing nonprofit solely focused on clean water, with the goal of ensuring “drinkable, fishable, swimmable water everywhere.” Our own local waterkeepers include the Hudson Riverkeeper, the Hackensack Riverkeeper, the NY/NJ Baykeeper, Long Island Soundkeeper and the Delaware Riverkeeper.

Today, the HRFA remains a vital and active organization. They  sponsor regular sport fishing activities, advocate for public access to the Hudson River, and with their popular youth angler program, educate a new generation of Hudson River stewards. This past November 3rd, the HRFA held a fishing event at Hoboken’s Castle Point Pier, a spot well known as the place to catch trophy striped bass in the Fall.

The HRFA continue to monitor and promote the health of the Hudson River. On March 9, they showed up in force to join the Fund for a Better Waterfront and over 300 people who marched up the Hoboken waterfront in opposition to the proposed ferry refueling and maintenance facility at the Union Dry Dock site, just 100 feet from the Castle Point fishing pier.

Having rescued John Cronin’s original Riverkeeper patrol boat from the woods, the HRFA has launched a project to restore the vessel  so that it may once again navigate the Hudson, educating and inspiring a new generation of river advocates. The group is seeking volunteers — boatbuilders, carpenters, electricians, plumbers and others — to help with the project. For more information: HRFA. To contribute to the cause, checks can be made out to “HRFA Boat Restoration Project” and mailed to HRFA, P.O. Box 421, Cresskill, New Jersey 07626.