In 1997, the Hoboken Planning Board granted approvals for the 1160-unit Shipyard project, a planned unit development on prime real estate at Hoboken’s northeastern waterfront. Shipyard Associates also signed a developer’s agreement with the City of Hoboken. The approvals and the agreement clearly stipulated that the final parcel, Block G, be built as open space.

In 2011, Shipyard Associates reneged on the agreement and disregarded the conditions of approval by proposing to build the Monarch Towers, two high-rise buildings at Block G on a pier over the Hudson River. The litigation that has ensued for the past five years is now before the Appellate Division of New Jersey Superior Court as well as U.S. Federal Court. Block G continues to deteriorate into the river blighting a portion of Hoboken’s waterfront that is surrounded with luxury residential development.

The appeals of questionable lower court rulings that favored the developer have been briefed by the City of Hoboken, Hudson Tea Building Condo Association, the Fund for a Better Waterfront (FBW) and defendant Shipyard Associates. The Appellate panel is not likely to hear oral arguments for a number of months.

The appeals of the three lower court rulings were filed separately but are being heard by the same panel of judges. On February 3, 2016, FBW filed an amicus brief in the case where lower court Judge Nesle Rodriguez granted automatic approvals for the Monarch project. Attorney Renee Steinhagen, Executive Director of the New Jersey Appleseed Public Interest Law Center, representing FBW, argued that default approval is not appropriate when a planning board denies an application in a timely manner. The record also showed that the developer’s application was not in fact complete at the time of the hearing and likely required a variance request. The project also raised questions about putting the public’s welfare at risk by building in FEMA’s Coastal High Hazard Zone. A copy of this brief is listed in the links below.

The other two cases before the Appellate Division pertain to the City suit to enforce the 1997 developer’s agreement and the County Planning Board’s denial of the Monarch application. 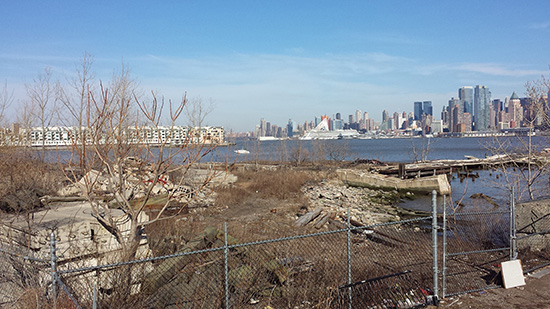 Shipyard’s Block G, a blight on the neighborhood, and a reminder of a broken agreement to provide open space.

The Shipyard Associates filed suit in federal court in an attempt to void Hoboken’s amended flood ordinance that prohibits building residential or commercial buildings on piers over the Hudson River. After losing several motions before the federal magistrate, Shipyard Associates filed a motion to withdraw this suit, so they can refile in state court seeking a more favorable venue. The federal court has not yet ruled on this motion.