Recent controversies swirling over the Christie administration’s involvement in pushing a mega-development in Hoboken have focused attention on one of the last frontiers for redevelopment in this mile-square city. The North End Redevelopment Area is a 19-block portion of town that is currently zoned for industrial use and is one of the few neighborhoods that has been largely untouched by Hoboken’s development boom. It is the entrance to Hoboken at the north end of town, just south of the Lincoln Tunnel. This site fronts the Weehawken Cove along the Hudson River. This underutilized land provides an opportunity to create an exceptional gateway into the north end of town and a new development that reflects Hoboken’s best urban attributes.

Hoboken’s renaissance began in the 1970s with the restoration of brownstones and other properties built at the turn-of-the-century. These buildings have provided the town with its remarkable architectural heritage and neighborhood ambience. By the 1980s, real estate developers were filling up empty lots and former industrial areas with new construction. Hoboken is ideally located along the Hudson River at its eastern border with the Palisades Cliffs to the west. It sits directly across from Manhattan with easy access via mass transit. These features sparked a red-hot Hoboken real estate market. Developers dubbed Hoboken the sixth borough of New York City.

This gateway redevelopment area highlights the need for a vision and well-reasoned plan to rebuild. The vision should be guided by the qualities that make Hoboken such a successful urban community. Hoboken’s turn-of-the-century buildings were typically three to five stories in height, very much a human scale. Front doors and windows faced the street, abutting front lot lines at the perimeter of each block. Rows of buildings circled these blocks making for the dense urban character. The footprints for these buildings typically covered the front 50 percent of the lot, leaving a backyard at the rear that connected to all the others, a quadrant of open space at the interior of each block. Ground floor retail exists throughout much of town, making shopping possible via a short walk rather than driving one’s car to a shopping center.

Although much of Hoboken’s urban, human-scale character has remained intact, there are some exceptions. In the 1960s, blocks of historic buildings were razed to make way for Church Towers and Marine View Towers. These projects followed the failed “tower-in-the-park” concept, with tall buildings set back from the street surrounded by private open space that is devoid of life. Some of the more recent residential development in the formerly industrial northwest portion of town is more in keeping with Hoboken’s scale and character but is marred by the ground floor parking, frequently exposed at street level. Also, much of the architecture is rather monotonous, lacking the remarkable variety found on most Hoboken streets.

Last year, walkscore.com designated Hoboken as the nation’s most walkable city. It is one of the characteristics that residents most appreciate and enjoy. Only 20 percent of residents own a car. An estimated 56 percent of Hoboken’s working men and women commute via public transportation using easy access to trains, buses, light rail and ferries. This is a feature that needs to be replicated at the North End Redevelopment Area.

Mixed use development promotes walkability and lively neighborhoods. Thus, the development needs to provide for a good mix of residential, retail and office. The North End is best suited for a predominantly residential development. The Hoboken Master Plan completed ten years ago supports this concept, stating, “Any new development in former industrial areas in the western section of the City will take the form of residential neighborhoods, not isolated buildings, that boast shopping at the transit stops and mixed-use development.” The failure of the strictly commercial development project at Lincoln Harbor, just north of Hoboken in Weehawken, should serve as a warning. This Hartz Mountain project began in the 1980s but later stalled. Only recently have the developers finally opted to add a residential component. 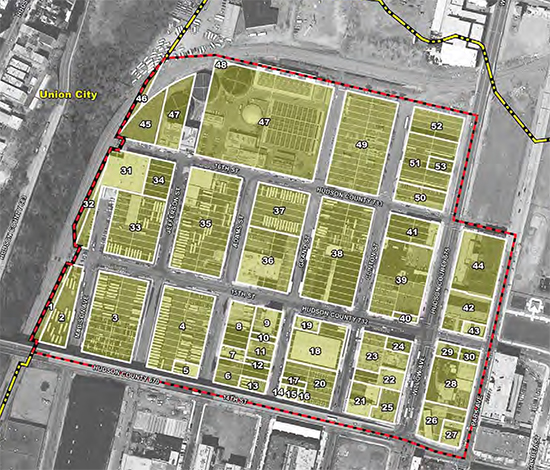 The North End Redevelopment Area also must contend with traffic backups at the Lincoln Tunnel during rush hours. Transportation experts have expressed concern that an over-sized commercial project would have a negative impact on Tunnel traffic. Vehicular traffic is restricted to just a few routes of ingress and egress. Fortunately, New Jersey Transit has committed to building a new light rail station at 17th Street and Clinton, thus adding a vital public transportation asset to this neighborhood.

Based on recently revised FEMA maps, over 70 percent of Hoboken is now in a flood zone, including this site. The project will thus have to conform to new standards to build in that zone. This will create some additional challenges for creating an appealing ground floor for new buildings and for promoting a lively streetscape. Retail uses that have been wet flood-proofed could become one of the standards. The project will necessarily include other flood mitigation measures that are now being offered up by one of the HUD Rebuild by Design teams putting together a comprehensive plan for the Hoboken area.

Fortunately, at the north end of town, the Hoboken street grid is still in tact. So this vital first step in the planning process is already in place. Last year, the City declared this 19-block site an “area in need of rehabilitation” and will soon hire a planning firm to develop a plan.

The Rockefeller Group initially proposed a 40-story tower as part of their 2 million square foot project. Hoboken has had a number of similar shoot-for-the-moon development proposals over the past 30 years resulting in contentious battles. Civic organizations have played a central role in defeating most of these type projects. The recent controversy over this project has centered on efforts by lobbyists at Wolff & Samson, closely tied to Governor Christie, and the Christie administration itself pressuring Hoboken officials to move this project forward. The Rockefeller Group has since severed its ties with Wolff & Samson.

Hopefully, this will not be a developer-driven project but will be designed to best serve the interests of the community as a whole. The City needs to put into practice the best thinking available in urban design and planning. The building standards and over-all plan must be raised to a standard that fully realizes the opportunity presented.