April 2, 2020 – Yesterday, the Federal Transit Administration and New Jersey Transit extended the comment period beyond the March 31 deadline. Please provide your feedback via this brief City of Hoboken survey. A virtual online public meeting has been scheduled tentatively for April 16. Additional information is provided on the City of Hoboken website. 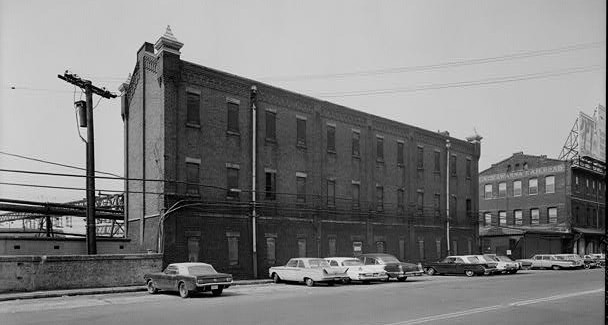 The Record Building, a unique, historic structure sitting parallel to the train tracks and fronting Observer Highway between Washington and Hudson Streets, could be facing the wrecking ball. The New Jersey Department of Community Affairs has declared the Record Building an “unsafe structure.” The State Historic Preservation Office has required New Jersey Transit to conduct an analysis of alternatives on the proposal to demolish the structure.

At the turn of the century, the Delaware Lackawanna and Western Railroad undertook its rail yard improvement campaign. The architect Frank J. Nies created a sophisticated and distinctive design for the Record Building, built in 1904, that today is the oldest existing structure in the historic Hoboken Terminal Complex. Three years later, the main train and ferry terminal were built, an extraordinary example of Beaux-Art style architecture. The terminal has a distinguished copper-clad facade with ornate detailing. The interior includes a series of Tiffany stained-glass skylights among many other distinctive features.

The terminal is recognized as a milestone in transportation development in the United States, and it originally combined rail, ferry, subway and streetcar service. The streetcar, of course, no longer runs but light-rail and bus service have been added. Today, 50,000 commuters use the Hoboken Terminal each day.

The Hoboken Train and Ferry Terminal is a national treasure protected by its listing on the New Jersey Register of Historic Places and the National Register of Historic Places. For the past twenty years, New Jersey Transit has worked to preserve and restore these buildings guided by Beyer Blinder and Belle’s Hoboken Terminal & Yard Preservation Plan completed in 1999.

The Preservation Plan details the unique features of the Record Building. Nies, the building’s architect, offers stylistic references to English Victorian Gothic Revival architecture with the articulated red brickwork and fanciful cornice and roofline. The turrets at the four corners of the rooftop are clad in copper. The building has features that are drawn from medieval fortress architecture: ground story windows are covered with heavy iron grills and iron shutters, and the narrow windows and doors contain rusticated lintels and stone sills.

New Jersey Transit scheduled a public hearing for March 17 that was cancelled due to the COVID-19 crisis. Repeated requests by the City of Hoboken to postpone the March 31 deadline for comments were finally granted on April 1.

The City of Hoboken, Hoboken’s Historic Preservation Commission, the Quality of Life Coalition, Fund for a Better Waterfront and Responsible Development Task Force have all sought to preserve and adopt for reuse the Records Building. The building’s location is problematic due to the imminent construction of the Rebuild by Design floodwall directly behind and the North Hudson Sewerage Authority pump station in front. Adding to these problems, the perilous state of the building’s structural integrity has led New Jersey Transit and others to recommend “Alternative 5: Relocation/Reconstruction.” (See the Lackawanna Records Building Project – Draft Alternative Analysis page 21 for details.)

The past three administrations have struggled to establish a Hoboken Rail Yard Redevelopment Plan on ten underutilized acres of this New Jersey Transit property stretching from the bus terminal above the PATH Station and to the west along the south side of Observer Highway. Since 2012, all of the redevelopment plans have called for the preservation and restoration of the Record Building.