Superior Court Judge Nesle A. Rodriguez ruled yesterday that the Shipyard Associates application to build the Monarch project, two high-rise towers on a Hoboken pier, is automatically approved. The judge based her decision on the Hoboken Planning Board’s failure to hold a hearing on the merits of the case within the legally defined timeframe. “The Planning Board’s complete disregard of its statutory duty to hold a hearing on the merits constitutes a failure to act,” Judge Rodriguez wrote.

Last summer, Superior Court Judge Arre threw out an attempt by the City of Hoboken to enforce a 1997 developer’s agreement that stipulated Shipyard Associates would create open space, including tennis courts, a tennis pavilion and a section of the Hudson River Waterfront Walkway on this site. The City appealed part of that decision but it was assumed that the case would eventually return to Hoboken Planning Board for a hearing. Other legal issues related to this project, including the denial of the application by the Hudson County Planning Board, are yet to be resolved in the courts.

Since the Monarch application for a waterfront permit was first submitted to the New Jersey Department of Environmental Protection (NJDEP) in May of 2011, FEMA’s flood maps have been revised putting the project squarely within the “Coastal High Hazard Zone.” New projects in this most vulnerable flood area must be built to higher elevations (elevation 16’ in this case) and during storms allow for the waves and debris to pass underneath the structures unimpeded. Current plans for the Monarch do not meet these new standards. The new Coastal High Hazard Zone designation also puts in effect the state’s Coastal Zone Management regulation Section 3.18 that prohibits multi-family residential buildings and hotels in that FEMA highest-risk flood area. Recently, the Hoboken City Council amended its flood ordinance to include a provision that prohibits building on piers.

The Mayor has pledged to appeal the judge’s decision. The prohibitions imposed by the State and the City and the new FEMA standards will also provide new lines of attack for lawyers representing opponents of this controversial project. The Hoboken Mayor, the City Council, the Hudson Tea Building Condo Association and the Fund for a Better Waterfront have all opposed this project from the start, challenging the NJDEP’s waterfront permit, going to court to enforce the 1995 developer’s agreement and opposing the Monarch application before the Hoboken Planning Board and Hudson County Planning Board. 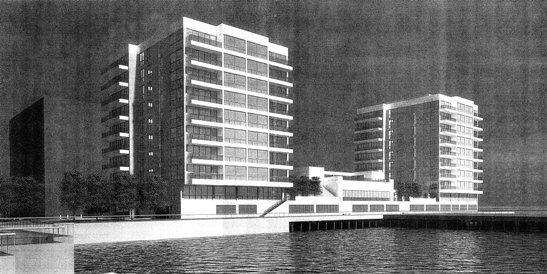 In 1997, the Hoboken Planning Board granted approval to the Shipyard Associates to build 1160 residential units at the northeast corner of Hoboken, a prime piece of waterfront real estate. In 2011, the developers completed the final units of this project and then submitted the Monarch application to build 78 additional units in two high-rise towers on a pier at the north end of their project. The original approvals for this planned unit development in 1997 designated this pier as open space.

In March of 2012, the City of Hoboken, represented by the law firm Maraziti, Falcon & Healey of Short Hills, New Jersey, filed suit against Shipyard Associates charging breach of contract and seeking a declaratory judgment upholding the 1997 agreement. Attorneys representing the Hudson Tea Building Condo Association and the Fund for a Better Waterfront intervened in the case as plaintiffs. On June 21, 2013, Judge Arre denied plaintiffs motion for summary judgment.

Prior to being assigned to the Civil Division of New Jersey Superior Court in 2013, Judge Rodriguez served as a Family Court judge and before that a municipal judge in Jersey City.