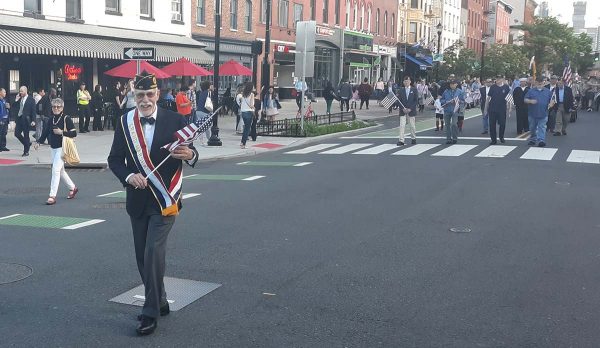 
Anyone who has spent time with Jim Vance, especially over drinks at a local watering hole, is likely to be familiar with his war stories told with great excitement, all these many years later.

In 1963, Jim graduated from the U.S. Army’s Officer Candidate School as a 2nd Lieutenant and was sent to Vietnam as a field artillery officer. After a year, he went to flight school and returned to Vietnam commanding an armed helicopter gunship fire team. He logged 1600 hours of combat flying time, leaving the Army in 1969 having attained the rank of Captain.

Mr. Vance is the most decorated veteran at the Hoboken American Legion Post 107. He is the recipient of a Distinguished Flying Cross, the Purple Heart, Bronze Star, and the Air Medal with 24 Oak Leaf Clusters. While most servicemen served one tour of duty, Jim, always zealous in whatever he does, served two.

This Wednesday’s 121st Annual Hoboken Memorial Day Parade is the oldest continuously held parade in New Jersey. It will be led by the Fund for a Better Waterfront’s own Jim Vance who will serve as the Grand Marshal.

Jim joined the Board of the Fund for a Better Waterfront in 2004 and has served as Chair for the past twelve years. He is by far the most generous contributor to this nonprofit organization and has been a tireless advocate for the cause.

Jim had a highly successful career brokering used business jet aircraft. Being a natural salesman, he got started in this business in 1977. Ten years later, he joined in partnership with Rick Engles and they formed Vance & Engles Aircraft Brokers. The two became well known in the industry for being fiercely competitive. He retired in 2008.

Jim Vance is well-known for his many passions. He helps to save Hoboken’s sidewalk trees by removing the ties that would otherwise strangle the tree. On occasion, he advocates for complete-streets concepts at city council meetings. Jim, who does not own a car, can be seen cycling wherever he goes in Hoboken. He rides on many of the Bike Hoboken tours. He is also a member of New Jersey Bike & Walk Coalition. Any server who brings him water with a plastic straw will get a lecture about how plastic pollutes our environment.

When he returned from his final tour of duty in 1968, Jim became involved in the peace movement. When asked why, he replied, “I spent two years over there, and if I can’t win it, nobody can. It is time for the troops to come home.” “In truth,” he says “our leaders were lying to us.”

He received his bachelor’s degree from Boise State College in business administration but had a reputation for partying and spending most of his time on the nearby Idaho ski slopes. He returns to the western slopes for skiing most winters and still loves a good party.

Jim’s father was a colonel in the U.S. Army, so his life began as an Army brat. His family was stationed in Germany, Virginia, Florida and various other parts of the world.

Memorial Day, of course, commemorates the people who lost their lives fighting for the United States in the various wars. Hoboken lost 28 military personnel in World War I, and an astounding 163 soldiers, sailors, marines and airmen in World War II. Three died in the Korean War and nine in Vietnam.

“Please attend the parade,” Jim urged, “and during Memorial Day weekend, take time to remember and reflect as you enjoy the beginning of summer.”