“Allowing new construction on a pier in a coastal high hazard area as this bill provides contravenes that federal regulation and may therefore jeopardize (National Flood Insurance Program) eligibility for those municipalities with existing piers along the Hudson River,” the governor noted in his veto message. “I cannot condone such a risk.”

The Fund for a Better Waterfront and the Hudson River Waterfront Conservancy actively fought against A-3933 and S-3680 as did a long list of New Jersey environmental organizations. Hoboken Mayor Dawn Zimmer publicly denounced the legislation and requested that Hoboken be exempted from the bill. Hoboken’s Assemblyman Ruben Ramos was one of the few legislators to speak out and vote against the bill as well.

Erika Spanger-Siegfried of the Union of Concerned Scientists praised Gov. Christie for the veto. “Governor Christie did the right thing today,” she wrote in a statement. “He demonstrated leadership by putting the safety and welfare of New Jersey residents and the long-term viability of coastal communities ahead of narrow short-term economic interests. This decision puts common sense and pragmatism above politics and special interests.”

On June 27, 2013, the New Jersey Association for Floodplain Management (NJAFM) wrote Governor Christie recommending a veto due to the bill’s inconsistencies with building codes and the National Flood Insurance Program. The letter stated, “NJAFM is especially concerned about resulting infrastructure damage, public safety and safety of first responders in attending to evacuees, if development is permitted in the FEMA Flood Insurance Rate Map V-zones. NJAFM strongly suggests that permitting more high risk development is not an appropriate response to New Jersey’s flood history.”

FEMA designates this area with the highest risk of flooding because, in the event of a tropical storm like Sandy, there is a high probability of breaking waves and a destructive combination of tidal and wind-induced storm surge. The newly revised FEMA flood insurance maps has put the entire Hudson River coastline, including piers within the Coastal High Hazard Zone.
[/fusion_text][/fusion_builder_column] 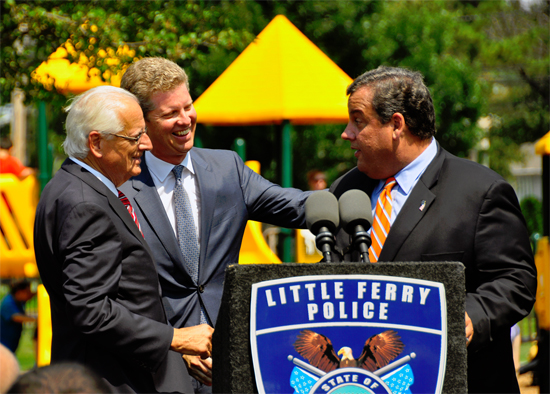 [two_third]
At a June 10th hearing before the Assembly Environment Committee, a long list of speakers spoke out against the legislation. The one person speaking in favor was Steven Corodemus, a lobbyist from the law firm of Giordano, Halleran & Ciesla and a former eight-term N.J. Assemblyman. He made reference to his client, a developer at Lincoln Harbor in Weehawken, N.J. Although not directly named during the hearing, Hartz Mountain Industries has served as the sole developer of these sixty acres of prime waterfront real estate.

During the hearing, the first speaker Donald Stitzenberg gave a personal account as a property owner who lives on a pier – Riva Pointe, a Hartz project at Lincoln Harbor in Weehawken. He testified that the National Flood Insurance Program will not insure properties built over the Hudson River. Since Sandy, private insurers have declined to insure the 245 units at Riva Pointe as well. Stitzenberg related the harrowing tale of what it was like for the residents of this pier project during the night that Sandy hit. The waters had completely surrounded the development, cutting them off from emergency personnel. An elderly woman residing at Riva Pointe suffered a heart attack and had to be rescued. Only after an inflatable pontoon was brought in by emergency workers through four feet of water, could the woman be taken to the hospital.

NJAFM: Request to Veto S2680
Senator Sacco’s bill would put people in harm’s way
S2680 and A3933: What you need to know
Monarch Towers now in FEMA’s Coastal High Hazard Zone
A serious conversation about Sandy
Flood insurance rates will skyrocket
79% of Hoboken falls into FEMA’s flood zone
Post Sandy: After repairing the damage, then what?
12-Point Plan in preparation for the next Sandy