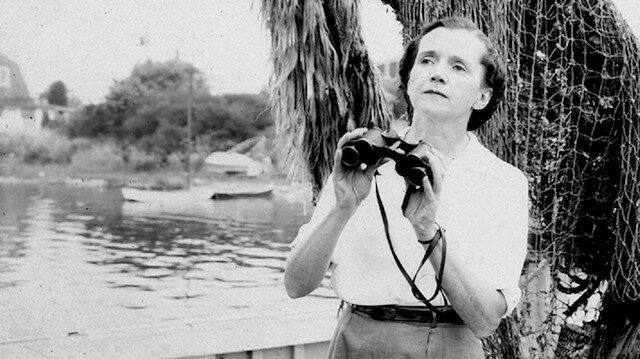 For Earth Day 2020, the year of the coronavirus pandemic, there will be no marches or rallies. Instead, we suggest you read a Rachel Carson book. Her writing is guaranteed to inspire and educate. The following are her major works:

Under the Sea Wind, Simon & Schuster, 1941
The Sea Around Us, Oxford University Press, 1951
The Edge of the Sea, Houghton Mifflin 1955
Silent Spring, Houghton Mifflin, 1962
The Sense of Wonder, HarperCollins, 1965, published posthumously

Rachel Carson is credited for giving birth to the modern environmental movement. Her best known book, Silent Spring, documented the devastating impact that indiscriminate use of pesticides have on wildlife and the environment. The impact of this book, published in 1962, cannot be overstated. It sold more than a half million copies in 24 countries and seared on people’s consciousness the link between pollution and the public’s health as well as the health of the planet.

The following year, 1963, Congress passed the Clean Air Act and the next year, the Wilderness Act. By 1969, Congress adopted the National Environmental Policy Act and in 1972, both the Clean Water Act and the Endangered Species Act. In 1970, Earth Day was launched, sparking a world-wide environmental movement that today celebrates its 50th birthday.

Rachel Louise Carson, born in 1907, was raised on a farm in western Pennsylvania. In her youth, nature and the books of Herman Melville, Robert Louis Stevenson and Joseph Conrad inspired her. These books sparked in her a life-long passion for the sea. In 1932, she obtained her master’s degree in zoology from John Hopkins and went on to work for the U.S. Bureau of Fisheries (later to become the U.S. Fish and Wildlife Service).

She began writing at an early age and regularly submitted poems as well as articles for publication. She was later dubbed “the scientist-poet of the sea.” It was in fact her poetic gifts combined with her rigorous scientific knowledge that made her writings so effective.

In 1937, when The Atlantic published her essay, “Undersea,” a vivid narrative of a journey along the ocean floor, Rachel Carson’s writing talent gained a serious audience. “Who has known the ocean?” she wrote. “Neither you nor I, with our earth-bound senses, know the foam and surge of the tide that beats over the crab hiding under the seaweed of his tide-pool home; or the lilt of the long, slow swells of mid-ocean, where shoals of wandering fish prey and are preyed upon, and the dolphin breaks the waves to breathe the upper atmosphere.”

Simon & Schuster asked Rachel Carson to expand her essay into a book, and in 1941, Under the Sea Wind was published. The Sea Around Us followed in 1950, a life history of the ocean that remained on the New York Times best seller list for 86 weeks and won the 1952 National Book Award for Nonfiction.

In 1953, aided by a Guggenheim Fellowship, Ms. Carson began the third volume of her sea trilogy, The Edge of the Sea. Originally conceived as a “field guide,” the work became much more than that, focusing on coastal ecosystems of the Atlantic shore. In this book, Carson was able to depict in her eloquent words how ocean life and the myriad environmental conditions they inhabit are all interconnected.

Silent Spring initially appeared serialized in three parts in The New Yorker magazine. She wrote this book as she was dying of cancer. The chemical industry did everything they could to discredit this work, but the power of her words still resonate today, 58 years later.

You can order Rachel Carson’s books through Little City Books.